A loose theme for the May 2019 collection of quotes for entrepreneurs is taken from a one sentence summary of Walter Lippmann’s 1922 book “Public Opinion” by Guido Hermann Stempel III and in Jacqueline Nash Gifford: “we don’t believe what we see; we see what we believe.”

Quotes for Entrepreneurs Collected in May 2019

A loose theme for the May 2019 collection of quotes for entrepreneurs is taken from a one sentence summary of Walter Lippmann’s 1922 book “Public Opinion” by Guido Hermann Stempel III and in Jacqueline Nash Gifford: “we don’t believe what we see; we see what we believe.” 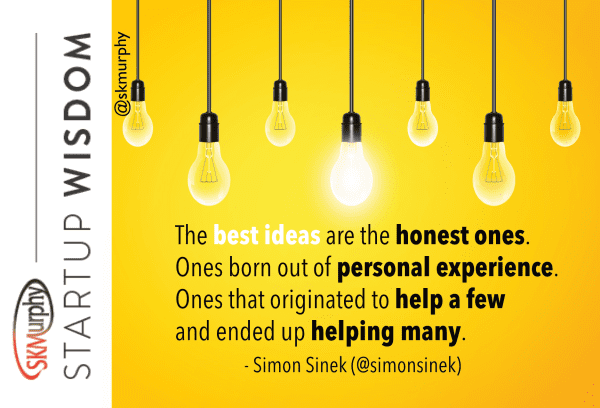 “The best ideas are the honest ones. Ones born out of personal experience.
Ones that originated to help a few and ended up helping many.”
Simon Sinek (@SimonSinek)

“The future is not a blank page; and neither is it an open book. The current notion that one has only to measure existing trends and to project, on a grander scale, the forces and institutions that dominate our present-day society in order to give a true picture of the future is based on another kind of illusion–the statistical illusion.

This method overweights those elements in the present which are observable and measurable and seemingly powerful, and it overlooks many other elements that are hidden, unmeasured irrational. In the third century A.D. an objective observer might well have predicted, on the basis of the imperial public works program, an increase number of baths, gladiatorial arenas, garrison towns, and aqueducts. But he would have had no anticipation of the real future, which was the product of a deep subjective rejection of the whole classic way of life and so moved not merely away from it but in the opposite direction.

Within three centuries the frontier garrisons were withdrawn, the Roman baths were closed, and some of the great Roman buildings were either being used as Christian churches or treated as quarries for building new structures. Can anyone who remembers this historic transformation believe that the rate of scientific and technological change must accelerate indefinitely or that this technological civilization will inevitably remain dominant and will absorb all the energies of life for its own narrow purposes–profit and power?

Lewis Mumford “Prospect” chapter in  “Man’s Role in Changing the Face of the Earth” (1956)
Available from Archive.org starts at page 1141 in text, 1179 in on-line version

“The man who forgets to be thankful has fallen asleep in life.”
Robert Louis Stevenson

“Looking back we can see how indirectly we know the environment in which nevertheless we live. We can see that the news of it comes to us now fast, now slowly; but that whatever we believe to be a true picture, we treat as if it were the environment itself.”

Serious study of political communication should begin with reading Walter Lippmann’s “Public Opinion.” Written three-quarters of a century ago in the context of World War I, it deals with the basics of political communication, which have not changed. Lippmann tells us that reality is “the pictures in our heads,” and he warns that “we don’t believe what we see; we see what we believe.”

It’s strange: although “we don’t believe what we see; we see what we believe” is enclosed in quotes it’s not in Lippmann’s book, the earlier quote is the closest that I could find. It’s useful to remember we can become prisoners of our preconceived paradigms and reject the evidence in front of our eyes.

“It requires a very unusual mind to undertake the analysis of the obvious.”
Alfred North Whitehead in Science and the Modern World (1925)

“If you can’t join them, beat them.”
Mort Saul, when asked to describe his motto.

h/t Dr Mardy Grothe (@drmardy) For some reason this reminds me of  Mark 9:40 “For the one who is not against us is for us.” If you let people contribute and take part they are less likely to work against you. A good rule of thumb to remember when building out partner ecosystems.

“58. Fools ignore complexity. Pragmatists suffer it. Some can avoid it. Geniuses remove it.”
Alan Perlis “Epigrams on Programming” SIGPLAN Notices Vol. 17, No. 9, September 1982

“Efficient search is serendipity’s implacable enemy.”
Aaron Haspel in “Everything“

“There is assuredly no more effectual method of clearing up one’s own mind on any subject than by talking it over, so to speak, with men of real power and grasp, who have considered it from a totally different point of view.”
Aphorisms and Reflections by Thomas Huxley

“Planning ahead, the best we can do is to choose with care our future regrets.”
Greg Norminton in “The Lost Art of Losing“

Regret minimization has a lot of value. When setting your price, pick a number that you are comfortable doing the work for and also comfortable if the prospect decides not to proceed. It’s still hard to resist the temptation to wish that you had asked for more once they say “Yes.”

“It’s easier to fill a gap than try to displace an incumbent.”
Sean Murphy

I left this as part of a comment in an entrepreneur forum and several folks complimented me on it so I thought I would include it in this month’s round up. Unfortunately it’s easier to see an incumbent’s success than the “negative space” of a market opportunity.

106. “We detect in ourselves what others conceal from us, and recognize in others what we conceal from ourselves.”
Vauvenargues in Maxims

“The goals we pursue are always veiled. A girl who longs for marriage longs for something she knows nothing about. The boy who hankers after fame has no idea what fame is. The thing that gives our every move its meaning is always totally unknown to us.”
Milan Kundera in The Unbearable Lightness of Being

“Almost without exception, organizations are run by people who want to protect the old business, not develop the new one.”
Seth Godin in “Watching the Times Struggle–And What You Can Learn” (2008)

Lots of organizations go through this analysis. How do you leverage your brand or your customer base to get to the next level, to enter new markets or new technologies–and do it while running your old business. And almost without exception, organizations are run by people who want to protect the old business, not develop the new one.

When you think about your business, realize that it is a combination of assets and constraints. The Times understood both, but suddenly, the constraints changed.