Lee Kuan Yew’s passing had me re-read “The Wit and Wisdom of Lee Kuan Yew” a book of quotes curated from public sources. I have added comments related to entrepreneurship. 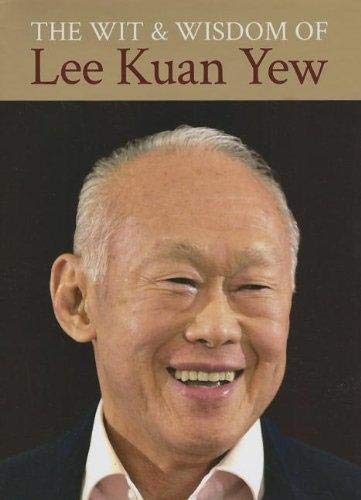 Lee Kuan Yew (16 September 1923 – 23 March 2015) governed Singapore as its first Prime Minister from 1959 to 1990. He shepherded the transformation of a small island economy into a first world technology leader. Here are some excerpts from “The Wit and Wisdom of Lee Kuan Yew” published in 2013, a collection of quotes curated from public sources.

“I have had to sing four national anthems: Britain’s God Save the Queen, Japan’s Kimigayo, Malaysia’s Negaraku, and finally  Singapore’s Majulah Singapura; such were the political upheavals of the last 60 years.”
Lee Kuan Yew

It’s a phenomenal transformation from a British colony to first world city state in 60 years. The rise of Four Asian Tigers–Hong Kong, Singapore, South Korea, and Taiwan–now serve as role models for many developing economies.

“We are the resource-poorest country in the region, and therefore we cannot afford to be other than honest, efficient, and capable if we are to stay out of trouble.”
Lee Kuan Yew

The port of Singapore is the third busiest port in the world over the last decade (second only to Ningbo and Shanhai). In a 1993 Wired article, William Gibson described Singapore as “Disneyland with the Death Penalty” but the island state has seen continued economic growth and few of the problems that have plagued some other multi-ethnic societies.

“One of the by-products of a migrant community is that it produces a population of triers. Whatever else they may lack, the offspring of migrants are prepared to try anything to improve themselves. Having left tradition, their history, their past behind, they have only the future to go in quest of.”
Lee Kuan Yew

“To understand the present and anticipate the future, one must know enough of the past, enough to have a sense of the history of a people. One must appreciate not merely what took place but more especially why it took place and in a particular way. This is true of individuals, as it is for nations.”
Lee Kuan Yew

It’s interesting to juxtapose these last two quotes, with immigrants casting off their past on the one hand but still relying on it for insights into the present and likely futures.

At some level this is a variation on the need for understanding history. The speaker’s personal history informs their use of a word just as the listener’s personal history particularizes their understanding. The listener’s knowledge of the speaker’s history allows them to appreciate the connotation, and the speakers knowledge of the listener allows them to select words and phrases that may resonate.

I am reminded of these challenges when someone tells me, “this is completely new, it’s like nothing you have ever seen before.” If you find yourself starting to say something like this realize two things: if true it communicates very little, and it’s not as useful as drawing analogies to things the listener has actually seen before.

“For over 30 years we have aimed for an egalitarian society. If we want to have successful entrepreneurs, Singaporeans have to accept a  greater income disparity between the successful and the not so successful.”
Lee Kuan Yew

I am not sure entrepreneurs are motivated only by money but encouraging creative destruction by internal business people before outside businesses obsolete local industries is a challenge for any successful country. For the most part entrepreneurship is about service: both sides have to see more value from an exchange that is freely entered into.

“As you solve one set of problems, new ones appear. That is part of the nature of life.”
Lee Kuan Yew

More opportunities for the next generation of entrepreneurs.

Postscript: Do Not Judge a Man Until You’ve Closed His Coffin

The Straits Times of Singapore ran a special edition Mar-23-2015 devoted to Lee Kuan Yew  that contained this quote from an interview in the New York Times Sep-1-2010: