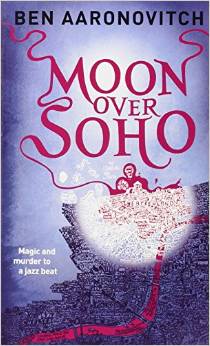 Some extracts with commentary from Ben Aaronovitch’s “Moon over Soho.” It’s the second in his “Rivers of London” series of novels about Peter Grant, a London Police Constable and apprentice magician. I have selected them to revisit yesterday’s “Nature, Technology and Magic” post.

The Imprint of Nature, Technology and Magic

“Vestigium is the imprint magic leaves on physical objects. Its a lot like a sense impression, like the memory of a smell or sound you once heard. You’ve probably felt it a hundred times a day but it gets mixed up with memories, daydreams, and even smells you’re smelling and sounds you’re hearing. Some things, stones for example, sop up everything that happens around them even when its barely magical at all–that’s what gives an old house its character. Other things, like the human body, are terrible at retaining vestigia–it takes the magical equivalent of a grenade going off to imprint anything on a corpse.”
Ben Aaronovitch  “Moon over Soho“

Think about how physical objects are imprinted by natural and human action. Almost everything in our modern living environment has been designed, with Nature working at the edges most of the time–save for the occasional thunderstorm, earthquake, drought, plague, and asteroid strike.

Technology Gets Smaller and Lighter Over Time

Dad carefully slipped the disk out and inspected it with a happy smile. He passed it to me. It had the surprising heft of a 78, much heavier than an LP; anyone weaned exclusively on CDs probably wouldn’t have been able to lift it. I took the edges of the heavy black disk between my palms and placed it carefully on the turntable. It hissed and popped as soon as the needle hit the groove and through that I heard Goodman make his intro on the clarinet.
Ben Aaronovitch  “Moon over Soho“

I can remember holding some of my grandfather’s 78’s as a teenager, it weighed about half a pound. By contrast a CD weighs about half an ounce or about 1/16 the weight. When I was on my honeymoon in Vancouver 26 years ago I heard a familiar sound that I took a few seconds to identify: it was the pop and hiss of a needle in an LP record groove: in the better part of a decade lasers had taken the static out of music and long distance telephone calls (at least over landlines for the latter, cell phones and VoIP retain some of the mystery of an old radio broadcast or well worn LP).

“The world was different before the war,” he said. “We didn’t have this instantaneous access to information that your generation has. The world was a bigger, more mysterious place we still dreamed of secret caves in the Mountains of the Moon, and tiger hunting in the Punjab.”

“After the war it was as if I was waking up from a dream”, said Nightingale. There were space rockets and computers and jumbo jets and it seemed like a natural thing that the magic would go away.”

“I don’t think the old world’s coming back anytime soon,” I said. “In fact, I think the new world might be arriving.”
Ben Aaronovitch  “Moon over Soho“

The impact of a new technology is hard to spot when your mental models are shepherding you along familiar paths that are obsolete.

Postmartin led us down a series of whitewashed brick passages to a no-nonsense metal security door marked NO ADMITTANCE. Postmartin used a swipe card on the security pad and punched in a combination. The door unlocked with a solid clunk and we trooped in to find a chamber with exactly the same shelves and climate control as the rest of the collection. There was a single institutional desk with a top bare except for what looked like the product of a loveless marriage between an early Mac and an IBM PC.

“Its an Amstrad PCW,” said Postmartin. “Before your time, I suppose.”

He sat down on a purple molded plastic chair and booted up the antique.

“No hardware connections, no USB ports, three-inch floppy disks that they don’t make anymore–this is security through obsolescence. They cannot hack, if I’m using the term correctly, what they cannot access.”

The screen was an alarming green color, monochrome I realized, like something from an old film. The three-inch disk actually clunked when the machine started to access it.
Ben Aaronovitch  “Moon over Soho“

An “air gap defense” will certainly work for a while. What’s interesting is that the Armistad was state of the art in 1985–only 30 years ago. The Cisco AGS router I learned networking on in 1990 is now on display in the Silicon Valley Computer History Museum. Even the Motorola V60 cell phone I carried in the early 2000’s is now a museum piece.

What’s interesting about cell phones is how much they were anticipated by Star Trek’s communicator. And how the lack of cell phones seems to date old movie plots more than most other technologies.

I Shot a Tiger Once…Twice Actually

Why don’t we just carry guns? I asked. I know you’ve got a roomful of them.

Well, for one thing, said Nightingale, the paperwork has become very tiresome, then there’s care, maintenance, and trying to ensure one doesn’t leave it on the Underground by mistake. Plus a fireball is more versatile and can pack more of a punch than any caliber pistol I’d be happy to carry.

“What’s the biggest thing you’ve zapped with a fireball?’ I asked.

“That would be a tiger,” said Nightingale.

“Not that sort of tiger,” said Nightingale. “A Panzer-kampfwagen sechs Ausf E.”

I stared at him. “You knocked out a Tiger tank with a fireball?”

“Actually I knocked out two,” said Nightingale. “I have to admit that the first one took three shots, one to disable the tracks, one through the driver’s eye slot and one down the commander’s hatch–brewed up rather nicely.”

“And the second Tiger?”

“I didn’t have time to be so clever with that one,” said Nightingale. “Straight frontal shot into the weak spot where the turret meets the hull. Must have caught the ammo store because it brewed up like a firework factory. The turret blew right off.”
Ben Aaronovitch  “Moon over Soho“

When you analyze the Apollo spacecraft and realized they traveled to the Moon and back, or think about the Polynesians navigating thousands of miles of oceans without maps or instruments in outrigger canoes you realize how much day to day bravery was required to get us where we are today.

“Dr. Walid let me watch while he fed my father into the MRI scanner at UCH. He sat a control desk complicated enough to launch a satellite into low earth orbit or mix a top-twenty hit. The magnetic drum in the scanner started to rotate with the sort of banging sound that makes you drive your car into the nearest garage.

When they’d finished with my dad, Dr. Walid turned to me and told me to strip off and get in the machine myself.

There’s something uniquely claustrophobic about sliding into an MRI scanner. The rotating magnets are on an industrial scale and generate a magnetic field sixty thousand times that of the earth. And they feed you into it wearing nothing but a hospital gown that lets a breeze flap around your privates.”

It’s funny how we take X-Rays and MRIs for granted, they are completely beyond anything in normal human experience. Obviously primitive men knew about the skeleton from the dead and internal anatomy as a side effect of warfare, but beyond holding you hand up to the sun and seeing the bones in your fingers while you are still breathing, it’s hard to find an analog. PET scans of the brain are even more fantastic, given insights into molecular biology events and allowing us to diagnose some conditions very early.

A Glimpse of the Future

“It’s weird watching an elderly parent when he’s half naked. You find yourself staring in fascination at the slack skin, the wrinkles, and the liver spots, and thinking one day all that will be yours.”
Ben Aaronovitch  “Moon over Soho“