Quotes For Entrepreneurs Collected in May 2018

“The engineer is both a scientist and a businessman. Engineering is a scientific profession, yet the test of the engineer’s work lies not in the laboratory, but in the marketplace.”
Edward Layton in “The Revolt of the Engineers“

“What concerns me is the tendency to marginalize people who disagree with you at meetings. There’s too much intolerance for challenge. As a leader, you can say the right things—for instance, everybody should share their opinions. But people are too smart to do that, because it’s risky. So when people raise an idea that doesn’t make sense to you as a leader, rather than ask what’s wrong with them, you should be curious about why they’re taking the position. Curiosity is a counterforce for contempt when people are making unpopular statements.”
Gary Klein in “Strategic Decisions: Can You Trust Your Gut” (2010)

It’s a conversation with Daniel Kahneman, well worth reading and as applicable to startups as larger firms.

Focus for effect and make sure that everyone on the team understands the schwerpunkt or strategic objective / focal point.

“The paper is never fully blank. We have countless assumptions about what our assets are, what’s achievable and where we’re comfortable. These assumptions could be suspended if we cared enough.

The best time to work with a clean sheet is long before you’re confronted with one.”

Seth Godin in “A clean sheet of paper“

Russell Ackoff defined creativity as the ability to remove constraints that only exist in your framing of a problem or design goal, not in the realities governing what is feasible. Still, we all face very real constraints on what we can achieve in a given period of time, even given the entrepreneur’s ability to marshal resources not under their direct control (h/t Howard Stevenson’s “entrepreneurship is the pursuit of opportunities beyond resources controlled”). In learning theory this is called the “zone of proximal” development, in optimization theory “the feasible region.” It’s OK to think out of the box to remove self-imposed limits. If optimism leads you to revisit assumptions and question whether you have overlooked something then it’s very helpful. But it’s wishful thinking to ignore reality, useless at best. Embrace constraints–once you have determined they are bona fide limits on your way forward–as a way to focus creativity

“Ignorance of the significance of facts renders us as blind to the solution of a problem as if we were matching colors in the dark.”
Edward Hodnett in “The Art of Problem Solving“

I found this book very useful for framing problems. It’s entirely non-mathematical but very insightful. To understand the significance of a fact you need a model. Pay attention to facts you discount based on your current model–it may need to be revised.

“The full importance of an epoch-making idea is often not perceived in the generation in which it is made: it starts the thoughts of the world on a new track, but the change of direction is not obvious until the turning-point has been left some way behind. In the same way the mechanical inventions of every age are apt to be underrated relatively to those of earlier times. For a new discovery is seldom fully effective for practical purposes till many minor improvements and subsidiary discoveries have gathered themselves around it: an invention that makes an epoch is very often a generation older than the epoch which it makes.”
Alfred Marshall in Principles of Economics (1890) Book Four: The Agents of Production: Land, Labour, and Capital and Organization Chapter 6 Industrial Training (fn 75)

“But is is a great thing, let me tell you, to understand the imperfections of our knowledge, and so to analyze its defects, as to be made aware what parts of a subject still remain (as it were) in the shade, and to be brought into clearer view by the light which further observations may bestow upon them.”
Peter Mere Latham in “Aphorisms from Latham“ 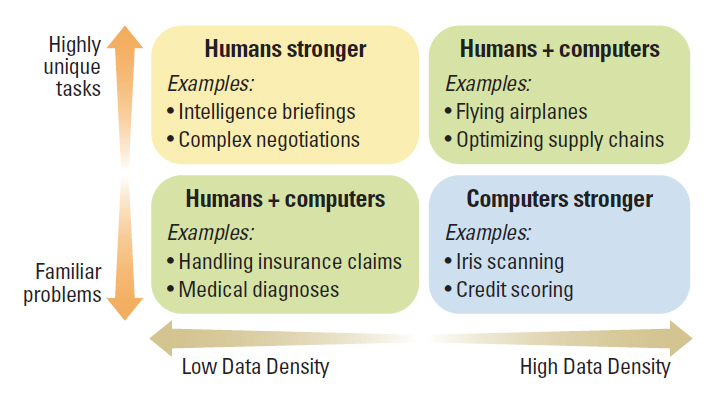 The Comparative Advantages of Humans and Computers

“Whether humans or computers have the upper hand depends on many factors, including whether the tasks being undertaken are familiar or unique. When tasks are familiar and much data is available, computers will likely beat humans by being data-driven and highly consistent. Although artificial intelligence is advancing rapidly, a general rule of thumb is that when tasks are unique and when data overload is not a problem for humans, humans likely have an advantage. In many situations, the strongest performance comes from humans and computers working together.”
Paul Schoemaker and Phillip Tetlock in “Building a More Intelligent Enterprise”

“Again, speculation in grain, for example by setting aside a certain class of persons to assume the risks of trade, has the effect of reducing these risks by putting them in the hands of those who have most knowledge, for, as we have seen, risk varies inversely with knowledge. In this way, the whole plane of business is put more nearly on a uniform basis so far as the rate of interest is concerned.

Risk is especially conspicuous in the financing of new inventions or discoveries where past experience is a poor guide. When new inventions are made, uncertainty is introduced, speculation follows, and then comes great wealth or great ruin according to the success or failure of the ventures. The history of gold and silver discoveries, of the invention of rubber, of steel, and of electrical appliances is filled with tales of wrecked fortunes, by the side of which stand the stories of the fortunes of those few who drew the lucky cards, and who are among today’s multi-millionaires.”
Irving Fisher “Theory of Interest“

“Attention and activity lead to mistakes as well as to successes; but a life spent in making mistakes is not only more honorable but more useful than a life spent doing nothing. The one lesson that comes out of all our theorizing and experimenting is that there is only one really scientific progressive method and that is the method of trial and error.”
George Bernard Shaw in “The Doctor’s Dilemma” (1911) in “Preface on Doctors” page LXXXV

“Leaders need to consciously cultivate the capacity to see more by deepening, widening, and lengthening their perspectives.

“Where there is no vision, the people perish.”
Proverbs 29:18

“Questions give data meaning: staring at data until patterns emerge is just another–popular–way to set money on fire.”
Erika Hall in “Dig in the Right Spot“

This is a great insight. One term for staring at data until patterns emerge is apophenia, a term coined in 1958 by Klaus Conrad who defined it as “unmotivated seeing of connections accompanied by a specific feeling of abnormal meaningfulness.”

“Uncertainty is the absence of information.”
Jay Galbraith

“Nothing has such power to broaden the mind as the ability to investigate systematically and truly all that comes under thy observation in life.”
Marcus Aurelius

“Great engineering organizations design products and efficient strategies to find solutions. These strategies generate the maximum valuable information with the minimum expenditure of time and money, using pass/fail tests with a 50 percent failure rate. Successful innovators explore possibilities systematically, modifying their next move with each result.”

“We find that in research a certain amount of intelligent ignorance is essential to progress; for, if you know too much, you won’t try the thing.”
Charles Kettering in “Professional Amateur” by T. A. Boyd

There is a risk that too much knowledge prevents you from seeing certain possibilities. My uncle John would sometimes observe: “It’s generally accepted, so generally accepted that it may not be true at all.” I am reading “Brilliant Mistakes” by Paul Schoemaker and this quote by Kettering (from perhaps a century ago now) certainly anticipates Shoemaker’s approach.

“Of the things we mistake for success, sticking around is the most common.”
George Murray

Survival is certainly a core element of success. You have to endure to be able to prevail.

h/t Brent Beshore (@BrentBeshore) who agrees but adds “Heavily time weighted: it’s easy to confuse short-lived survivals for success, new business models as revolutionary, and outliers as trends.” Sometimes it’s counter-intuitive why something has survived. For example antique chairs that are uncomfortable are not subject to the same wear and tear that comfortable chairs are, leaving the impression that our ancestors did not know how to design comfortable chairs.

“No criticism so sharp as seeing they think you need to be flattered.”
James Richardson

“The best cure for one’s bad tendencies is to see them fully developed in someone else.”
Alain De Botton (@AlainDeBotton)

Seeing them start to take root in your children can also lead to positive changes–at a minimum it leads to interesting conversations with your spouse about “Where does he get that?” Alas it’s not always possible to pass along your strengths or prevent your children from absorbing your weaknesses. Sometimes you have to be content with your example serving as a warning and allowing your children to develop their own strengths in areas you have not aptitude or affinity for. Employees can also absorb your weaknesses or be forced to work around or compensate for them.

“Winners show they are sorry by changing their actions.
Losers say, “I’m sorry,” but do the same thing next time.”
Sydney J. Harris in “Winners and Losers“

Used in “12 From Sydney J. Harris’ “Winners and Losers” For Entrepreneurs”

“The more talent density you have the less process you need.
The more process you create the less talent you retain.”
Reed Hastings

I think it depends upon the environment the team is operating in. Pilots don’t feel stifled by pre-flight checklists. Teams developing of class 3 medical devices, feature length animations, or next generation silicon devices rely on a rich set of processes to minimize risk. I would have to believe the site reliability engineers at Netflix–where Hastings is CEO–have a wealth of process they rely on to minimize downtown and to recover from infrastructure failures and cyber attacks.

“If we will be quiet and ready enough, we shall find compensation in every disappointment.”
Henry David Thoreau

Surprise or disappointment indicate you have to the opportunity to learn something. Of course, learning–like survival–is always optional.

“It is not hard work which is dreary; it is superficial work.”
Edith Hamilton

“There is only one proof of ability–action.”
Marie von Ebner-Eschenbach

Even more true for a group, team, firm, or organization than an individual. Also a key criterion for prospects assessing your startup.

“The classical virtues are all decision-making heuristics to make one optimize for the long term rather than for the short term.”
Naval Ravikant (@naval)

“When you work with great people, the shared daily struggle becomes its own reward.”
Brent Beshore (@BrentBeshore))

A danger foreseen is half avoided.
A disease known is half cured.
A grain of prudence is worth a pound of craft.
A journey were better too long than dangerous.
As the wind blows, seek your shelter.

I have heard the term “sharecropping on another platform” but this captures the fundamental disconnect of developing an asset you cannot easily move on someone else’s platform and encourages making a clear distinction between archive and distribution. This advice also applies to group facilitation platforms where you don’t have clear rights to access members except through the platform (e.g LinkedIn Groups, Meetup) vs. Yahoo Groups, MailChimp, iContact. The podcast was inspired by John Batelle’s “Do Not Build Your Brand House on Land You Don’t Own”

In particular while I am happy we selected WordPress, Eventbrite, and Mailchimp as platforms I regret investing effort and social capital in Meetup and LinkedIn Groups. Currently neutral on Twitter, Linkedin (Profile), iContact, and Medium.