Quotes For Entrepreneurs Collected in December 2018

“The child had every toy his father ever wanted.”
Robert Whitten

“Science is devoted to acquiring knowledge and understanding; engineering is directed toward the creation of new systems or productions.”
Thomas T. Woodson “Introduction to Engineering Design” (1966)

Merton’s book offers a personalized interpolation of four other translations of Chuang Tzu. He offers no additional notes or interpretation.

I used this in “Learning from John Perry Barlow’s Principles of Adult Behavior” and “Austin Kleon’s ‘Keep Going’ Offers Practical Advice on Perseverance.” I think most good things that appear to happen quickly–the overnight success so cherished by the “bullshit industrial complex” of entrepreneurial journalism–are where chance meets hard work, preparation and planning.

“I am a product of long corridors, empty sunlit rooms, upstairs indoor silences, attics explored in solitude, distant noises of gurgling cisterns and pipes, and the noise of wind under the tiles. Also, of endless books.”
C.S. Lewis

“My father, growing, I suppose, in prosperity, decided to leave the semidetached villa in which I had been born and build himself a much larger house, further out into what was then the country. The ‘New House,’ as we continued for years to call it, was a large one even by my present standards; to a child it seemed less like a house than a city. […] I am a product of long corridors, empty sunlit rooms, upstairs indoor silences, attics explored in solitude, distant noises of gurgling cisterns and pipes, and the noise of wind under the tiles. Also, of endless books. My father bought all the books he read and never got rid of any of them. There were books in the study, books in the drawing room, books in the cloakroom, books (two deep) in the great bookcase in the landing, books in a bedroom, books piled as high as my shoulder in the cistern attic, books of all kinds reflecting every transient stage of my parents’ interest, books readable and unreadable, books suitable for a child and books most emphatically not. Nothing was forbidden me. In the seemingly endless rainy afternoons I took volume after volume from the shelves. I had always the same certainty of finding a book that was new to me as a man who walks in a field has of finding a new blade of grass.”
C.S. Lewis in Surprised by Joy: The Shape of My Early Life

“The problem with a relentless drive to cut costs and drive efficiency is you often end up impeding the interoperability and exploration it takes to create value.”
Greg Satell in “Business Pundits Love to Say These 4 Things — None of Them Are True“

The four items and his key counter-suggestions, the quote comes from #3:

“Ye who now will bless the poor, Shall yourselves find blessing”
closing couplet to “Good King Wenceslaus” lyrics by John Mason Neale

Two weather descriptions in the song you won’t understand if you’ve only lived in Silicon Valley:

When the snow lay round about, deep, and crisp, and even;
Brightly shone the moon that night, though the frost was cruel,

Through the rude wind’s wild lament and the bitter weather.

“There is nothing that saps one’s confidence as the knowing how to do a thing.”
Mark Twain in a speech on May 30 1902 at the Hannibal High School Graduation Exercise

h/t “Mark Twain Speaking” by Paul Fatout: pp. 431-434 “May 30 – High School Graduation, Park Theater, Hannibal, Missouri.”  Twain had traveled back to Hannibal Missouri where he was born; he saw old friends and was invited to give a number of speeches. I blogged about this in Mark Twain on “Coming Home” This particular remark was his preface to handing out diplomas, something he did in a haphazard fashion encouraging students to trade until they had the correct one. Related quote from his autobiography:

“It is strange the way the ignorant and inexperienced so often and so undeservedly succeed when the informed and the experienced fail.”
Mark Twain in “Autobiography of Mark Twain“

“Meta-design is much more difficult than design; it’s easier to draw something than to explain how to draw it.”
Donald Knuth in The Metafont Book, (1986)

I think it’s difficult to extract your own construction or problem solving rule and make them explicit so that others can use them. I blogged about this in “The Limits of I’ll Know it When I see it.” Harder still is to construct a system of rule or a pattern language that yields a systematic methodology for problem solving. It’s hard to shift form “first person” to “third person” and harder still to systematize your approach for the benefit of others. But the benefits are enormous–it becomes a coachable point of view or a transferable expertise. If you want to grow your business you have to be able to make good decisions and then you need to teach others on the team how to do it, and to learn from their complementary expertise.

Entrepreneurs can confuse generating ideas for products with discerning customer needs that can unlock new markets.

“Courage is more than standing for a firm conviction. It includes the risk of questioning that conviction. Without courage and questioning, little creativity is possible.”
Julia Weber Gordon in “The Courage to Do” in “The Journal of childhood education” volume 40 issue 5 January 1964

Julia Weber Gordon is also the author of “My Country School Diary.” She had a distinguished career as an teacher and educator.

“Practice before you need it so that when you do you will have it.”
Steve Pressfield in “Turning Pro“

“If I were to wish for anything, I should not wish for wealth and power, but for the passionate sense of the potential, for the eye which, ever young and ardent, sees the possible. Pleasure disappoints, possibility never.”
Soren Kierkegaard

I think this is what make entrepreneurship an challenging calling: the need to cultivate your ability to detect the latent potential in a situation or problem and then to summon the will and skill to see it transmuted into reality.

‘The quality of a leader is reflected in the standards they set for themselves.”
Ray Kroc

“There are no unnatural or supernatural phenomena, only very large gaps in our knowledge of what is natural, particularly regarding relatively rare occurrences.”
Edgar Mitchell

“Success is more a function of consistent common sense than it is of genius.”
An Wang in “Lessons: An Autobiography”

“Common sense is not so common.”
Voltaire

“Common sense is judgment without reflection, shared by an entire class, an entire people, an entire nation, or the whole human race. […] Uniform ideas originating among entire peoples unknown to each other must have a common ground of truth.”
Giambattista Vico in “The New Science” [Archive.Org cite]

“Common sense in an uncommon degree is what the world calls wisdom.”
Samuel Taylor Coleridge

“Value is generated when the capital required to get a business to sustainability (usually positive cash flow, but I will include exits here) is meaningfully less than what the business is worth when sustainability is reached.”
Fred Wilson in “The Profit Motive“

“In most industries four classes of drivers account for most of the change: new technology or science,  new regulation or other government or political action, new social or demographic trends, and new competitive behavior. 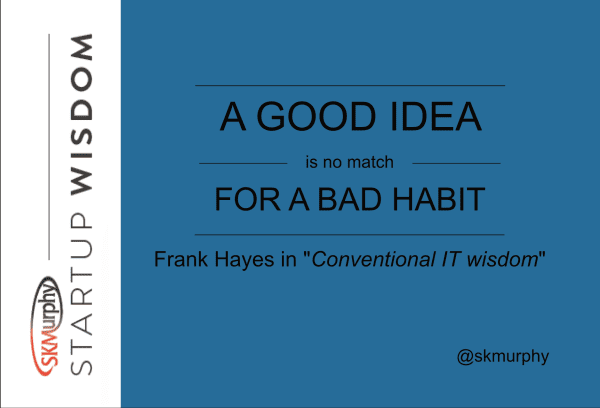 “A Good Idea is No Match for a Bad Habit.”
Frank Hayes

A closing quote for 2018 to help with your New Year’s resolutions, I blogged about this in 2007 “A Good Idea is No Match for a Bad Habit”