My November 2019 collection of quotes for entrepreneurs has a focus on finding a calling and aligning your startup with a higher purpose.

Quotes For Entrepreneurs Collected in November 2019

This month’s theme is on finding a calling and aligning your startup with a higher purpose. I collect these quotes for entrepreneurs from a variety of sources and tweet them on @skmurphy about once a day where you can get them hot off the mojo wire. At the end of each month I curate them in a blog post that adds commentary and may contain a longer passage from the same source for context. Please enter your E-mail address if you would like to have new blog posts sent to you.

My focus this month is on finding a calling and aligning your startup with a higher purpose.

“Go against the rules if you must, but never go against your conscience, even if the rules demand it.”
Alexander Den Heijer

“Eventually a life of missed school functions and family events and other personal milestones takes its toll. These are not things you can get back.”
Donald Rumsfeld in “Rumsfeld’s Rules“

“If an ass goes traveling he will not come home a horse.”
Thomas Fuller

It’s hard for someone to change their fundamental nature.

“Nature never said to me: Do not be poor.
Still less did she say: Be rich.
Her cry to me was always: Be independent.”
Sebastien-Roch Nicolas de Chamfort

I think autonomy is the key motivation for most entrepreneurs.

“Patience and tenacity of purpose are worth more than twice their weight of cleverness.”
Thomas Henry Huxley

Realistic plans and viable designs all involve trade-offs. This reminds me of a quote I used in June 2017 I found in the forward to “War in 2020” by Ralph Peters

One watches things that make one sick at heart.
This is the law: No gain without a loss,
and Heaven hurts fair women for sheer spite.

“The Tale of Kieu” translated by Huyn Sanh Thong

“Quiet minds cannot be perplexed or frightened, but go on in fortune or misfortune at their own private pace, like the ticking of a clock in a thunderstorm.”
Robert Louis Stevenson

“Cathy, I’m lost, I said though I knew she was sleeping
And I’m empty and aching and I don’t know why.”
Paul Simon and Art Garfunkel “America”

Morale and mutual support key to a team of entrepreneurs persevering.

Nine Lies About Work by Marcus Buckingham and Ashley Goodall 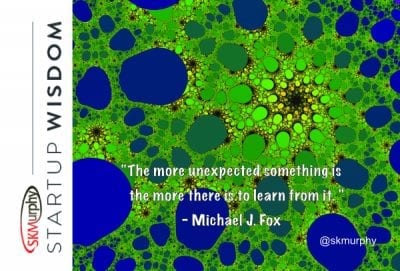 “The more unexpected something is, the more there is to learn from it.”
Michael J. Fox

“I went to my first computer conference at the New York Hilton about 20 years ago. When somebody there predicted the market for microprocessors would eventually be in the millions, someone else said, “Where are they all going to go? It’s not like you need a computer in every doorknob!” Years later, I went back to the same hotel. I noticed the room keys had been replaced by electronic cards you slide into slots in the doors. There was a computer in every doorknob.”
Danny Hillis (1999)

“To all my gentle readers who have treated me with love for over 30 years, I must say farewell. It has always been my ambition to die in harness with my head face down on a keyboard and my nose caught between two of the keys, but that’s not the way it worked out. I have had a long and happy life and I have no complaints about the ending, thereof, and so farewell – farewell.”
Isaac Asimov in “Farewell, Farewell” (published posthumously in “The Magazine of Fantasy & Science Fiction” August 1992)

Many versions of the quote start with “it has always been my ambition” and end with “between two of the keys” robbing it of it’s poignancy and wisdom.

“You can never tell what apparently small discovery will lead to. Somebody discovers something and immediately a host of experimenters and inventors are playing all the variations upon it. Take Faraday’s experiments with copper disks. Looked like a scientific plaything, didn’t it? Well, it eventually gave us the trolly car. Or take Crooke’s tubes; looked like an academic discovery, but we got the X-ray from it. A whole host of experimenters are at work today; what great things their discoveries will lead to, no one can foretell. You are asking if the age of invention is over when we don’t know anything yet.”
Thomas Edison in Jan-12-1908 Washington Post article “America’s Thinking Men Forecast the Wonders of the Future.”

h/t Morgan Housel “The Wonders of the Future”

“There are thinkers who claim that, if the modern age began with the discovery of America, it also ended in America. This is said to have occurred in the year 1969, when America sent the first men to the moon.

I think there are good reasons for suggesting that the modern age has ended. Today, many things indicate that we are going thorough a transitional period, when it seems that something is on the way out and something else is painfully being born. It is as if something were crumbling, decaying, and exhausting itself, while something else, still indistinct, were arising from the rubble.”

It’s a great speech that also contains this observation: “Until recently, it might have seemed that we were an unhappy bit of mildew on a heavenly body whirling in space among many that have no mildew on them at all.” We live in a narrow range of height from the surface of a small planet.

“Sooner or later I’m going to die, but I’m not going to retire.”
Margaret Mead

I think this is one of the hallmarks of  a calling–as distinct from a career or a job–is an energizing purpose that you can dedicate your life to. I think entrepreneurship is a calling for some, a tactic for others, and sometimes a dire necessity in an economic downturn. In 2021, many firms may give their employees the opportunity to become entrepreneurs.

“Just as the map is not the territory, so too an algorithm is never the care that is given”
Enrico Coiera (@EnricoCoiera) in “On algorithms, machines, and medicine” [warning: paywall] (Lancet Oncology Dec-21-2018)

We recognize the limits and risks of a rule-following bureaucracy, but have been slower to understand them for algorithms applied to human needs. More context

Abstract: Algorithms, neural networks, guidelines, and protocols–these all can only ever model aspects of a reality that is move complex and fickle. As we move into a world dominated by algorithms and machine-learned clinical recipes, we must deeply understand the difference between what a machine says and what we must do.
Enrico Coiera (@EnricoCoiera) in “On algorithms, machines, and medicine” [warning: paywall] (Lancet Oncology Dec-21-2018)

“Institutions will try to preserve the problem to which they are the solution.”
Clay Shirky

h/t Kevin Kelly who calls this “The Shirky Principle.” It’s a persistence of vision after the ground has shifted. This makes the behavior of large established firms more predictable and enables startups to seize greenfield opportunities that are likely to be uncontested by incumbents.

“When you throw a rock into the water, it will speed on the fastest course to the bottom of the water. This is how it is when Siddhartha has a goal, a resolution. Siddhartha does nothing, he waits, he thinks, he fasts, but he passes through the things of the world like a rock through water, without doing anything, without stirring; he is drawn, he lets himself fall. His goal attracts him, because he doesn’t let anything enter his soul which might oppose the goal. […]

A nice metaphor for finding a higher purpose. I interpret “fast” here to mean not only not eating but ignoring or letting go of minor matters.

“I thought it was fantastic, and I don’t mean extraordinarily good or attractive. I mean imaginative, fanciful, remote from reality.”
Steve Tadelis quoted in “The new dot com bubble is here: it’s called online advertising” by Jesse Frederik and Maurits Martijn

Fundamental critique is that some firms are spending to preach to the converted, they are are not increasing net sales because their message is reaching prospects who are already in the process of buying.

“It wouldn’t help some fellers if opportunity broke the door in.”
Kin Hubbard in “Short Furrows“

Pro Tip: Work Harder. And take a break every now and again to give thanks to folks who have helped you. Some thoughts on a the Wednesday before Thanksgiving and two quotes related from my September 2017 collection:

It’s a very positive talk, someone trying to offer practical advice on living with his own death clearly in view.

He had told an earlier anecdote that sheds some light how his parents formed his approach to life.

“When I was here studying to get my Ph.D. and I was taking something called the theory qualifier, which I can definitively say is the second worst thing in my life after chemotherapy. And I was complaining to my mother about how hard this test was and how awful it was, and she just leaned over and she patted me on the arm and she said, we know how you feel honey, and remember when your father was your age he was fighting the Germans.”
Randy Pausch in “The Last Lecture [transcript]“

Pausch’s father served as a medic in World War Two and was awarded a Bronze Star for Valor for his service in the Battle of the Bulge. I originally referenced these two quotes in “Quotes for Entrepreneurs Collected in September 2017”

75. “Consciousness of our powers augments them.”
Vavenargues

I think this is true and reminds me of

“They can because they think they can.”
Virgil

“Imagine Tim Berners Lee had built the Web the same way folks built Twitter. All our web pages would be would be hosted by a single company, accessed through an API that they defined and could change at whim. Web applications would be far weaker than they are today (since it would be hard to store anything interesting on TimCo’s servers) and powerful corporations would constantly be knocking people offline permanently for various terms-of-service violations (no trademark infringement! no hate speech!).”
Aaron Swartz in “What Do Startup Founders Want?” (2012)

h/t Gordon Mohr (@gojomo). I had to check the date, Swartz was prescient on pressures twitter would face and their temptation to completely lock down their interface. I think one of the reasons for Cisco’s success in the 90’s was a willingness to create viable ecosystems that included competitors and support standards bodies (e.g. IETF) that enabled innovation. I had been thinking about standards based innovation, where a set of companies determine collectively how they will compete and how they will collaborate, and the tremendous benefits they have delivered vs. monopoly or government mandated models.

“No matter how far you have gone on the wrong road, turn back.”
Turkish proverb

“Part of getting over it is knowing you will never get over it.”
Anne Finger in “Past Due”

“A hero is a man who is afraid to run away.”
English Proverb