Both of our sons were able to join us for Thanksgiving 2019. It was wonderful. We ended up in a conversation about George Washington, I have included his 1798 proclamation that established Thanksgiving as a national holiday in the US. 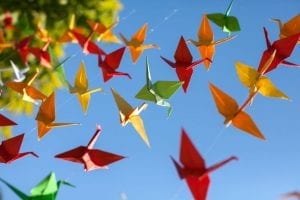 My younger son is in his last few weeks of college, but he was able to take time out to join us for Thanksgiving 2019. My older son graduated a few years ago but was also able to take part. It was wonderful.

We watched season 4 of “The Man in the High Castle.” It was somewhat disappointing, but I found several scenes quite powerful. They showed the American who comes to lead the US on behalf of the Reich betraying a good friend and realizing that embracing the heart of darkness–no matter how much power it brings–only leads to the death of the soul.

Our discussion of the last season led to a conversation about how fortunate the United States was to have George Washington, a successful military commander, provide leadership for eight years after the end of the fighting to make sure a new nation was on a secure footing. The amazing thing was not that he was elected, but that he stepped down afterward instead of seizing power as dictator for life. Here is a proclamation he issued in 1789 that established Thanksgiving as a national holiday in the United States.

Now therefore I do recommend and assign Thursday the 26th day of November next to be devoted by the People of these States to the service of that great and glorious Being, who is the beneficent Author of all the good that was, that is, or that will be—That we may then all unite in rendering unto him our sincere and humble thanks—for his kind care and protection of the People of this Country previous to their becoming a Nation—for the signal and manifold mercies, and the favorable interpositions of his Providence which we experienced in the course and conclusion of the late war—for the great degree of tranquillity, union, and plenty, which we have since enjoyed—for the peaceable and rational manner, in which we have been enabled to establish constitutions of government for our safety and happiness, and particularly the national One now lately instituted—for the civil and religious liberty with which we are blessed; and the means we have of acquiring and diffusing useful knowledge; and in general for all the great and various favors which he hath been pleased to confer upon us.

I hope your Thanksgiving gave you as much contentment as mine did for me.

Photo Credit: “Origami Birds Flock Together” © Ruslan Iefremov (Licensed from 123RF / Image ID: 43869476) I picked this because it had the traditional Thanksgiving colors.