For Thanksgiving 2016 we hosted the Bootstrapper Potluck for the third year in a row, it’s becoming a tradition we really enjoy. 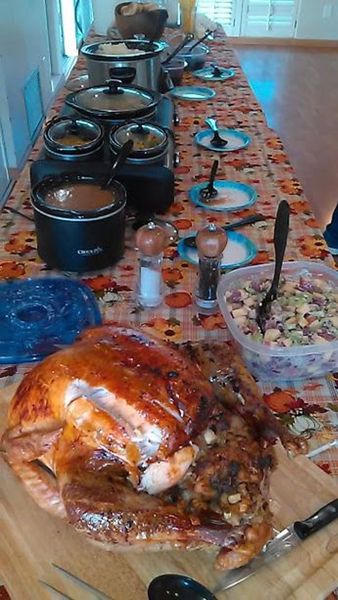 Once more we we had a Bootstrapper Potluck for Thanksgiving 2016, inviting entrepreneurs with the following:

Don’t have family to visit on Thanksgiving? Join us for Thanksgiving dinner. Bring drinks or your favorite dish to share.

We are supplying the turkey and some sides and are looking forward to a Bootstrapper Thanksgiving,

with about a dozen folks from the Bootstrappers Breakfast. It was a blast. My boys came back from college and took part. It’s a tradition that started as an experiment three years ago that we will do again next year. December is normally a very busy time for us in the business for whatever reason–clients realizing they need to plan for next year, customers that need to spend money by year end asking our clients for proposals–it was nice to get a break now as we normally work the last two weeks of the year and then take time off in mid-February.

The first Thanksgiving feast is often credited to the Pilgrims at Plymouth Massachusetts in November of 1621. Their ship, the Mayflower,  carried a mix of religious separatists and tradesmen and workers who all intended to start a new life in the colony of Virginia. The had landed at Cape Cod, outside of the boundaries of the colony, where winter storms and dwindling supplies forced them to reconsider their objective.

I SHALL a little return back and begin with a combination made by them before they came ashore, being the first foundation of their government in this place; occasioned partly by the discontented & mutinous speeches that some of the strangers among them had let fall from them in the ship–That when they came ashore they would use their own liberty; for none had power to command them, the patent they had being for Virginia, and not for New-england, which belonged to an other Government, with which the Virginia Company had nothing to do. And partly that such an act by them done (this their condition considered) might be as firm as any patent, and in some respects more sure.”
William Bradford in “Of Plymouth Plantation“

“This day before we came to harbor, observing some not well affected to unity and concord, but gave some appearance of faction, it was thought good there should be an association and agreement that we should combine together in one body, and to submit to such government and governors as we should by common consent agree to make and choose, and set our hands to this that follows word for word.”
Edward Winslow in Mourt’s Relation

So they drafted the “Mayflower Compact” that was signed by all of the male passengers, recommitting to  “covenant and combine ourselves together into a civil Body Politick, for our better Ordering and Preservation:”

“In the name of God, Amen. We, whose names are underwritten, the Loyal Subjects of our dread Sovereign Lord, King James, by the Grace of God, of England, France and Ireland, King, Defender of the Faith, e&. Having undertaken for the Glory of God, and Advancement of the Christian Faith, and the Honour of our King and Country, a voyage to plant the first colony in the northern parts of Virginia; do by these presents, solemnly and mutually in the Presence of God and one of another, covenant and combine ourselves together into a civil Body Politick, for our better Ordering and Preservation, and Furtherance of the Ends aforesaid; And by Virtue hereof to enact, constitute, and frame, such just and equal Laws, Ordinances, Acts, Constitutions and Offices, from time to time, as shall be thought most meet and convenient for the General good of the Colony; unto which we promise all due submission and obedience. In Witness whereof we have hereunto subscribed our names at Cape Cod the eleventh of November, in the Reign of our Sovereign Lord, King James of England, France and Ireland, the eighteenth, and of Scotland the fifty-fourth. Anno Domini, 1620.”
Edward Winslow in Mourt’s Relation

It’s an interesting pivot, forced by circumstances by as many pivots are, from joining the Virginia Colony to forming their own. They knew that although they were going ashore they were still effectively all in the same boat and would need to pull together to survive. Like many startups the Mayflower was a mixture of folks on a mission (the dissenters) and those who were focused primarily on making their fortune in the New World (the strangers).  Within six months about half of the colonists, and the Mayflower crew members who wintered with them before returning to England, would be dead. But the other half persevered and it’s likely that the compact laid the foundations for what was ultimately a successful settlement.

“One of these remarkable incidents is the execution of that instrument of government by which they formed themselves into a body politic, the day after their arrival upon the coast, and previous to their first landing.

That is, perhaps, the only instance in human history of that positive, original social compact, which speculative philosophers have imagined as the only legitimate source of government.

Here was a unanimous and personal assent, by all the individuals of the community, to the association by which they became a nation. It was the result of circumstances and discussions which had occurred during their passage from Europe, and is a full demonstration that the nature of civil government, abstracted from the political institutions of their native country, had been an object of their serious meditation.”

John Adams in “Oration at Plymouth”
Delivered at Plymouth Mass. December 22, 1802 in Commemoration of the Landing of the Pilgrims

2 thoughts on “Thanksgiving 2016: Bootstrappers Potluck and Reflections on Mayflower Compact”