2020 is a leap year and where February is awarded an extra day. The theme for this collection of quotes for entrepreneurs: what will you do to make use of the extra time?

Quotes for Entrepreneurs Collected in February 2020

These quotes for entrepreneurs were collected in February 2020. The theme: it’s a leap year! What will you do to make use of the extra day in February?

“Anger blows out the lamp of the mind. In the examination of a great and important question, everyone should be serene, slow-pulsed and calm.”
Robert Ingersoll

“The true job an entrepreneur is to systematically de-risk their business model.”
Ash Maurya (@AshMaurya)

“Frustrated by the lack of rigorous research, we undertook a statistical study of thousands of companies, and eventually identified several hundred among them that have done well enough for a long enough period of time to qualify as truly exceptional. Then we discovered something startling: The many and diverse choices that made certain companies great were consistent with just three seemingly elementary rules:

For the most part this wasn’t my problem, tests acted as a useful deadline and I responded very well–for the most part–to the pressure of taking tests (it’s some side effect of ADD I believe, probably boosts dopamine enabling focus). I never really learned how to study and instead followed my own interests. Some subjects came easily and it was almost as if I was remembering something. Of course I can recall many instances of insights gleaned from my formal education–most of them from other students.

“The future is best dealt with using assumptions rather than forecasts.”
Russell Ackoff

“By strategy, I mean a cohesive response to a challenge. A real strategy is neither a document nor a forecast but rather an overall approach based on a diagnosis of a challenge. The most important element of a strategy is a coherent viewpoint about the forces at work, not a plan.”
Richard Rumelt in “Strategy in a Structural Break“

I used the last sentence of this quote in my July 2017 collection but I think the first two sentences add a lot.

“Falling into despair won’t help anyone. You can curse the darkness or you can light a candle. I’m getting a fucking welding torch.”
James Carville in “We’re losing our damn minds“

I included this because it’s a turn of phrase that a founder might use. It’s a profane riff on

“Yet is it far better to light the candle than to curse the darkness.”
William L. Watkins

Visualization: the use of computer-supported, interactive, visual representations of data to amplify cognition.
Cognition is the acquisition or use of knowledge.

“The purpose of computation is insight, not numbers.”
Richard Hamming

“The purpose of visualization is insight, not pictures. The main goals of this insight are discovery, decision-making and explanation.”
Information visualization is useful to the extent that it increases our ability to perform these and other cognitive activities.
Stuart Card, Jock D. Jackinlay, Ben Shneiderman in “Readings in Information Visualization: Using Vision to Think” 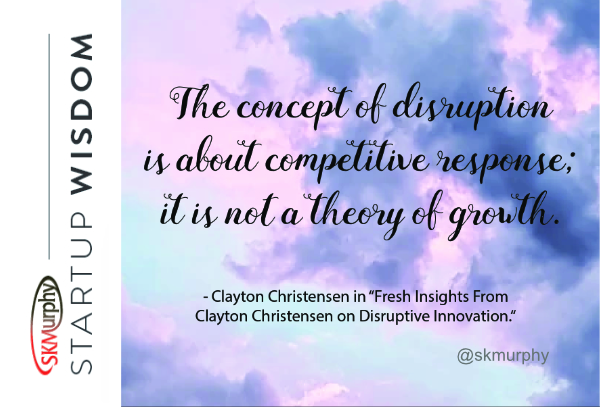 h/t Horace Dediu (@asymco).  See also “What is Disruptive Innovation” (HBR Dec-2015). I originally used this in my “Quotes for Entrepreneurs Collected in December 2015.” I am recycling it here because we have added it to our Startup Wisdom postcard collection.

“The desire for success lubricates secret prostitutions in the soul.”
Smiley Blanton (1882-1996)

“Unless and until all members of a team have a common understanding of the problem, attempts to solve the problem are just so much wasted energy.”
Gerald Weinberg “Becoming a Technical Leader”

25. “Before setting out to attack an abuse, we should see if we can undermine its foundations.”
Luc de Clapiers, Marquis de Vauvenargues

“Every day something inevitably goes wrong. Fix it, and as soon as possible. Don’t fret over trouble that might easily be removed. Fixing it may cause a little trouble or pain; but fix it.”
Edgar Watson Howe “Ventures in Common Sense“

Strive for resilience as much as robustness.

“The trouble with farming is that there’s always something you ought to be doing.”
Kin Hubbard in Abe Martin’s Home Cured Philosophy (1919)

Alas also true for many forms of self-employment including bootstrapping a startup.

“It’s easier to hold to your principles 100% of the time than it is to hold to them 98% of the time. If you give in to “just this once,” you’ll regret where you end up. You’ve got to define for yourself what you stand for and draw the line in a safe place.”
Clayton Christensen in “How Will You Measure Your Life“

This is from one of the excerpts I used in “Clayton Christensen on ‘How Will You Measure Your Life?’”

I used this in “Clayton Christensen on ‘How Will You Measure Your Life?’”

Do you take time in your meetings to really ensure that everyone shares the view of what the problem is?  I have been to many meetings where the conflict is really due to the fact that each person is trying to solve a different problem.”

“Bravery is being the only one who knows you’re afraid.”
Franklin P Jones

“They tell you that when you hear hoofbeats, you should think “horses” not “zebras.”
What they don’t tell you is that lions don’t make a sound when they’re stalking.
You will be blindsided by something you missed, sooner or later.
It is inevitable.
It is human.
It is okay.”
Sayed A Tabatabai (@TheRealDoctorT)

It’s important to remind mindful of unknown unknowns without losing your willingness to take risks. Challenge is to leave a margin for error and a reserve of resources to enable resiliency and recovery.

“In prosperity, prepare for change; in adversity, hope for one.”
James Burgh

“Failure is not fatal. Failure should be our teacher, nor our undertaker. It should challenge us to new heights of accomplishments, not pull us to new depths of despair. From honest failure can come valuable experience.”
William Arthur Ward

“Curiosity is one of the most permanent and certain characteristics of a vigorous mind.”
Samuel Johnson

I think it’s a trait but can be a learned skill for entrepreneurs. Certainly a structured approach to exploration can complement a natural curiosity.

“Genius, in truth, means little more than the faculty of perceiving in an unhabitual way.”
William James

“The great difference between the real leader and the pretender is that the one sees into the future, while the other regards only the present; the one lives by the day, and acts upon expediency; the other acts on enduring principles and for the immortality.”
Edmund Burke

“To be mature means to face, and not evade, every fresh crisis that comes.”
Fritz Kunkel

“There are no solutions. There are only trade-offs.”
Thomas Sowell in “A Conflict of Visions“

“No doubt, there are even stranger discoveries to be made…some totally new phenomenon perhaps…Somewhere, something incredible is waiting to be known.”
Sharon Begley

“I make lists to keep my anxiety level down. If I write down 15 things to be done, I lose that vague, nagging sense that there are an overwhelming number of things to be done, all of which are on the brink of being forgotten.”
Mary Roach

“We are now likely embarking on a new era of innovation that will be very different than the digital age. Rather than focused on one technology, concentrated in one geographical area and dominated by a handful of industry giants, it will be widely dispersed and made up of a diverse group of interlocking ecosystems of talent, technology and information.

Make no mistake. The future will not be digital. Instead, we will need to learn how to integrate a diverse set of technologies to re-imagine atoms in the physical world.”

“The natural state of a business is to become known to its target market, but keep its secrets and success hidden to avoid competition.

Growing up in an entrepreneurial family for the first 15 years of my life I learned to never brag about my successes, but to show vulnerability and connect/help the vulnerability shown by fellow founders, because your network is a lot more likely to help you that way.

In Silicon Valley that impetus is reversed. Desire for investors flips the publicity of most SV companies in an unnatural way. You see a market, you lift it like a big juicy steak in the air and you announce to everyone how much money you have to go after it. That instantly gets everyone else interested in the game and everyone has a big public race to burn as much money as possible until the last one or two standing get to public offering. Consumer startups are the exception as they inherently need the exposure. Hidden Champions pick niche, perfect a product that wins it, and own it quietly.”