The theme for this month’s collection of quotes for entrepreneurs is managing uncertainty with imagination, knowledge, and kindness.

This month’s collection of quotes for entrepreneurs address managing uncertainty with imagination, knowledge, and kindness.

“True genius resides in the capacity for evaluation of uncertain, hazardous, and conflicting information.”
Winston Churchill

“Lists bring order to the chaotic universe. I love making lists. Whenever I need to figure out my life, I make a list. A list gets all of your ideas out of your head and clears the mental space so you’re actually able to do something about them.

When I am overwhelmed, I fall back on the old fashioned to-do list. I make a big list of everything that needs to get done, I pick the most pressing thing to do, and I do it. Then I cross it off the list and pick another thing to do. Repeat.”

I used this in “Austin Kleon on Making Lists: To-Do, Ideas, and Do’s & Don’ts”

“I am living through my third ‘reset’ in Silicon Valley. Reputations are built in hard times, not the easy times. If you shake a hand, sign your name – stand strong, or your word is no good. Otherwise you are a transient that only wanted the easy take. And you should move on.”
Bill Gurley (@bgurley) Mar 16 tweet

“Checking on a couple friends and neighbors is more productive than worrying about the fate of the world.”
John D. Cook (@JohnDCook)

“What do people do when they’re acting like entrepreneurs?

Seth Godin in “The four elements of entrepreneurship“

Essentially an entrepreneurial mindset embraces ambiguity and uncertainty as opportunity. It looks at variance as enabling progress and improvement.

“The problem I consistently see is companies applying a reduce variability language and playbook to the embrace variability game of thinking.”

There are really only three kinds of meetings:

“Ideas are elusive, slippery things. Best to keep a pad of paper and a pencil at your bedside, so you can stab them during the night before they get away.”
Earl Nightingale

I carry 3×5 cards for the same reason. I write down other people’s good ideas as well. It takes a lot of good ideas–some old and some new–to make something new and useful happen. Often you have to let go of some obsolete ideas that are misleading.

There’s more than one answer to these questions
Pointing me in a crooked line
And the less I seek my source for some definitive
The closer I am to fine, yeah”
Indigo Girls in “Closer to Fine”

“Imagination grows by exercise, and contrary to common belief, is more powerful in the mature than in the young.”
W. Somerset Maugham

“A good time to remember that the most important part of a plan is planning on your plan not going according to plan.”
Morgan Housel (@morganhousel)

If you cannot think of three things that are likely to go wrong, then you have not given it enough thought. I ended my post “How to Tell When Your Team Has a Workable Plan of Action with this quote:

“When we think about what might go wrong, we’re more likely to design something that goes right.”
Seth Godin in “Good Design (and serial numbers)“

“There’s nothing written in the Bible, Old or New Testament, that says, ‘If you believe in Me, you ain’t going to have no troubles.'”
Ray Charles

“Getting money is not all a man’s business; to cultivate kindness is a valuable part of the business of life.”
Samuel Johnson

“Kindness is good business” was the four word summary of Johnson’s aphorism. Here are two other folks this occurred to (I am sure there are many others):

“Our accomplishments in quantity distribution and services have been made possible by the voluntary cooperation of thousands of mature individuals. We present them to you, both as a practical manifestation of the brotherhood of man and the fact that kindness is good business.”
Ethel Percy Andrus  in testimony on health needs of aged and aging before the US Senate in 1960. (Google Books)

Andrus founded the California Retired Teachers Association and the AARP.

“Startups don’t win by attacking. They win by transcending. There are exceptions of course, but usually the way to win is to race ahead, not to stop and fight.”
Paul Graham in “Mean People Fail” (2014)

This reminds me of a quote by Buckminster Fuller I collected back in 2009:

This is a key concept in competing against either the status quo or existing products. Ultimately you have to obsolete them if you want to win. This normally includes the need to remix and re-purpose the assets available in the current environment, which leads to this second quote by Fuller: “Don’t fight forces. Use them.” I have used this in two different blog posts:

“You have a chronic anxiety level connected to a hyperactive mind that’s plugged into an analytic level of consciousness. There’s no rest or rhythm. It’s all high-pitch. There’s a continual idiosyncratic intensity that’s exhausting.”
Susan Shapiro in “How I Got My Shrink Back”

The quote is her therapist’s diagnosis of her condition and an explanation for why he called her “his most taxing patient.” I thought this paired well with Andrew Grove’s “only the paranoid survive” as guidance for entrepreneurs.

“As in a game of cards, so in the game of life, we must play what is dealt to us, and the glory consists, not so much in winning, as in playing a poor hand well. ”
Josh Billings

This is the “plain English” version of

“Knowledge of what is possible is the beginning of happiness.”
George Santayana

“Remember that life is neither pain nor pleasure; it is serious business, to be entered upon with courage and in a spirit of self-sacrifice. ”
Alexis De Tocqueville

“There is a big difference between using math descriptively to do an accurate forecast of how bad things will be, and using math to identify operational leverage points to change the outcome. In my experience many engineers are biased towards the latter, and many scientists towards the former.”
Donald Reinertsen (@DReinertsen)

“It’s not the media’s role to present the world as it really is. They will always have to compete to engage our attention with exciting stories and dramatic narratives. It is upon us consumers to realize that news is not very useful for understanding the world.”
Hans Rosling

“I don’t know anything about luck. I’ve never banked on it, and I’m afraid of people who do. Luck to me is something else; hard work and realizing what is opportunity and what isn’t.”
Lucille Ball

“Maturity is the ability to think, speak and act your feelings within the bounds of dignity. The measure of your maturity is how spiritual you become during the midst of your frustrations.”
Samuel Ullman

“Most people are more comfortable with old problems than with new solutions.”
Charles Brower

“Every revolution was first a thought in one man’s mind.”
Ralph Waldo Emerson

A lot of things that have not been done before will be accomplished in the next 3-6 months to get us to a new normal.

“There is a great difference between knowing and understanding: you can know a lot about something and not really understand it.”
Charles F. Kettering

“Uncertainty amid danger feels awful. So it’s comforting to have strong opinions even if you have no idea what you’re talking about, because shrugging your shoulders feels reckless when the stakes are high. Complex things are always uncertain, uncertainty feels dangerous, and having an answer makes danger feel reduced. We want firm answers when things are the most uncertain, which is when firm answers don’t really exist.”
Morgan Housel in Corona Panic

“There is no law of progress. Our future is in our own hands, to make or to mar. It will be an uphill fight to the end, and would we have it otherwise? Let no one suppose that evolution will ever exempt us from struggles. ‘You forget,’ said the Devil, with a chuckle, ‘that I have been evolving too.'”
William Ralph Inge

“When we least expect it, life sets us a challenge to test our courage and willingness to change; at such a moment, there is no point in pretending that nothing has happened or in saying that we are not ready. The challenge will not wait. Life does not look back.”
Paul Coehlo

At the beginning of the month I picked a theme for the March 2020 collection of quotes for entrepreneurs: “managing uncertainty with imagination, knowledge, and kindness.” But by the end of the month it was clear that the single largest source of uncertainty was the Covid-19 pandemic. I found this set of six questions by Brooke Anderson very helpful for managing what is still under your control. 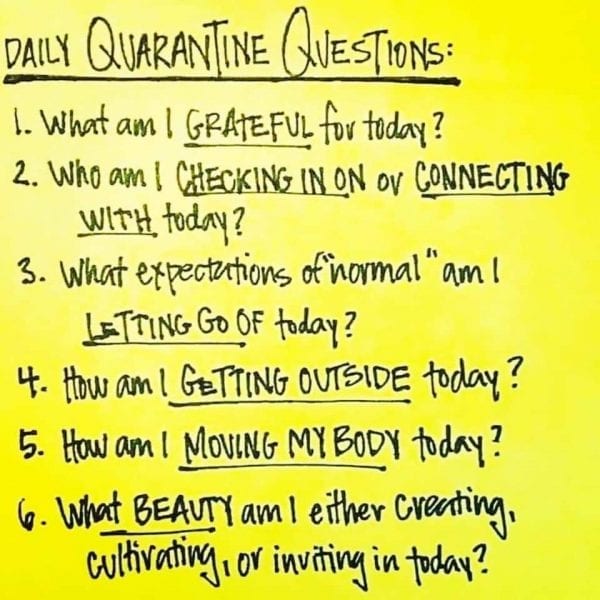