Ev Rogers’ seminal book, “Diffusion of Innovation” describes how people adopt innovations, e.g. new technology. He assumed a normal distribution of risk aversion. Geoffrey Moore’s insight was the chasm:  the early majority is not influenced by early adopters, they want the comforts of an established market.

Human nature is risk averse: most of us don’t like change. We would rather struggle with the beast we know than risk our jobs on a new technology that may not deliver it’s promises. But if the current situation is painful enough, we will adopt something new and risk changing the way we have always done it.

So how do you cross the chasm between the risk tolerant early adopters and risk averse early majority when introducing new technologies?

Look niche markets of early majority prospects who are in a lot of pain. If people are in enough pain they will change their behavior and risk adopting something new. 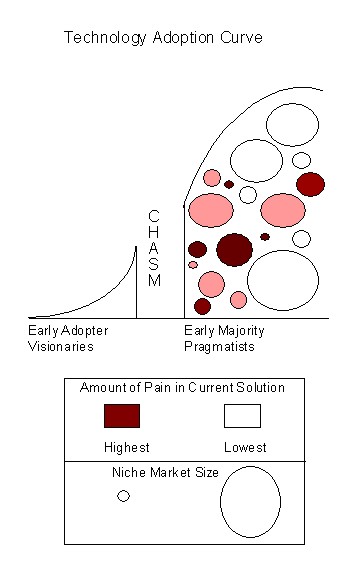 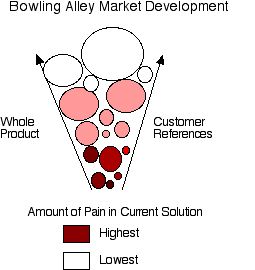 After entering niche markets, we can move technology up and out by using the ones in the most pain as reference case studies to the others. Also notice you start with the smallest niche market. This will allow you to make your early mistakes on a smaller market. It also buys you time and expertise to develop a whole product. Early majority prospects will not invest very much time or effort (very little compared to early adopters) to get your solution to work in their environment.

One you are across the chasm into your first niche, you want to continue to evaluate adjacent niches (those that would have some members who would be influenced by your current customers) that still have a lot of pain. Moore refers to this as the Bowling Alley, we show a representation slightly different from his where we sort going from smallest to largest in the most pain to less pain.