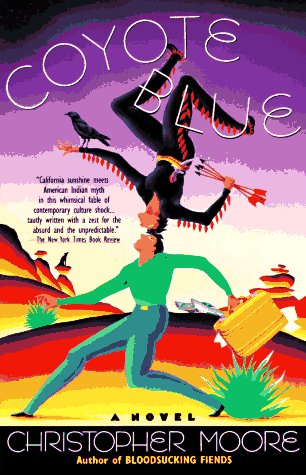 novel “Coyote Blue.” is full of personal observations and asides that I found very applicable to the entrepreneurial roller coaster.

In his author’s note he writes:

Do you ever get the feeling that forces unseen are messing with your life? Yeah, me too. And there is little doubt that those forces are driven by the greatest force in the universe — irony, right? Right?

So imagine my surprise when, some years ago, while I was researching a book on demons, I kept running across references to tricksters, and one trickster in particular, the trickster god Coyote. I thought, Here is a god whose main function seems to be acting as an agent of irony — the special prosecutor of Murphy’s Law, if you will. And, I figured, if ever there was a time during which the god of irony seemed to be testing his powers that time would be now.

What entrepreneur has not been at least indicted by the “special prosecutor for Murphy’s Law?”

Here are a few excerpts

“When everything is right with you, but you are so worried that something might go wrong that it ruins your balance, then you are Coyote Blue.”

Those of us with a firm grasp of contingencies are familiar with the uneasy feeling that “things are going too well, I must have overlooked something.” Startups are often well served by having at least one member of the team with this attitude, although–like cayenne pepper or wasabe–a pinch or two is often enough to season an elephant’s worth of stew.

“There are those who, deprived of physical beauty, develop a sincerity and beauty of spirit that seems to eclipse their appearance. They marry for love, stay married, and raise happy children who are quick to laugh and slow to judge.”

Good advice for many technical entrepreneurs and–in hindsight–my plan of record as well.

“Before the television arrived Samson did not know he was poor. Now he spent every evening piled in the front room with his family watching people he did not know do things he did not understand in places he could not fathom, while the commercials told him he could be just like those people.”

I gave up my television a few years ago and was surprised at how much more time that I had. Last month I spent two days in bed in a room with a television and after I finished the book I had brought with me, “No Way In” by Richard Fernandez, I spent an hour or two getting re-acquainted with how Samson feels in this passage. Many firms appear to be hard at work to port this same experience to the web. More’s the pity.

“The ostentation of the casinos did not create a desire for money; it made money meaningless. There were no mortgages in a casino, no children needing food, no car needing repairs, no work, no time, no day, no night; those things–the context of money–were someplace else. A place where people returned before they realized that a turd rolled in rhinestones is a turd nonetheless.”

Other web firms are hard at work to bring this experience to the web. Please apply your talents to another problem.

“He followed the signs down the surface streets lined with pawnshops, convenience stores, and low-slung cinder-block buildings under neon signs that proclaimed, CASH FOR YOUR CAR, CHECKS CASHED HERE, MARRIAGES AND DIVORCES–TWENTY-FOUR-HOUR DRIVE-THRU WINDOW.

Coyote said, “What are these places?”

Sam tried to think of a quick explanation, but was too weary from lack of sleep to tackle the concept of Las Vegas in twenty-five words or less. Finally he said, “These are places where you go if you want to fuck up your life and you don’t have a lot of time to do it in.”

“No, I seem to be fucking up at a fine rate of speed, thank you.”

Bootstrappers often feel this conflicted when they  think about reaching out to a venture capital firm.

“That’s the scary thing about hope, if you let it go too long it turns into faith.”

In the end, launching an entrepreneurial venture is hope that persists into a leap to faith.