3D scanners unlock another side of 3D printing; instead of creating an object straight from scratch 3D scanners allow for pre-existing objects to be digitized for remodeling, repairing, and customizing.

Laser scanner has a sensor that collects information from a laser that goes over the object’s entire surface.  This process provides a digital triangulated mesh of the object which then can be opened up in a CAD software for remodeling, repairing, and customizing. Laser scanners are either handheld or set up on a rotating platform; however, the platform scanner have a size constraint but compared to the size independent hand scanners are far more accurate and faster.  There will always be these two types as I don’t think one will ever replace the other.

Scanning by probing is done by CMM devices or coordinate measuring machines which collect enough information from the physical probe on the object’s surface to construct the digital form of the object.  Most of these machines have six degrees of freedom.  The CMM method is more efficient of determining the geometric object rather than organic objects.

Laser scanning and probing are consider to be contact forms of scanning while photogrammetry is not since it is scanning by stitching several photos of the object together to create a 3D model.  This last scanning method can actually be performed on your smartphone.  With Autodesk’s 123D Catch you take a series of photos from your camera, phone, tablet and upload them to Autodesk’s cloud service in return you get the 3D model.  They also have a professional service called ReCap.

Today there are three setbacks for the 3D scanners, the scanners can only read at the surface level, they cannot determine the type of material scanned in, and their inability to scan transparent or reflective objects.

Scanners can only read at the surface level

Scanners can’t determine the material they are scanning

The next obstacle is determining the material in the scan.  This may more important in the future for reverse engineering or determining the mixture o materials used like food or cake mix.  There are the CMM machines that may be able to determine the material touching the probe.  The researchers at the University of Oviedo have developed a graphene scanner that can 3D model beyond the surface of objects.  Their graphene scanner can also identify “the chemical composition of its materials.”  Their focus with this scanner is ancient artifacts and paintings, but this scanner could be applied to many different areas.  It is also interesting to look at other industry that also could benefit from 3D scanning and discover what other industry have already made progress in 3D scanning. 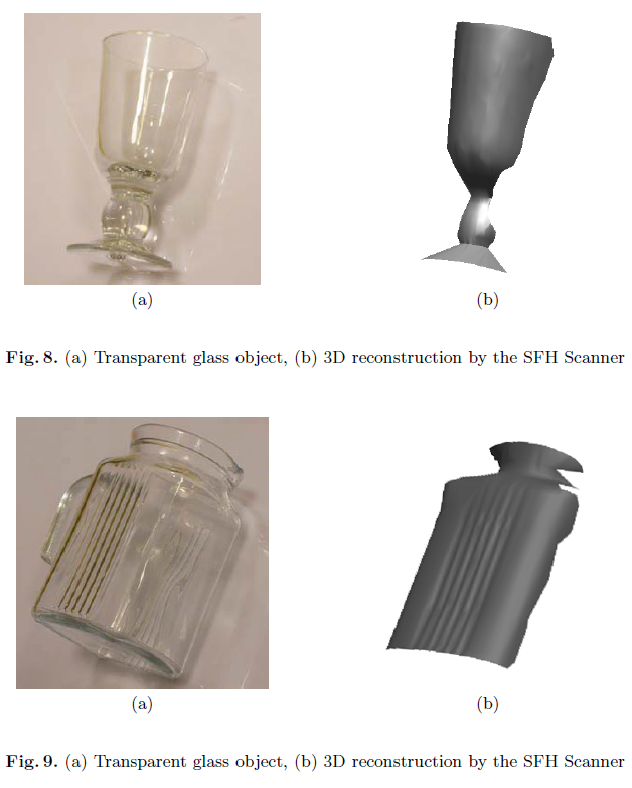 There is a process called Scanning From Heating (SFH) developed by several people from various universities.  The reflections of the laser beam on the glass doesn’t affect this scanning process because the camera sensor captures the location of the emission of the thermal radiation caused by the laser and not the projection of the laser beam.  However, the object must be opaque to the point where the the laser beam can’t pass through the object.  The article concludes with the hope of future work of projecting a matrix of points to “improve the 3D point acquisition speed and precision.”

There seems to be no good way to scan reflective objects, but adding a rotating mirror under objects helps with the laser scanning process.  Adding the rotating mirror base speeds up the laser scanning process and inabilities hidden features to be better scanned; however, there is the noise geometry created by the two interfering laser scans when features of the object can be seen by both laser scans.  They list various solutions to this problem. Place the mirror only to see the unseen parts and “when the object is placed over a mirror, is placing the object to be scanned over a pedestal that keeps it away from the mirror surface (if possible, using pedestal colored such it is not acquired by the scanner). This technique works because the zone of contact between object and the mirror is where the multiple laser stripes are more frequent Moreover, the use of a pedestal is also useful because lifting the object allows to see better its bottom part.”

3D scanners are going to play a huge part in the future of 3D printing and other industries.  3D scanners allow for pre-existing objects to be digitized for remodeling, repairing, and customizing and can be capture process are usually under one of the three main 3D scanning processes: laser scanning, probing, and photogrammetry. 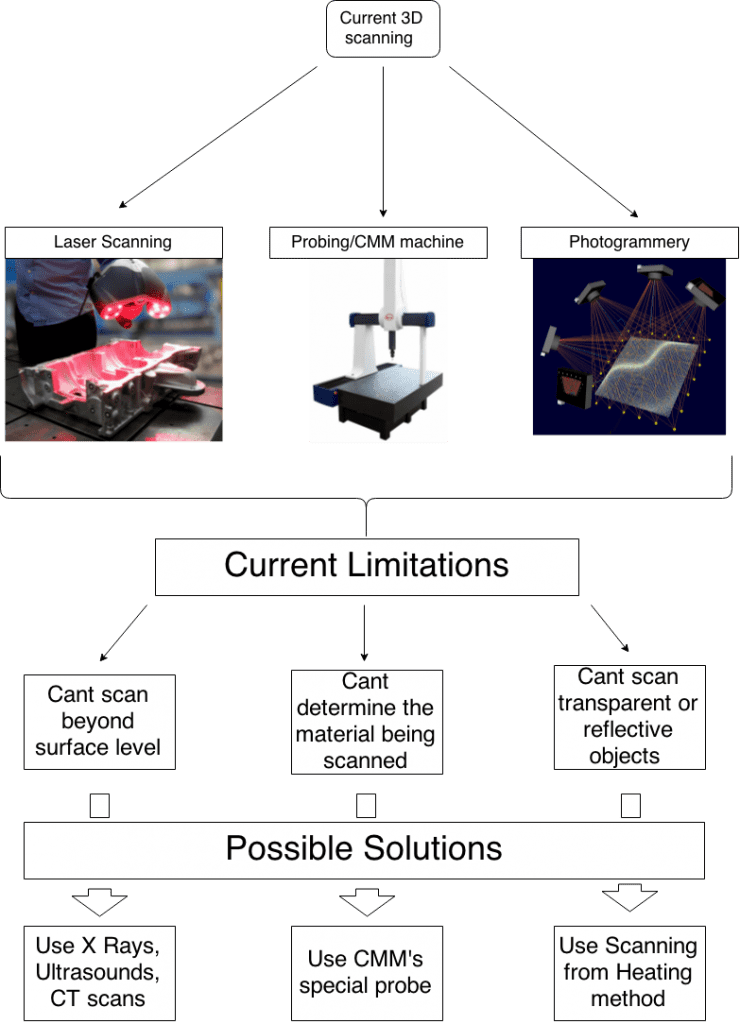 Max Murphy is Mechanical Engineering student in his Junior year at California Baptist University. He is interested in the implications of 3D printing or positive manufacturing for mechanical design.  He is currently an intern at Soundfit, one of the companies that is part of the Bay Area Advanced Manufacturing Hub (BAAM), where he is gaining hands on experience with a 3D printer and scanner and an intern at Neodyne Biosciences working with the R&D and Q&A departments.