I got to know Edith Harbaugh (@edith_h) when she was moderating the Lean Startup Circle Group and published two guest blog posts by her: “It’s Your Execution, Not Your Idea” and “Managing Email Conversations With Customers.” I also invited her to take part in a webinar on Innovator’s DNA: Experimenting Skill. During the roundtable conversation she mentioned some lessons learned from a bicycle trip across the United States–I thought to myself, anyone willing to bike across the country is ready to become a technology entrepreneur. So when she emailed me that she had co-founded LaunchDarkly I reached out to interview her. What follows is an edited transcript.

Sean: Welcome, can you talk a little bit about how biking across the country was good preparation for LaunchDarkly.

Edith: You need to have a general idea of where you’re going, but you’re always going to be changing stuff on the way. The road you want to go on might have construction, the cafe you wanted to stop at might be shut for lunch, somebody might say, hey, you should really go to this other town. You cannot have a rigid plan for  where you’re going to go through every week and execute. You have to have goals but you have to be  flexible along the way.

Sean: Can you talk a little bit your background? 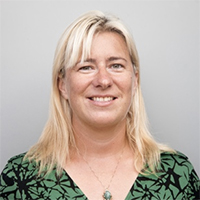 Edith: I am a product person with an engineering background.

I have a BS Engineering from Harvey Mudd College and an Economics degree from Pomona. My first job was in engineering at an enterprise startup and I have a couple of patents on portal deployment as a result. I decided consumers have more fun and I worked at a consumer startup.

I became a product person because of my frustrations in engineering with six to nine month release cycles. We would be so excited about the release we would throw a party but when it got into customers’ hands they would either hate it or just not use it.  It got to be too painful spending late nights and weekends working on stuff that nobody would use: I thought if I got closer to the customer I would be able to understand what they needed so that they would use what we built.

Once I did what became very clear was that the only thing a customer cares about is if your product solves a problem. If it’s new and cool and desirable that’s kind of gravy, but they don’t care about that. They care whether it saves time, makes their life easier, gets them a promotion.

Sean: Sometimes you talk to one person and they tell you they have all these requirements and then you find out that either they’re kind of in their own little cubicle or when the team starts to use it 7 of 10 requirements just never get used.

Edith: It’s funny you can talk to different people at the same company, much less different buyers at different companies, and get very different suggestions for what capabilities you need to have.

Sean: Is this what led you to develop LaunchDarkly? You wanted to make sure that features that are requested are actually getting used?

Edith: Yeah, the genesis of LaunchDarkly came from two different directions: Lean Startup and continuous deployment models. With Lean Startup there was a drive to break features into smaller and smaller chunks of functionality so that you could put them in front of customers or prospects and get feedback to iterate quickly. With continuous deployment you are pushing features out but you would like to control which customers see them.

I was working at TripIt and seeing the problem from the product management side and my co-founder, John Kodumal, was working at Atlassian and seeing the need from the engineering side. We realized that large firms like Amazon, Facebook, and Netflix could develop their own custom infrastructure to manage the continuous deployment of features subsets to each customer but that small and medium size firms could not afford the investment. We had this mutual “Aha!” moment where we realized we were looking at two different aspects of the same need.

It was basically something that came out of my interest in the Lean Startup Movement and getting features to users faster as well as John’s interest in continuous deployment and making sure that good code can be reconfigured in a timely fashion.

Sean: But both you and John had good jobs with successful firms, what made you decide to start bootstrapping LaunchDarkly?

Edith: It’s fun. I’ve been in startups and there are definitely highs and lows, but when you talk to a potential customer and they say, “What you’re talking about is exactly what I want, if you go build that I will use it”, that feels incredibly good.

I’m a huge fan of Lean Startup, so we started having conversations with people I thought might be interested to see if they would want something like this. Classic customer development: we didn’t have a line of code, we hadn’t built anything. When we had enough people that said, “Yes, we would use that” then we started coding.

Sean:  Do you have any kind of case studies or testimonial up yet?

Edith: Yes, Grant Lee, one of our really early beta customers wrote a blog post on “Feature Flags at Flite” which concludes:

We at Flite are fortunate to have bumped into LaunchDarkly, a service that gives you a powerful way to take control of how features are released to your customers. Like many startups or even non-startups, we have our own home-grown system for controlling features. It is very similar to how many experts in the field describe implementing feature flags using config files and the like. Basically, it’s something you can flip on/off while code is in production and does not require new code to be deployed or servers to be restarted. But with LaunchDarkly, you can literally get all of that and more without having to burden your existing code base with feature flag specific stuff that isn’t core to your actual product or service.

We also have a case study up about WorkHands where Patrick Cushing commented, “LaunchDarkly allows us to easily control feature launches–who sees what and when–without multiple deploys from our engineering team.”

Sean: What are some of the key capabilities that your customers rely on?

Edith: The key problem they have is that they want to control which customers see which new features so that they can get feedback from the right people first and do a controlled rollout to manage any side effects or unanticipated problems. You don’t need ten customers–or in the case of healthcare.gov tens of thousands–to tell you about the same problem to fix it.

Sean: Any lessons learned for bootstrappers?

Edith: Let people know what you’re doing. When John and I started we put up a very simple landing page and updated our LinkedIn profile and from that we had a lot of people who contacted us wanting to learn more. This led to a lot of really interesting customer development interviews and let us discover who was–and who was not–a good customer for us.  I never would have gotten that if we tried to be in stealth. Be willing and open to talking to everybody at the beginning.

Sean: I agree; I think you should be open enough to attract the right kind of prospects.  I think telling people we’re in stealth mode is never a good idea. It’s like playing the game “I’ve got a secret” from grade school. I think you should have a story, the story should be true, but you don’t have to tell the entire story. Sometimes you can attack a less attractive aspect of a problem and use that as a foothold.

The risk with announcing all of your roadmap is that the one thing that a larger company can do is to stall you with a competing roadmap. If you are able to ship the feature set today then normally they cannot stall you if the prospect is in enough pain. And it can be a partial solution as long as it is an improvement over whatever else is available today. But I think you have to be careful writing a datasheet in the future tense: at least in B2B I think most folks will give you four to six weeks, perhaps two months to deliver something.

But you are selling what I would call mission critical infrastructure, since the correct presentation of the features set is integral to customer needs. If you inadvertently delete key features or don’t present them–perhaps because of a bug or misconfiguration. I think you’re perhaps a little more at risk from getting stalled by a larger player than a startup that has a standalone application that does analysis or translation but where your failure doesn’t present an immediate problem for customer experience.

Edith: Yeah, I hear you. We’ve been on the other side of the table and appreciate this is a critical need. We have invested a lot of time and effort in testing and customer evaluation to address that.

I have a second lesson that may be little silly but it’s actually useful. When I was at TripIt people would generally come to me but now that I am in a startup I go to them, and I have meetings all over San Francisco. It’s actually quicker to bike than take a taxi or Muni. I can be downtown in 10 minutes on a bike versus 25 minutes on Muni.

Sean: Do you find the bike rides also help clear your mind?

Edith: Oh absolutely. I also run ultramarathons–I did a hundred mile race in November for example–and I do a lot of my best thinking when I’m outside running because I don’t have as many distractions: email, phone calls, etc… I find running and biking outside clears my mind and allows me to make connections that I wouldn’t otherwise.

Sean: When I net it out, you and John had successful careers but in different disciplines: you were not two engineers or two product people starting a company. You both have worked at content management companies–Vignette for you and Atlassian for John–and I think many of the things you learned about content management and controlling the presentation of content are applicable to the management and presentation of features. You both knew a lot of folks either in engineering or product management who might need the feature controls that LaunchDarkly offers. So you had a breadth of relevant domain expertise and a fair amount of social capital.