Derek Sivers promises that his slim book “Anything You Want” is a one hour read that summarizes 10 years of his entrepreneurial experience into 40 lessons for a new kind of entrepreneur. It’s a practical book that’s well organized and easy to read. It took me much longer than an hour to actually absorb the lessons he offers here–I found myself thinking about it for several days after I read it–if only because he offers profound insights not quick tips. But I knew after I read the first chapter where he summarized his key lessons learned it was a book I would be recommending to other entrepreneurs. 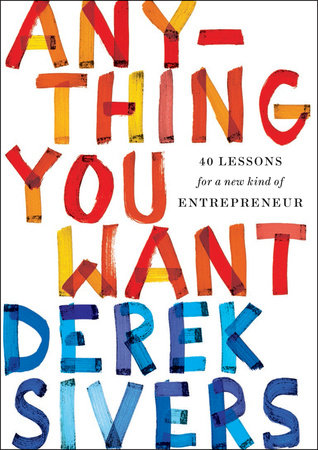 Derek Sivers Anything You Want

“Making a company is a great way to improve the world while improving yourself.”
Derek Sivers in “Anything You Want“

You and your business remain works in progress.  This implicit need for co-evolution between your skills and the total capabilities of the business are ideally a virtuous cycle of self-reinforcing improvement.

“Never do anything just for the money.”
Derek Sivers in “Anything You Want“

Money is a means not an end. If people don’t want to pay for your product or service that indicates it’s not providing value, or that you have priced it incorrectly.

“Don’t pursue business just for your own gain. Only answer calls for help.”
Derek Sivers in “Anything You Want“

I like this image of situating your business in a community you are trying to help. It creates  three pole model where you are committed to personal improvement, to improving the capabilities of the business, and improving at least the situation if not the possibilities for  your target customer set.

Doing the same thing over and over and expecting a different result is not persistence, it’s insanity. Not every change is an improvement, and not every invention becomes an accepted innovation, but if you don’t keep tinkering with your approach you will definitely fail. It’s only an experiment if it can falsify an hypothesis you had about your business or customer needs.

“For an idea to get big it has to be useful and being useful does not need funding. Start now with a humble prototype of your big vision and you will be in the game.”
Derek Sivers in “Anything You Want“

Forcing your self to start small leads to survivable failures that not only cost less but occur more quickly. You learn faster and refine your vision more rapidly.

“Make every decision–whether to expand the business, raise money, promote someone–according to what’s best for your customers.”
Derek Sivers in “Anything You Want“

This is a core concept for both lean and entrepreneurial thinking: am I adding something to my product or the supporting services that creates more value for my customers? This gets harder as you start to scale or you start to fail. As you scale more of your employees have less front line contact with customers–unless you invest a lot of effort in avoiding this–and have less of a feel for what they value. When you are starting to fail you may have to choose to abandon a product or a line of business to protect your ability to focus on opportunities.

“Design your business to have no big client, just lots of little clients.”
Derek Sivers in “Anything You Want“

This is a hard one to manage because it’s much easier to sell to existing clients, and to get trapped early on by a major client, so that you cannot contemplate their loss and therefore cannot say “no” to them. But the result will be that you have built is a job or a captive consulting shop and not a long term viable business.

“The best plans start simple. A quick glance and common sense should tell you if the numbers will work. You don’t know what people really want until you start doing it.”
Derek Sivers in “Anything You Want“

A simple model with a few key parameters is easy to judge. You will learn more once you are in contact with the market–which is a fancy way of saying you are having conversations with and listening to prospects (and customers)–but if you don’t have a simple model you have not way to integrate what you are learning. It’s also useful to vary a couple of the parameters across what you believe their range is and see where it breaks your model.

“When you’re onto something great, it won’t feel like a revolution. It will feel like uncommon sense.”
Derek Sivers in “Anything You Want“

It’s like discovering a secret that others have not yet figured out or working with the grain of the wood instead of swimming against the current or waiting in sustained silence as your efforts are simply ignored.

“Prepare to double: have a plan for what would happen if the business doubled. ‘More of the same’ is never the answer.”
Derek Sivers in “Anything You Want“

There Are People On The Other End

“You should feel pain when you’re unclear.
Derek Sivers in “Anything You Want” (used as a chapter title)

He contrasts an email that is unclear and generates e-mail responses, phone calls to complain, and new trouble tickets with a web page announcement that is equally unclear but gets ignored. He suggests you try and structure your communication so that when it’s not clear you get complaints or at least requests for clarification not silence. The latter allows you to hatch a much larger catastrophe.

“A real person a lot like you.”
Derek Sivers in “Anything You Want” (used as a chapter title)

It’s easy to forget that there is a real person on the other end of the email or text chat or trouble ticket request.  And your customer can forget that in the same impersonal forms of  communication (e-mail, text message, voice mail, trouble ticket system). Don’t forget the “real person a lot like you” on the other end when you are transmitting or acknowledging and cut them some slack if they forget when complaining to you.

At some level the first part of the book is a portrait of an artist as a young entrepreneur. Sivers’ fundamental goal–as he states repeatedly–was not to become a successful entrepreneur. He wanted to be a singer in a rock and roll band and continued to take vocal lessons and play in bands.  The very first iteration of CD Baby was just designed to sell his own band’s CDs until other musicians asked him for help when learned he had solved the on-line distribution problem for himself.

He details how at various points he had unwittingly given his father 90% of the company for a token amount of money, he had delegated so much authority to his employees that they designed a profit sharing plan that allocated all of the profits to their profit sharing plan, and he didn’t come to company headquarters much in later years.

I don’t think this detracts from his observations about what was required to get CD Baby off the ground and up to a several million dollars a year run rate. Overall this is a book I recommend along with his blog.

5 thoughts on “Anything You Want By Derek Sivers”