Unreasonable entrepreneur is almost redundant. By definition entrepreneurs want to change the status quo, offering better products and services as substitutes for established and successful ones. This often requires an unreasonable amount of effort and persistence, sometimes to the point of stubbornness, in the face of not only opposition but also a concentrated lack of interest. The lukewarm response initially promises adoption until we realize it was the easiest way to get us to shut up. The challenge is not to become stubborn and parochial but to continue appreciate the realities of your prospect’s situation.

He Will Not Listen…Doing His Work In His Own Way

A high school friend forwarded me an article “Sir John Gurdon, Nobel Prize Winner, Too Stupid For Science At School” this and remarked, “this reminds me of some of my report cards.” 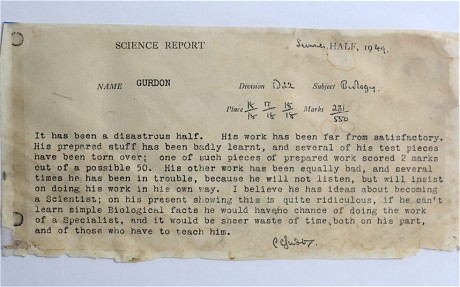 Here is what the typewritten 1949 report card reads for sixteen-year-old John Gurdon:

“It has been a disastrous half. His work has been far from satisfactory. His prepared stuff has been badly learnt, and several of his test pieces have been torn over; one of such pieces of prepared work scored 2 marks out of a possible 50. His other work has been equally bad, and several times he has been in trouble, because he will not listen, but will insist on doing his work in his own way. I believe he has ideas about becoming a Scientist; on his present showing this is quite ridiculous, if he can’t learn simple Biological facts he would have no chance of doing the work of a Specialist, and it would be sheer waste of time, both on his part, and of those who have to teach him.”

For work that Sir John Gurdon did thirteen years after this report card he was awarded the Nobel Prize in Medicine in 2012. From “Sir John B. Gurdon–Facts” on the Nobel Prize website:

In 1962, John Gurdon removed the nucleus of a fertilized egg cell from a frog and replaced it with the nucleus of a mature cell taken from a tadpole’s intestine. This modified egg cell grew into a new frog, proving that the mature cell still contained the genetic information needed to form all types of cells. In 2006, Shinya Yamanaka succeeded in identifying a small number of genes within the genome of mice that proved decisive in this process. When activated, skin cells from mice could be reprogrammed to immature stem cells, which, in turn, can grow into all types of cells within the body. In the long-term, these discoveries may lead to new medical treatments.

And all of us stubborn entrepreneurs rejoice at a persistence of vision vindicated.

Alas, it not so simple as I indicated to my friend:  “The challenge is determining whether you may become outstanding in your field or just left out standing in your field. If all of us who are stubborn were undiscovered geniuses the world would be getting better a lot faster.” He replied, “I know, I am waiting to hear from some kind of prize committee but I get a sense time is running out.”

Focus on Mission and Values: Why Are You Here?

As entrepreneurs the challenge is to pick what you need to persevere and what values or goals you cannot compromise on. Changing the status will always mark you as unreasonable, consider:

David Heinemeier Hansson wrote a personal and thought provoking piece last week called “Reconsider.”  He suggests that any entrepreneur should first ponder the question “Why are you here?” Here are his answers, somewhat counter-cultural for the Silicon Valley venture ecosystem but he would fit right in at a Bootstrapper Breakfast.

Are You Being Stubborn Or Do You Need to Persevere?

When you do your end of year review for 2015 and start planning for 2016 consider:

Unreasonable entrepreneur is a redundancy: entrepreneurs want to replace the proven with the new. Worry instead about being stubborn instead of persevering.

5 thoughts on “The Unreasonable Entrepreneur”