3D printing is overhyped and its implications are not well understood. It will be twenty plus years before there is a 3D printer in most homes due to limitations of the cost of the machine, material, obtaining software and learning how to use the software. Other fundamentally problem that prevent 3D printers being adapted by the public are to understanding of design, physics, and material science and a change of behavior of making things at home.

3D printing is overhyped and its implications are not well understood.

The first area that is significantly overhyped is the trajectory of the effects of 3D printing on modern society. People and media expect 3D printing to transform American society in a matter of five years; however, the effect of 3D printing will be seen on the horizons of five, ten, and twenty years.  Currently hobbyists use 3D printers for developing toys and small collectibles. It is used to create jewelry, kitchen tools like cookie cutters or cups and other small household goods.  According to yeggi and pinshape “Toys and Games” are the best selling categories for 3D printing.  The homes that will embrace 3D printing first will be with the people who want a supply of items that are not made anymore such as old car hobbyists who need car parts that are out of production or people who want to start their own jewelry business or a hobbyist printing out parts for the personal size drone.  There are several reasons that will limitations 3D printing making into every home.

The cost of consumer 3D printers ranges from 300-5,000 dollars plus a spool PLA or ABS plastics cost around 50-80 dollars. This website has a list of arguably the best consumer level printer out there. The consumer grade printers are cheaper than industrial grade printers for several reasons: performance, accuracy, size of printer, throughput, and surface finish.

3D printing main breakthrough in the manufacturing world was its speed in completing and delivering a prototype that was good enough or close enough to the final product so that the customer has a good enough idea of what it will feel and look like. Often people might expect the objects to come out of the printer just as good as if they bought the same object from the store, but the printed object often has imperfections and fail two or three times before printing out completely.  The fantasy of 3D printers being the Star Trek replicators is far becoming a reality.

It is far more likely that 3D printing first home application will be used to make repairs to existing objects, because even though everyone might own a 3D printer does not mean people will make their own things.  To make new things that will have a functioning purpose requires an understanding of design, physics, and material science.  The professional CAD programs are the best for making objects or editing existing objects, but they are cost around three thousand dollars for a single license and requires months of learning. There are also several open source you can download such as TinkerCad, Autodesk 123D, and Google Sketchup, but they have limitations of pre-existing designs of shapes, toys, iPhone cases, and jewelry allowing the user to perform simple adjustments like color change or add lettering. 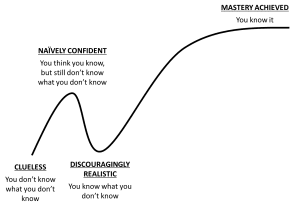 These are just of the few broad problems with consumer 3D printing.  An alternative that is already taking place that presents a fork in the road is instead of people buying a 3D printer and learning CAD software people could go to a hardware store and pay for a printed object.  Staples and Home Depot are the first national stores to get involved in 3D printing technologies.

The other interesting method is going to be done by Amazon.  Their plan is have trucks with 3D printers  to provide mobile manufacturing. 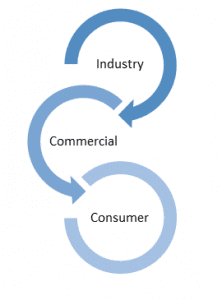 Hardware stores may go undergo great change as the theory of no more inventory stocked up in the store since the store could have a farm of 3D printers to print objects.  This is more likely the future of 3D printing for the next five to ten years where people go into or send files to a store to get items 3D printed instead of doing everything at home.  It will take time to change focus of 3D printing from the industry to the home. It is a big leap to make something successful in industry to make it to the home.  Very few make that jump.  Rather, new products or processes will succeed in the bigger market of businesses and commercial world before tapping into the consumer market.  In regards for 3D printing, hardware stores, auto shops, and hobby stores will be the most likely the first businesses that operate 3D printing services.

Innovation by Combination and Change of Behavior 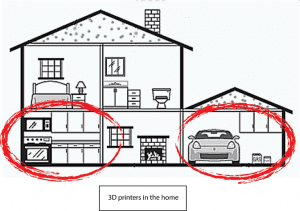 Also every new innovative idea demands some level of change in behavior.  3D printing is projected to soon become the only machine used from start to finish of the creating things; however, only the people in the ‘adopt-or-die’ mindset will do this because the rest of the people don’t really want to change how they have been doing things. It require fathers and grandfathers to include an adjustment to their process of making the objects they need on a printer instead of building things with power tools all in the setting of the garage.  As of right now, the 3D printer is somewhat a standalone machine.  The easiest way for the 3D printer to make it in the home would be to combine with something that already is used. For example, a 3D printer and CNC machine combination is far more appealing and less difficult on the change of the behavior compared to just sticking a 3D printer in the garage.  This disruptive innovation by combination is also found in the modern day office printer. 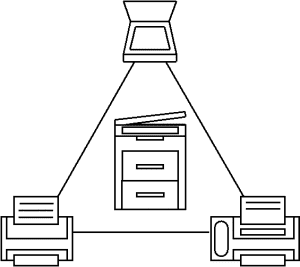 The inkjet printer started out as just a machine that could print and a machine only used in the industry setting. Today, printers have combined the scanner, fax machine, and printer which all shared the same characteristic, flat bed of glass.

3D printers will follow suit; there is already a printer, ZEUS, in the market that has the scanning capability, so more companies will insert a scanner inside the 3D printers to maintain a competitive edge.  There is also a strong chance that the printers with the built-in scanners will have a faxing feature that could scan and send the file right from the machine to another machine or a store.    It took decades for the  integration of industry printers to commercial printers to household printers  and it is also important to note that people still go businesses such as OfficeMax or FedEx to print their important photos, reports, etc. even though they have printers in their homes.  It will be twenty of more years before a large percentage of the American population has 3D printers in their home.  The most likely future of 3D printers will be the combination of the 3D printer with other machines or functions such as scanning, faxing, printing utilities.  There are two other machines that dealt with the same ideas and problems that 3D printers will face with.

The second machine that pertains to 3D printers is the sewing machine. Sewing machines revolutionize the clothing industry; it made the process of sewing clothes faster and more efficient than ever.  With the speed and cost of the sewing machine made it possible for people to make their clothes; however, more sewing machines are found in clothes factories than in the homes. The important idea to note that even though anyone could buy a sewing machine it does not mean that anyone will be making their own clothes.  It seems like the only people not working in the clothing industry that know how to make clothes are grandmothers, but most grandmothers making special clothes through knitting and use sewing machines to make fix old clothes.  It is far more likely that 3D printing first home application will be used to make repairs to existing objects, because even though everyone might own a 3D printer does not mean people will make their own things.  To make new things that will have a functioning purpose requires an understanding of design, physics, and material science.  As stated earlier, it is the same way for 3D printing.  Besides the garage and personal electronics, the kitchen has had successfully implemented machines or tools to change the way food is now prepared.

The espresso machine is one of the few machines that people operate at in the kitchen, in fact, the most likely place that 3D printers will be the kitchen.  The food printer will be the most successful in the home because it doesn’t require heavy use of technology to acquire the final product. 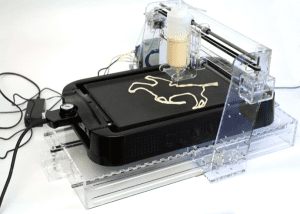 Almost everyone that owns an espresso machine knows how the machine generally works as it will be easier for people to understand how the simple food printer works compared to a plastic 3D printer works. The user may just have to pick a design and print out the favorite chocolate in that sort of arrangement in the same way the espresso machine’s has people choose their coffee and makes it for them.   The purpose is also different with the food printer, which is to make food to be eaten or for an art use. 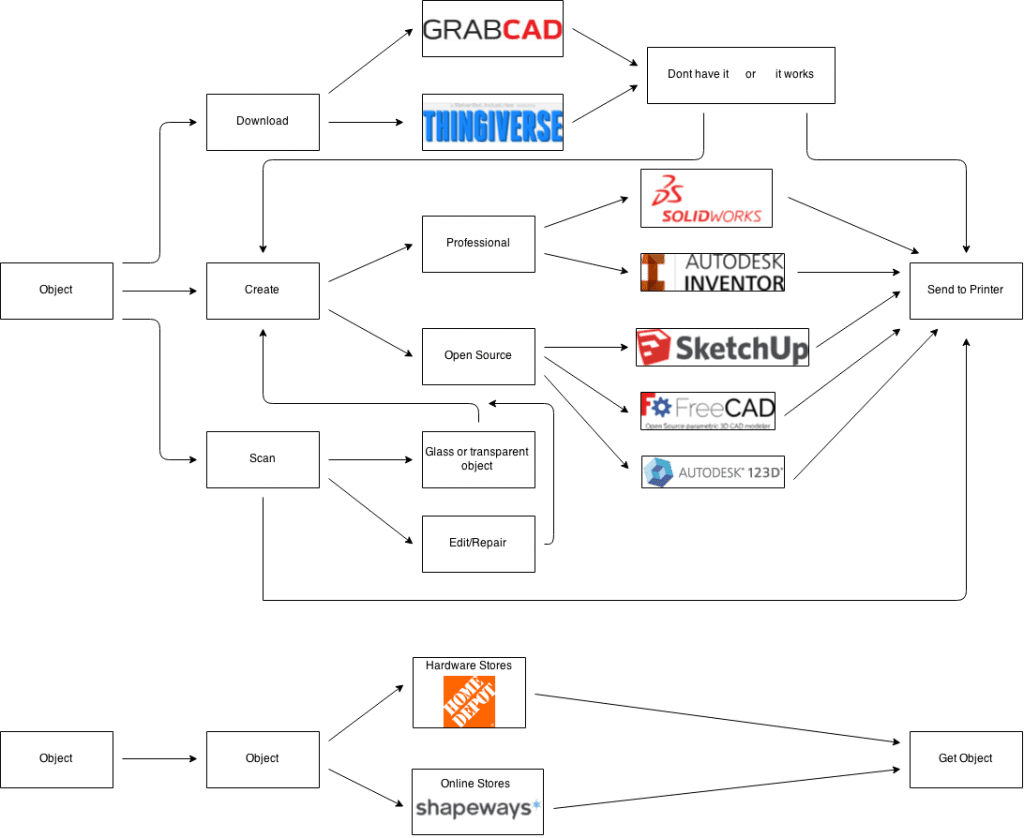 Max Murphy is Mechanical Engineering student in his Junior year at California Baptist University. He is interested in the implications of 3D printing or positive manufacturing for mechanical design. He is currently an intern at Soundfit, one of the companies that is part of the Bay Area Advanced Manufacturing Hub (BAAM), where he is gaining hands on experience with a 3D printer and scanner and an intern at Neodyne Biosciences working with the R&D and Q&A departments.

I received the following in an email from Chris Yonge,

“You correctly (imho) identify one of the problems of mass adoption of 3D printers being the complexity of current 3D software. That which is easy to learn is frustratingly simple; that which supports real creativity is complex. Nobody has yet developed an interface – and it’s all about the interface – which supports complex editing with a rapid learning curve.

I also agree that the most likely place for home 3D printing will be the kitchen. Simple extrusion of sugar paste, potato paste, and pasta flour will be able to create complexly crunchable/chewable sweets, snacks, and pasta. Particularly in the case of the last, the ability to control texture and sauce makeup may produce some fascinating results. In general FDM doesn’t have the strength or finish to be widely acceptable, however.

But it’s a fascinating field, and one that will continue to evolve. No doubt ideas and applications will emerge that couldn’t be imagined today. Most, I suspect, will be in the areas of mass customization and increasing strength/weight in aerospace and automotive components.”

6 thoughts on “3D Printing: The Next Best Thing But Not Yet”