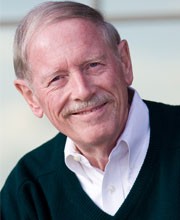 Gary Smith, founder and chief analyst at Gary Smith EDA, passed away July 3, 2015 after a brief illness. He was a good friend and a mentor and he contributed substantially to fostering the collaboration around a shared vision in Electronic Design Automation that is necessary to keep Moore’s Law moving forward.

I learned a lot from him in a friendship that spanned more than  25 years and will miss the chance to compare notes with him on life and business. He lived the life he wanted, was devoted to his wife Lori Kate and his son Casey, and stayed active in a professional community he had nurtured for more than four decades.

I have known Gary Smith for almost 20 years: we met when he was a methodologist at LSI Logic and their salesman for 3Com dragged him in to encourage us to continue using the proprietary LSI tools and not move to Synopsys Design Compiler and Verilog for ASIC design. Like all good ENTJ‘s he was hearty, robust, and argumentative. I guess it takes one to know one. What Gary and I considered to be a friendly but spirited conversation the salesman was convinced had escalated to a shouting match. We have been friends ever since.

We continued to have lunch or coffee a couple of times a year. I visited him the Good Samaritan ICU when he was hospitalized in late 2013 with a bad infection and again at home a few weeks after he got out. He had a long tether of plastic tubing that allowed him to walk around his house and get oxygen, I felt like a fish in aquarium being visited by a deep sea diver. He was very cheerful and took his son Casey out for a walk (he had a small portable oxygen tank he could use to leave the house).

When he came back he lay down on the couch for nap and he was so still I had this sense he was lying in a coffin and that this might be the last time I would see him. But we met for lunch perhaps two months later in early 2014 and he drove himself and did not bring his own oxygen: he was thinner but full of energy and good humor and it was like nothing had ever happened aside from some weight loss.

There were several things I learned from his example and his insights:

There is a memorial service scheduled for Sunday July 12 at 11am at the DoubleTree San Jose (2050 Gateway Place, San Jose, California, 95110). To provide a loving memorial for Casey and Gary’s granddaughters, Rachel and Shannon, Lori Kate and the family kindly request that you share your favorite stories and/or pictures to memory@garysmitheda.com.

A Gary Smith Memorial Scholarship has been established at San Jose State University.

Other Obituaries for Gary Smith