Kenopsia is a neologism coined by John Koenig for “the eerie, forlorn atmosphere of a place that’s usually bustling with people but is now abandoned and quiet” like the “bare ruined choirs” of Shakespeare’s Sonnet 73. What follows is one of my “Spiritual Sundays” posts. It’s a meditation on loss and impermanence.

“kenopsia
ETYMOLOGY From Greek, kenosis “emptiness” + opsia “seeing”
n. the eerie, forlorn atmosphere of a place that’s usually bustling with people but is now abandoned and quiet—a school hallway in the evening, an unlit office on a weekend, vacant fairgrounds—an emotional afterimage that makes it seem not just empty but hyper-empty, with a total population in the negative, who are so conspicuously absent they glow like neon signs.”
From the “Dictionary of Obscure Sorrows“

I worry that as much as technology is connecting us on-line in our new always-on lifestyles it’s also leaving us increasingly alone even when we are together. I am not sure why it’s more troubling to see a group of people all reading their smartphones than to see them all reading newspapers or magazines. Perhaps my concern is misplaced or I need to do more to parse the differences between reading print, reading on-line, watching  video, and playing a video game.

“That time of year thou mayst in me behold
When yellow leaves, or none, or few, do hang
Upon those boughs which shake against the cold,
Bare ruined choirs, where late the sweet birds sang.”
opening lines to Shakespeare’s Sonnet 73

I notice more and more in public spaces that couples are each looking into their own tablet or smartphone, that every child seems to be watching their own screen in a family group. Monkey-see monkey do I feel the tug to pull out my own smartphone and start reading something, and act that feels much more profoundly anti-social for some reason than if I were to bring a book and read it.

We may be at a point where screens are going to start dissolving into more intelligent and reactive environments and perhaps we will all be wearing augmented reality glasses–this generation’s answer to cyberpunk’s mirror shades– so that we are now looking at reality through a screen.

I found this video by John Koenig very moving.

“You can sense it when you move out of a house,
noticing just how empty a place can feel.
Walking through a school hallway in the evening,
or an unlit office on a weekend,
fairgrounds out of season.
It’s usually bustling with life,
but now lies abandoned and quiet.”
Kenopsia transcript by John Koenig

We lost our Internet connectivity for about 24 hours a few weeks ago. It was a strange and very unsettling feeling. I felt like when I was 6 years old and our television broke and I knew that there were cartoons and other good shows (Fireball XL-5, Romper Room, Captain Kangaroo) that I was missing but even though I would go over to the TV periodically and turn it on again nothing would happen. I felt like I was in one of those science fiction movies where civilization has fallen back into a new Dark Ages. Strangely very depressing.

Long Since Moved On

“It’s easy to forget that most of your memories happened in places that are still around,
the walls mostly unchanged,
with even some of the same people,
who carry on in your absence.
But the world you once knew,
and the people you still remember,
have long since moved on,
replaced by so many others who have passed through these doors.”
Kenopsia transcript by John Koenig

Churchill observed that “we shape our buildings, and afterwards our buildings shape us.”  I think our on-line collaboration spaces–forums, email lists, wikis, shared documents, shared folders–affect us in similar ways. The choice of platform fosters certain behavior in a community even as the members change.

Walk Through the House One Last Time

You try to stick around long enough to catch up with the memories,
to finally linger in the life you spend so much time building up,
hoping the world will stick around to keep you company.
But eventually you’ll pack up your things
and walk through the house one last time.
Kenopsia transcript by John Koenig

I remember getting off on the wrong floor of a building early one Saturday morning looking for a meeting, wandering through an office door that had been left unlocked and not realizing for several minutes I was in the wrong place. It’s similar to visiting a forum that has been inactive or reading an email archive where new contributions have become increasingly rare.

A Blank Canvas They’ll Fill Up With Their Own Memories

And not a day after you leave, it’ll become someone else’s new home,
a blank canvas they’ll fill up with their own memories.
burying the life you built in a fresh coat of paint,
leaving nothing but echoes of what was once here.
Kenopsia transcript by John Koenig 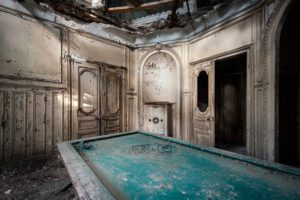 A long time ago I registered the domains l-m.com and e2w3.com (using them for Leader-Murphy, Inc. and “Electrical Engineering on the World Wide Web” the latter a distant also ran to Yahoo that started out as a directory of engineering sites). My use predates archive.org and I have long since lost my backups but at least l-m.com remains in active use by others .

I grew up in house that had been built in the early 1900’s, I can remember when I was perhaps 8 an old man knocked on the door one Saturday morning and said that he had been born in the house and asked if he could walk through for a few minutes. By then my father had extensively remodeled it and except for parts of the basement the old man said he really didn’t recognize where he had grown up.

Not Just Empty But Hyper-Empty

Leaving the room not just empty but hyper-empty.
with a total population in the negative,
whose inhabitants are so conspicuously absent they glow like neon signs.
Kenopsia transcript by John Koenig

I remember arriving very early for a Silicon Valley Code Camp at Foothill College a few years ago and sitting in the classroom where the first talk I wanted to attend–the first talk of the day in that classroom–was going to take place in about an hour. It was far enough from the highway that all I could hear was some birdsong. It seemed pregnant with the potential arrival of the rest of the audience but it was a strange feeling, akin to “traveling hopefully.”

My first two jobs occupied the same office space about 9 months apart. I worked in one office at the corner of Page Mill and Foothill Expressway, I moved to a different company in the same campus, the first company moved out a few months later and my new company kept their old space and added the office I had worked in to support additional staff. It was strange to be sitting in the same large room that a year earlier had been divided up into cubicles and was now just a few desks scattered around. The break room at the first company had been well stocked but the new firm just paid for coffee. The energy level was higher in the new firm and the people dressed more informally. The first few days in the new office were a little like a Twilight Zone episode where I would come into the lobby and reception area that were unchanged but once inside it was an entirely different setup.

Memories So Powerful They Mark the Wall

Maybe that’s why we want to believe in ghosts.
Maybe it’s just a fantasy.
A fantasy that our memories are so powerful they’ll leave a mark on the wall
that would mean something to someone else,
and can’t just be painted over.
Kenopsia transcript by John Koenig

Smells and tastes can summon the past, music certainly can. I think our on-line community spaces are paradoxically more sterile and resistant to lingering memories  and at the same time like flypaper. I am now connected to at least half a dozen LinkedIn profiles of deceased friends and former co-workers.

We just want to mark our time here,
to keep the rooms filled and the memories alive.
And if our houses are haunted,
it’ll be because we’re haunting them ourselves,
as if there was ever such a thing as unfinished business.
Kenopsia transcript by John Koenig

We had a first time attendee at the Bootstrapper Breakfast a few months back share an epiphany that the average lifetime is about 4,000 weeks. For some reason picking that unit offers a different perspective than decades or years (or days or seconds for that matter).  By that reckoning I have less than 1,000 weeks left–although I suspect a more realistic approach would be to recognize that I am more or less already in “sudden death overtime”–which is clearly not enough time to finish all of projects I have planned. Fortunately I have drafted my obituary.

By the Waters of Babylon

The video reminded me of Stephen Vincent Benet’s mesmerizing short story “By The Waters of Babylon” that details a young man’s journey to a ruined New York City, known to his people as “The Place of the Gods” (and the title of the story when originally published in the Saturday Evening Post in 1937). I had read it as a boy and was moved again when I re-read this scene while I was drafting this post.

It’s  a fitting coda to a meditation on loss.

“He was sitting in his chair, by the window, in a room I had not entered before and, for the first moment, I thought that he was alive. Then I saw the skin on the back of his hand–it was like dry leather. The room was shut, hot and dry–no doubt that had kept him as he was. At first I was afraid to approach him–then the fear left me. He was sitting looking out over the city–he was dressed in the clothes of the gods. His age was neither young nor old–I could not tell his age. But there was wisdom in his face and great sadness. You could see that he would have not run away. He had sat at his window, watching his city die–then he himself had died. But it is better to lose one’s life than one’s spirit–and you could see from the face that his spirit had not been lost. I knew, that, if I touched him, he would fall into dust–and yet, there was something unconquered in the face.”
“By The Waters of Babylon” by Stephen Vincent Benet

Links for Dictionary of Obscure Sorrows