Excerpts from Kurt Vonnegut’s commencement speech at Agnes Scott College, May 5, 1999. He suggests we replace the Code of Hammurabi with forgiveness.

Kurt Vonnegut: Replace the Code of Hammurabi with the Sermon on the Mount 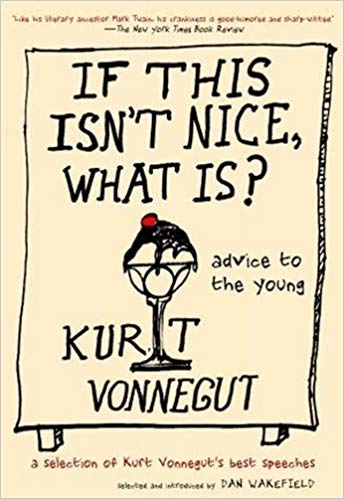 Some excerpts from Kurt Vonnegut‘s commencement speech at Agnes Scott College, Decatur, Georgia, May 5, 1999 as recounted in “If this isn’t nice, what is?”  He offers a critical insight for business as well as life.

Everybody asks during and after our wars, and the continuing terrorist attacks all over the globe, “What’s gone wrong?”

What has gone wrong is that too many people, including high school kids and heads of state, are obeying the Code of Hammurabi, a King of Babylonia who lived nearly four thousand years ago. And you can find his code echoed in the Old Testament, too. Are you ready for this?

“An eye for an eye and a tooth for a tooth.”

A categorical imperative for all who live in obedience to the Code of Hammurabi, which includes heroes of every cowboy show or gangster show you ever saw is this: every injury, real or imagined, shall be avenged. Somebody’s going to be really sorry.

When Jesus Christ was nailed to a cross, he said, “Forgive them, Father, they know not what they do.” Any real man, obeying the Code of Hammurabi, would have said, “Kill them, Dad, and all of their friends and relatives, and make their deaths slow and painful.”

His greatest legacy to us, in my humble opinion, consists of only twelve words. They are the antidote to the Code of Hammurabi.

“Forgive us our trespasses as we forgive those who trespass against us.”

The full video of Vonnegut’s Anges Scott College commencement is available on CSPAN.  I learned of Vonnegut’s speech from Maria Popova’s “If This Isn’t Nice, What Is? Kurt Vonnegut’s Advice to the Young on Kindness, Computers, Community, and the Power of Great Teachers” but she doesn’t include the “twelve words” in her summary.

“An eye for an eye and soon the entire world is blind.”
Gandhi [attributed]

The Hammurabic Code, along with its presumptive predecessors, represented something radical and new in human history. With the law written down — with the law fixed — a man who had committed no transgression no longer had reason to tremble before princes and potentates. If the driver of oxen had been paid his statutory wage, if a man’s contractual obligations had been satisfied, and if his life was unsullied by violations of the law, handily carved upon slabs of igneous rock for all to see and ingest, then that man was, within the limits of his law, free.
Kevin Williamson “Hammurabi’s code“

3 thoughts on “Kurt Vonnegut: Replace the Code of Hammurabi with the Sermon on the Mount”