“The Fish and the Bait” is a 1921 Safed the Sage story by William Eleazar Barton originally publish in April 14, 1921 in the Advance.

The Fish and the Bait 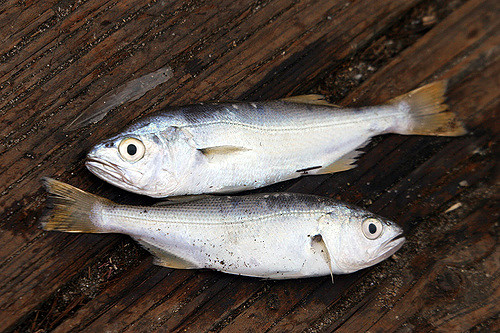 There were in a certain city two boys. And they both loved to fish. And there came a day when the Spring was alluring, and they listened unto the Call of the Wild. And they went out of the city, and sat them down by a Certain Stream. And they essayed to fish.

But one of those boys before he went, took a Tomato Can and an Hoe, and went into the Back Yard, and dug until he had a Dozen Worms and a Blister. But the other boy liked to fish and did not like to Dig Worms.

And it came to pass at the end of the day, that they returned home the both of them. But one of them had a string of fish and a Sunburnt Nose, and the other had only a Sunburnt Nose.

And it came to pass that those two boys grew into Manhood. And one of them before he began any New Enterprise, went into the Back Yard of the matter, and did a lot of hard digging. And the other just shouldered his pole and went into the affair, and watched his Cork placidly floating upon the Surface of the Stream, and never going under. And the history of one of these men was a Succession of Successes, and the other was a Series of Sheriff’s Sales.

And when I considered these matters, I said, Life is a Fish Pond, but it is more than that. It is also a Back Yard out of which Worms are to be dug with much Arduous Toil; and other things being equal, one’s String of Fish proportioned unto the Size of his Tin Can of Bait, and the number of blisters in his hands that were made by the Hoe Handle.

For while the Hoe Handle is less pleasant to the hand than the Fishing Pole, it is an Important Element in the catching of Fish.

Improvisation vs. Preparation In Demos and Interviews

“A month in the laboratory can often save an hour in the library.”
Frank H. Westheimer

Before a demo or customer interview do your homework: don’t ask a question that basic research on a prospects’s website, LinkedIn profile, blog, or Googling can uncover.  Asking a basic question shows you have not done your homework.

Identify two or three key questions you hope to get answers to and allow yourself to have a conversation. If the prospect does not much curiosity about your team and your product, if they are not asking a lot of questions , then thank them for their time and wrap it up. If they are engaged then you can stay engaged.

Garth Rosella and Stan Flewelling collected 80 of William Eleazar Barton’s stories in “Parables of a Country Parson” (a reprint of their earlier “Millionaire and the Scrub Lady“). Paul Spite has republished all five books, see “Archeologos Press: The Parables of the Safed the Sage Series“

1 thought on “William Eleazar Barton: The Fish and the Bait”