Daniel Levitin’s “This is Your Brain on Music” offers an interesting mix of insights based on research, interviews with musicians, and his own experience. 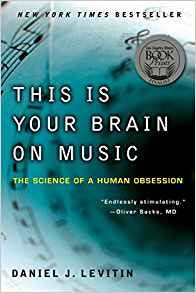 This is Your Brain on Music

Daniel Levitin’s “This is Your Brain on Music” is an interesting exploration of how we  process and appreciate music. Music has always been a big part of my life and I found it a very thought provoking if somewhat idiosyncratic exploration of the effect of music on the brain. Levitin offers insights based on cognitive research, interviews with musicians and other artists, and his own experiences. What follows are three excerpts from the book and a video of a talk he gave at Microsoft Research which offers a simplified and less discursive narrative than the book does. Both are recommended.

Music Unfolds and Your Brain Tries to Anticipate

“As the music unfolds, the brain constantly updates its estimates of when new beats will occur, and takes satisfaction in matching a mental beat with a real-in-the-world one, and takes delight when a skillful musician violates that expectation in an interesting way–a sort of musical joke we are all in on. Music breathes, speeds up, and slows down just as the real world does, and our cerebellum finds pleasure in adjusting itself to stay synchronized.”
Daniel Levitin in “This is Your Brain on Music“

It often takes me two or three times to listen to a song to determine if I actually like it. Conversation has some of the same properties: it can take a while to understand another person’s perspective and to usefully anticipate key aspects of what they may say. Conversation can offer new perspectives that enlarge our understanding. I think music offers a form of meditation that enables “lateral drift” and can unlock creativity.

“One thing a person cannot do, no matter how rigorous his analysis or heroic his imagination, is to draw up a list of things that would never occur to him”
Thomas Schelling

Successful People Have Had Many More Failures On Average

Whether it’s successfully developing and launching a new product or writing a book or composing a piece of music you have to discard many more ideas and improvements than you incorporate.  Destructive actions can have an immediate and long term effect but  improvement efforts and attempts to craft novel and useful solutions often have no effect or only negative consequences. The challenge is persevering through a sequence of many small changes that individually can be reversed or at least easily mitigated. Easy to say, hard to do.

“Law of twins: most of the time, for most of the world, no matter how hard people work at it, nothing of any significance happens. For most systems, prediction of tomorrow is same as today.

Pandora’s Pox: Nothing new ever works but there’s always hope that this time will be different.

Ford’s Fundamental Feedback Formula: people can do anything they want as long as they personally have to live with the consequences.”

Gerald Weinberg in “Secrets of Consulting”

“Artist’s studios and scientists’ laboratories share similarities as well, with a large number of projects going at once, in various stages of incompletion. Both require specialized tools, and the results are–unlike the final plans for a suspension bridge, or the tallying of money in a bank account at the end of the business day–open to interpretation. What artists and scientists have in common is the ability to live in an open-ended state of interpretation and reinterpretation of the products of their work. The work of artists and scientists is ultimately the pursuit of truth, but members of both camps understand that truth is in its very nature is contextual and changeable, dependent on point of view, and that today’s truths become tomorrow’s disproven hypotheses or forgotten objects d’art.”
Daniel Levitin in “This is Your Brain on Music“

I like this comparison between art and science. Both involve exploration and trial and error.

from a 2011 talk at Microsoft Research https://www.youtube.com/watch?v=fV8EOwgEDzk

My three key take-aways from this talk:

If you enjoy listening to music Levitin’s book offers a rich set of perspectives on what’s involved and why.