Quotes For Entrepreneurs Collected in November 2018 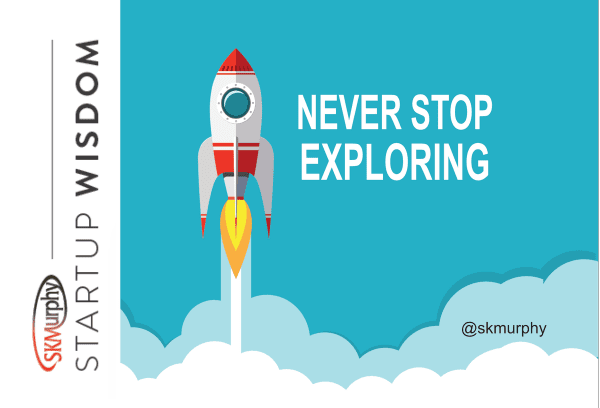 “It is in our nature to explore, to reach out into the unknown.
The only true failure would be not to explore at all.”
Ernest Shackleton

“Integrity is so perishable in the summer months of success.”
Vanessa Redgrave

“Every great cause begins as a movement, becomes a business, and eventually degenerates into a racket.”
Eric Hoffer

A bias for action is a hallmark of entrepreneurship.

This reminds me of Pasteur’s observation:

“In the fields of observation chance favors only those minds which are prepared.”
Louis Pasteur inaugural lecture as professor and dean of the faculty of science, University of Lille, Douai, France, December 7, 1854.

“Expected the unexpected or you won’t find it”
Heraclitus

“To give life a meaning, one must have a purpose larger than one’s self.”
Will Durant

“The most important single central fact about a free market is that no exchange takes place unless both parties benefit.”
Milton Friedman

The core premise of entrepreneurship is the free exchange of value: quid pro quo. I blogged about this in “Zero Sum vs. Quid Pro Quo.”

“Those who mistake their good luck for merit are inevitably bound for disaster.”
J. Christopher Herold in “Bonaparte In Egypt“

“A contract is a set of instructions that act as a blueprint and specifications for a business relationship or transaction. A contract is only as good as the parties that sign it.”
Peter Siviglia

“Never assume that the other guy will never do something you would never do.”
Donald Rumsfeld in “Rumsfeld’s Rules“

“Five British military aphorisms I have relied on all of my life:

Fr. Timothy Horner, OSB in “Learning all the time“

“Some of the most dangerous people are those who do not know what they do not know.”
Peter Siviglia

To the extent that they don’t adjust the levels of their confidence by the limits of their certain knowledge.  This is a good one to check in the mirror for as well.

“Hold on to that sense of confusion. It is a precious thing.”
sark (Susan Ariel Rainbow Kennedy)

“Your disbelief in the possible does not make it impossible.”
Laurence Musgrove

“Every cup of tea is an opportunity for a fresh, new start.”
John Haprian (@fshapps)

I have blogged about the value of reflection in “Record to Remember, Pause to Reflect” and “Planning and Reflection.”

“Get someone else to blow your horn and the sound will go twice as far.”
Will Rogers

“Have done, can do” is the most effective promise you can make, especially when substantiated by third parties.

“Send in the complaints. These are our schoolbooks from which we learn what is needed and how to remedy the difficulty.”
James Patterson

Spaceships are now older than airplanes were when we flew our first spaceships. Manned spaceflight beyond Earth’s orbit is at risk of becoming a lost art, or at least a road no longer taken. I explored this in Lost Arts and Roads No Longer Taken, at this point the three men alive of the twelve who have walked on the Moon are in their 80’s.

“The engineer and his associates, in searching for the basic needs, must not project their own needs into the picture. It is an easy trap to imagine the interests of other people as coincident with your own. To analyze the need for a proposed project or product:

“My dyslexia made me spend so much time when I was young trying incredibly hard to pick up reading–this seemingly impossible thing that comes naturally to everyone else–that eventually I built up a resiliency to not being very good at anything in particular. I became pretty comfortable just trying many many different things as creatively as I could, because there is a zero percent chance I’ll become “good at them” anyway. The upside of this is an inherent curiosity.”
John Edgar ceo – stae.co.

“Every day when I write, I feel I’m getting to the main business of my soul.”
William Stafford

“Next to listening to someone describe a play there ain’t nothing as tiresome as waiting for a parade.”
Kin Hubbard in “Abe Martin’s Primer (1914)”

Even if it’s just waiting for the Thanksgiving Day Parade to start on a YouTube channel.

“The purpose of life is not to be happy at all. It is to be useful, to be honorable. It is to be compassionate. It is to matter, to have it make some difference that you lived.”
Leo Rosten

I used this in “Success for a Bootstrapper” and “Learning from John Perry Barlow’s Principles of Adult Behavior.”

“The impeccably credentialed are always loyal to the reigning order.”
Aaron Haspel  in “Everything“

“Ideas are easy to come by; reduction to practice is an arduous but inspirationally rewarding matter.

“I have discovered that one of the important characteristics of most economic trends is that they are too slow in their motion to be visible to humans. We cannot see the motion of the stars, the atoms, a whirling airplane propeller, the growth of a tree, or the hour or minute hand of a clock. In the latter case we can see only the movement of the second hand. Humans do not get out of the way of that which they cannot see moving. As with the electromagnetic spectrum, most of the frequencies and motions of Universe are ultra or infra to man’s sensory range.”
Buckminster Fuller in “Critical Path” [Archive.org]

“The lure of the distant and the difficult is deceptive. The great opportunity is where you are.”
John Burroughs “The Divine Soil“

The lesson which life repeats and constantly enforces is, “Look under foot.” You are always nearer the divine and the true sources of your power than you think. The lure of the distant and the difficult is deceptive. The great opportunity is where you are. Do not despise your own place and hour. Every place is under the stars, every place is the center of the world. Stand in your own dooryard and you have eight thousand miles of solid ground beneath you, and all the sidereal splendors overhead.

“Today’s review of yesterday will be on tomorrow’s test.”
Laurence Musgrove

Unfortunately a lack of retrospection does not mean yesterday’s problems won’t recur if you don’t address or learn from them. Effective teams build after action reviews into their process to reduce mistake and improve results.

What’s often missing is listening with empathy and an open mind–appreciative inquiry–walking around needs and exploring trade-offs. Many IT folks “talk at” or “dictate” to users, few listen.

“Happiness is not simply the absence of despair. It is an affirmative state in which our lives have both meaning and pleasure. […]
The three components of happiness are something to do, someone to love, and something to look forward to.”
Gordon Livingston in Chapter 2 “We Are What We Do” of Too Soon Old, Too Late Smart (2004)

I used “the three components of happiness …” in “Learning from John Perry Barlow’s Principles of Adult Behavior.”