I want to commemorate the 18th anniversary of 9-11 by focusing on people who stayed at their post or rushed in to help. I was inspired by the closing lines of Leonard Cohen’s “On That Day,” a song I heard yesterday for the first time. 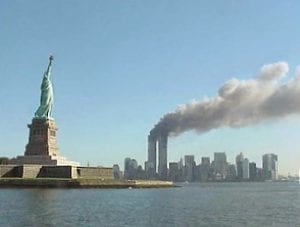 Leonard Cohen “On That Day”

I find this a positive perspective and interpret the “did you report” to mean did you volunteer in some way to help out.  It’s easy to be strong and generous when things are going well, and the wind is at your back. I want to recognize some of those who were able to be both steadfast and creative problem solvers when events had gone sideways into unprecedented disaster on that day.

“People are like stained-glass windows. They sparkle and shine when the sun is out, but when the darkness sets in, their true beauty is revealed only if there is a light from within.”
Elisabeth Kubler-Ross

Rick Rescorla: Horatius at the bridge.

Rick Rescorla was a decorated combat veteran  who took a job in security at Morgan Stanley. He was worried about the risk of attack to the World Trade Center before the first bombing in 1993.

“Susan [Rescorla’s wife] learned that at some point he had used his cell phone to report that all Morgan Stanley employees were out of the building. But one of the last to leave, Bob Sloss, told her that, just ten minutes before the building collapsed, he had seen Rescorla on the tenth floor. When Sloss reached him, he told Rescorla to get out himself. “I will as soon as I make sure everyone else is out,” Rescorla replied. Then he began climbing back up into the building. […]

“What’s really difficult for me is that I know he had a choice,” Susan says. “He chose to go back in there. I know he would never have left until everyone was safe, until his mission was accomplished. That was his nature. That was the man I loved. So I can understand why he went back. What I can’t understand is why I was left behind.”

Dan Hill says that Susan will understand someday, as he does. “What she doesn’t understand is that she knew him for four or five years. She knew a sixty-two-year-old man with cancer. I knew him as a hundred-and-eighty-pound, six-foot-one piece of human machinery that would not quit, that did not know defeat, that would not back off one inch. In the middle of the greatest battle of Vietnam, he was singing to the troops, saying we’re going to rip them a new asshole, when everyone else was worrying about dying. If he had come out of that building and someone died who he hadn’t tried to save, he would have had to commit suicide.”

Rescorla’s desire to be used up for a vital life-saving purpose reminds me of the 300 Spartans–selected both for valor and the fact that they already had sons–and the older men who volunteered to help out at the Fukushima reactor containment breach. It echoes Macaulay’s lines about Horatius at the bridge:

Then out spake brave Horatius,
The Captain of the gate:
“To every man upon this earth
Death comes soon or late.
And how can man die better
Than facing fearful odds
For the ashes of his fathers
And the temples of his gods.
Thomas Babington, Lord Macauley “Horatius at the Bridge”

Anybody who survives the impact, we’ll go to an alternate center, and we’ll continue.

Lewis “Scooter” Libby, chief of staff to Vice President Dick Cheney: We learn that a plane is five miles out and has dropped below 500 feet and can’t be found; it’s missing. You look at your watch and think, Hmmm, five miles out, 500 miles an hour. Tick, tick, tick.

Dick Cheney: My Secret Service agent said, “Sir, we have to leave now.” He grabbed me and propelled me out of my office, down the hall and into the underground shelter in the White House.

Mary Matalin: My jaw dropped and the jaws of my colleagues dropped because we had never seen anything like that.

Condoleezza Rice: The Secret Service came in and they said, “You have got to go to the bunker.” I remember being driven along, almost propelled along. We had no idea where it was safe and where it wasn’t. We didn’t think the bunker of the White House was safe at that point.

Dick Cheney: They practice this—you move, whether you want to be moved or not, you’re going.

Gary Walters: The Secret Service officers started yelling, “Get out, get out, everybody get out of the White House grounds.” I remember early on, the chaos. People running, screaming. Fear was in my mind.

Christine Limerick, housekeeper, White House: The look on the faces of the Secret Service agents who were told that they had to stay—I will never forget that because we had at least the opportunity to flee.

Ian Rifield, special agent, U.S. Secret Service: We were fairly confident that plane was going to hit us. The supervisor in the [Secret Service’s] Joint Operations Center basically said, “Anybody who survives the impact, we’ll go to an alternate center, and we’ll continue.” It wasn’t a joke.

Garrett M. Graff (@vermontgmg) “The Only Plane in the Sky: An Oral History of 9/11

I re-watched Jules and Gedeon Naudet‘s documentary “9/11” (available on YouTube and embedded above) and encourage you to do the same. They were filming a documentary about the training of a new “probie” (probationary firefighter) at the firehouse closest to the World Trade Center. They ended up with live footage of the attack and it’s aftermath as it unfolded. It’s hard to reconstruct my feelings from on that day. But three things struck me watching again after 18 years:

I am sure there are more lessons than this we can still gain from 9-11 and all of the events that transpired on that day and the days that followed.