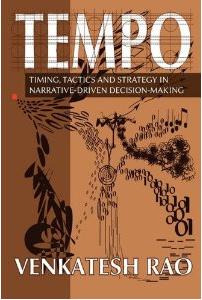 We had Venkatesh Rao, author of “Tempo“, and blogger at RibbonFarm as  guest at today’s Bootstrapper Breakfast.

He has had an eclectic career: between 1997 and 2011, he pursued a traditional research/entrepreneurial career (a PhD, a postdoc, a startup, and an industrial R&D lab where among other things, he founded trailmeme.com as Entrenrepeur-in-Residence at Xerox).

He gave  a shorter and more interactive version of his recent SoCAL Lean Meetup Talk.

He made an interesting point about the OODA Loop that I hope he will elaborate on in the Book Club panel next week. Disruption is related to the concept of operating inside an opponents tempo. It’s not about moving faster or iterating faster. He used an analogy Mr. Miyagi from the Karate Kid movie, one of his moves was as powerful as 10 of Daniel’s moves, because he took the right action at the right time.