Alexander Jablokov‘s first novel, “Carve the Sky,” has a number of elegantly phrased observations and insights. It’s science fiction, set about four centuries hence in a world where humanity has survived a nuclear war and expanded into the Solar System at least as far as the Asteroid Belt. Here are six excerpts that I found memorable. 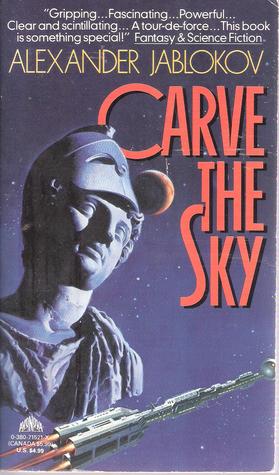 Six Excerpts From “Carve the Sky”

Alexander Jablokow is a freelance content marketing consultant (StudyWords.com) who writes under the pen name of Alexander Jablokov. His “About Me” at SturdyWords explains: “My pen name as a fiction writer is Alexander Jablokov. No good explanation for why I changed only one letter from my legal name, and it’s been a pain ever since. If I was doing it now, I’d just invent a pen name and go with that.” In a blog post entitled “The Artist and the Real Day Job” he was candid about bootstrapping his writing career:

“I earn very little from my writing. […]

For a long time I was–I wouldn’t say resentful of the need for a day job–but certainly not delighted by it. I figured that real artists, if they did have a day job, got one that indicated their denial of its necessity. They worked in a bookstore, or did fill-in design work, or something like that. They lived like graduate students and didn’t give in. […]

Here’s what I can tell you: it can be done. You can work a real grownup day job with responsibilities […] and not enough time off. And you can feel the passionate joy of creation. I won’t pretend it’s easy. The occasional bout of despair is inescapable.

I just wanted to let you know you are not alone.”

Alexander Jablokov in “The Artist and the Real Day Job“

Bootstrapping entrepreneurs face this all the time. It’s called the work/work balance and managing it (along with work/life balance) allows you to have a family and pursue your dreams. But I think his day job explains the pragmatic observations on real life that run through Jablokov’s science fiction.

“A group of men had come into the Great Hall and were gathered around Clavius. they looked like a corporate body of some sort, a board of aldermen, perhaps, or the chiefs of the local board of medical ethics, for they all dressed similarly, in loose dark jackets with wide lapels and trousers with soft boots to mid-calf, and they moved in reference to each other, not simultaneously like a school of fish, but with the symbiosis of effort shown by beavers or wolves. Sober, punctilious men and women, they were anxious to get about their business, and seemed unamused by the disorder of the Clavius menage, though they were obviously used to it.”
Alexander Jablokov in “Carve the Sky“

We had a number of aquariums growing up and I was always fascinated by the how a school of fish coordinated their quick darting patrol of a volume of water. I later wrote a tag line, one of many based on variations on “details as they unfold…” that read: “Details as they frolic in plain view but beyond understanding, like the invisible ineffable cues that a school of fish use to synchronize their movements.” Here Jablokov hints at different movements towards a common purpose like fingers of a hand grabbing a tool or a handhold.

Information Given Away by Questions

“Anton thought about asking Ozaki, but decided against it. One should always be concerned about the information given away by one’s own questions. A searchlight reveals the searcher’s own location first of all.”
Alexander Jablokov in “Carve the Sky“

Always worth bearing in mind in any negotiation that any question can disclose weakness and strategic intent.

“My ancestors, overcrowded and away from nature, invented the rock garden to represent nature in microcosm. An ocean filled with islands, a range of mountains, a vast river: all could be represented by an arrangement of rocks in a tiny area. One could look at them, meditating, and see in their pattern and texture the larger world from which they came.”
Alexander Jablokov in “Carve the Sky“

Seeing this larger pattern or a system seems to rhyme with his earlier observation of the symbiotic actions of a group.

Dignity Is Not Acquired In Isolation, But Interacting With Others

“A gargantuan head with malevolent yellow eyes appeared. The face was that of an elderly Asian man, a wispy beard clinging to the chin, skin pulled tightly over the substructure of bone. Every feature was revealed with the clarity of genius, a masterpiece of the stone carver’s art. The eyes stared into the cabin with the petulant anger of a god disturbed in the middle of creating a universe.

Having finally seen the all-too-human, vacillating, and easily bullied Ozaki, Anton could see that this unsmiling, eternal image was Ozaki’s desire for himself. He was further from achieving it than he had ever been, since stern dignity and dominion over others are acquired not in isolation, but by interacting with other human beings.”
Alexander Jablokov in “Carve the Sky“

This reminded me of two quotes:

“He was a collector of finished works, and did not truly understand the nature of the artist’s task, the will that brought forth a work of art where none had been before. For the first time, his mind leaped ahead from the materials to the finished work, and he had at least an inkling of creation.”
Alexander Jablokov in “Carve the Sky“

I see this gap working in both directions between sales people and engineers. The former understand how to influence people’s decisions, the latter how to make matter and technology do something useful.

Spent the Day In His Pajamas

“He climbed carefully out of his bed over his ramparts of paper. Despite having worked hard the entire day, he had the suddenly worthless and decayed feeling that comes from having spent the entire day in his pajamas.”
Alexander Jablokov in “Carve the Sky“

Some mornings start with a call at 5:30am or 6 and I roll out of bed put on sweatpants and get started. Later I find I have been on Skype or Zoom or the phone and it’s now 1 or 2pm and the first meal of the day is now technically lunch and I am in the kitchen in my sweatpants and I need a shower and I don’t know that I feel exactly worthless but that I skipped a few steps that I now need to make up.

“Carve the Sky” Is Well Crafted and Thought Provoking

This novel takes place in the same universe (in particular referencing ngomite and an Acherusian or Elder Race) as Jablokov’s “Breath of Suspension” short story and references characters and events from it. Both are well crafted and make for thought provoking reading.

3 thoughts on “Six Excerpts From “Carve the Sky””