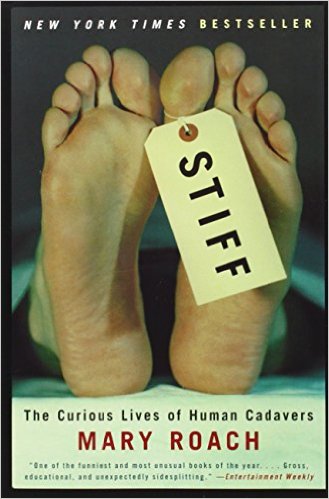 Mary Roach’s Stiff offers a tour of the afterlife: she answers the question what happens to our bodies after we die. She explores funeral homes, autopsies, medical training, medical research, crash testing, body armor testing, cremation, brain death, natural decomposition, and organ transplants among other topics.

Is is meticulously researched. Roach visits all manner of medical, research, and funeral facilities in addition to quoting from medical texts ranging back more than two millennia.

Roach advocates for both organ donation and donating your body for medical research arguing that morticians and the natural process of decay will treat your cadaver no less roughly and provide no benefit to anyone else.

She brings a sense of humor and a willingness to ask the most candid questions to everyone she encounters, and does not shy away from observing every aspect of a medical procedure, test, or burial preparation process that her hosts would allow her to. Here is an example from a visit to workshop where plastic surgeons practice their techniques on disembodied cadaver heads.

“I sense from them only a mild discomfort with their task. As I stop at their tables to watch, they turn to me with a vaguely irritated, embarrassed look. You’ve seen that look if you make a habit of entering bathrooms without knocking. The look says, Please go away. Though the surgeons clearly do not relish dissecting dead people’s heads, they just as clearly value the opportunity to practice and explore on someone who isn’t going to wake up and look in the mirror anytime soon.”
Mary Roach in “Stiff“

Here is her description of a visit to an automobile crash testing facility that triggers a flashback to her own mother’s final months and passing.

“Matt sets down his laptop and helps Ruhan lift the cadaver into the car seat, which sits on a table beside the impactor. Ruhan is right. It’s nursing-home work: dressing, lifting, arranging. The distance between the very old, sick, frail person and the dead one is short, with a poorly marked border. The more time you spend with the invalid elderly (I have seen both my parents in this state), the more you come to see extreme old age as a gradual easing into death. The old and the dying sleep more and more, until one day they “sleep” all the time. They often become more and more immobile until one day they can do no more than lie or sit however the last person positioned them. […]

I find the dead easier to be around than the dying. They are not in pain, not afraid of death. There are no awkward silences and conversations that dance around the obvious. They aren’t scary. The half hour I spent with my mother as a dead person was easier by far than the many hours I spent with her as a live person dying and in pain. Not that I wished her dead. I’m just saying it’s easier. Cadavers, once you get used to them–and you do that quite fast–are surprisingly easy to be around.”

What We Are Made Of

When my younger son was born he was in a breech position and so the obstetrician chose to perform a c-section. The medical team erected a small cloth tent around my wife’s midsection. For whatever reason I decided to peek behind the curtain and see what she was made of. Mother and child came away from the experience in fine shape, but I have never quite felt the same about the human body. This book left me with the same sensation.