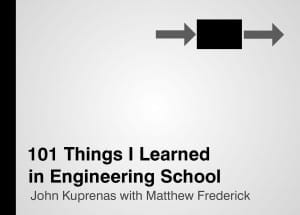 I found “101 Things I Learned in Engineering School” by John Kuprenas and Matthew Frederick very useful.  It’s a great book full of very clear illustrations and examples for most of its 101 two-page chapters.  Here are ten more rules of thumb for entrepreneurs from the second half of the book.

Things I Learned in Engineering School

By bounding the problem you can decide when the range on possible solutions is close enough that further analysis does not provide more value. By definition a consistent approach is easier to explain and easier to delegate. It’s ok to make the intuitive leap but use a detailed analysis to retrace your steps and make sure you have leapt to the correct conclusion.

Systems thinking encourages you to look at interactions and the sum and balance of forces on each component.

75. A successful system won’t necessarily work at a different scale.

There are many examples of this but one of the more memorable comes from Haldane:

“You can drop a mouse down a thousand-yard mine shaft; and, on arriving at the bottom, it gets a slight shock and walks away, provided that the ground is fairly soft. A rat is killed, a man is broken, a horse splashes. For the resistance presented to movement by the air is proportional to the surface of the moving object. Divide an animal’s length, breadth, and height each by ten; its weight is reduced to a thousandth, but its surface only to a hundredth. So the resistance to falling in the case of the small animal is relatively ten times greater than the driving force.”
J. B. S. Haldane “On Being The Right Size”

79. Enlarge the problem space: do root cause analysis.

Many times the effect or impact of a problem is separated in time and space from the cause. Constraining your search too narrowly and neglecting a systemic approach to tracing cause and effect relationships  can mean you don’t even discover a partial solution much less a viable one.

88. Articulate the why not just the what.
Communicate the reasons for decisions made: articulate your intent so that others can investigate alternatives that have not occurred to you and preserve the critical goals for the project. Always probe for the reasons behind design decisions when asked to contribute to a project.

This is also true for “how” thinking: the more you focus on how you are going to do something at the expense of the why the less value you create.

89. All engineers calculate. Good engineers communicate.
Engineers need to use highly specialized terminology and concepts to communicate effectively within their discipline, and must be able to translate their knowledge and ideas into language that can be understood by engineers from other disciplines, clients, and end users.

Engineering is as much a social activity as an intellectual one.

95. There’s a design beside the design.
Understand and plan for the systems and processes need to manufacture, service, and support your design.

This reminds me of two rules from Allan Chochinov’s “1,000 Words Manifesto.”

3. Systems Before Artifacts. Before we design anything new, we should examine how we can use what already exists to better ends. We need to think systems before artifacts, services before products

5. Screws Better Than Glues. This is lifted directly from the Owner’s Manifesto, which addresses how the people who own things and the people who make them are in a kind of partnership. But it’s a partnership that’s broken down, since almost all of the products we produce cannot be opened or repaired, are designed as subassemblies to be discarded upon failure or obsolescence, and conceal their workings in a kind of solid–state prison.

A design is a prediction, the service and support processes are where learning takes place after the pre-production testing.

96. Identify a benchmark against which outcomes will be measured.
An engineering solution must demonstrate measurable improvement objectively. Define and take accurate measurements of the before and after. Get agreement on this benchmark with all relevant stakeholders.

Sure sounds easy doesn’t it?

It’s also adapting proven designs from other domains, sometimes called innovation brokerage. There is too much emphasis on trying to “break all of the rules” and “being original” when the vast majority of the time an improvements to an existing design can be brought to market faster and at much lower risk and still establish a viable niche if they allow you to create a differentiated offering.