“The First Robin” is a Safed the Sage story by William Eleazar Barton collected in “The Wit And Wisdom Of Safed The Sage” (1919). I use it as a point of departure for how to determine if your startup’s  initial journey through Winter is coming to an end.

Now the Winter had been Long, and Very Cold, and the Snow had been deep, and Spring was not yet come. And I rose early in the morning, and I looked out of mine Window, and Behold a Robin. 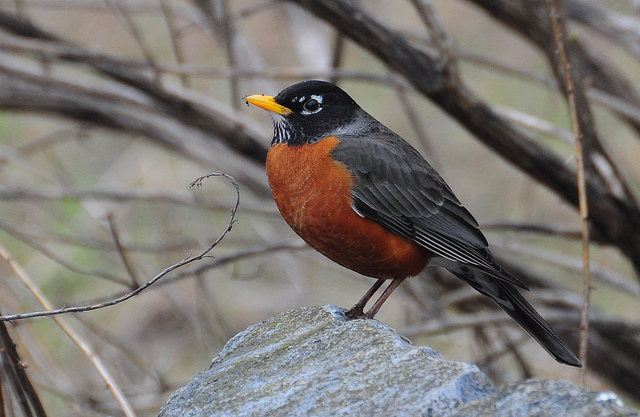 And I called unto Keturah, and said, Come quickly, and see thou hasten thine arrival at the Window. For here is a Friend of ours that is Come from a Far Country to Visit us.

And Keturah came to the Window, and she also beheld the Robin.

Now the Robin looked at us, and hopped about upon the Cold and Bare Ground, and looked for the Early Worm, but the Bird was Earlier than the Worm. And Keturah went to her Kitchen to see what she might find that the Robin would eat.

And I spake to the Robin, and said :

Behold thou has been where it was Warm, and the Sun did Shine. And thou could have stayed there. But here thou art. And thou comed while it is yet Winter, for the Prophecy of Spring is in thy Blood. Thy faith is the substance of things hoped for and the evidence of things not seen. Thou has come many miles, yea hundreds of miles, to a land that lies desolate, because thou has within thy soul the assurance that Spring is near. Oh, that there were in human life some assurance that would send men forth to their High Destiny with as compelling a Conviction!

And I thought of the Eye, that it is formed in darkness, but formed for the light ; and the Ear that is wondrously shaped in Silence, but made for the hearing of Music; and of the Human Soul that is born into a world where Sin is, yet born with an assurance of Righteousness.

And I blessed the Little Bird that had caused me to think of these things.

And I went forth among men that day, and they said, Salaam, Safed. Behold is it not a cold and long Winter?

And I said, Speak to me no more of Winter.

And they said, Wherefore should we not speak of Winter? Behold the Thermometer and the Empty Coal Bin.

But I held mine Head Proudly and I said : Speak to me not of Winter. Behold, on this morning I did see the First Robin. For me henceforth it is Spring.

Barton wrote a sequel “The Robin and the Cherries.”

For my Silicon Valley readers who don’t know what Winter is and what it means to see a robin–a harbinger of Spring–it’s a wonderful feeling. Robins can return even when there is snow on the ground and it looks like Winter may never end. If you have been talking to prospects, trying to determine where the smarter ones–those who can understand the problem you solve and the value of how you solve it–hang out, there is a wonderful moment when you hear one of the following questions:

These are all good questions to have answers for so that the first time you hear them (perhaps after a dozen or so “That was very interesting, you have given us a lot to think about, let me get back to you next week after we have had a chance to huddle and plan our next steps.”).

Garth Rosella and Stan Flewelling collected 80 of William Eleazar Barton’s stories in “Parables of  a Country Parson” (a reprint of their earlier “Millionaire and the Scrub Lady“).  Paul Spite has republished all five books, see “Archeologos Press: The Parables of the Safed the Sage Series”