The Cult of Done Manifesto offers thirteen principles for getting things done. I found them useful to avoiding procrastination and perfectionism. Here are the principles along with my commentary and suggestions for entrepreneurs. 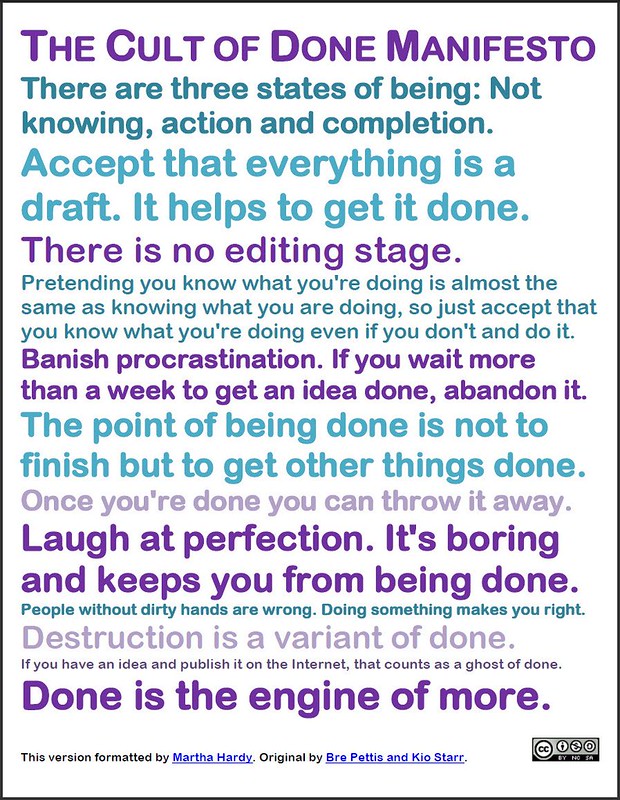 Use the Cult of Done Manifesto to Avoid
Procrastination and Perfectionism

Bre Pettis authored the “Cult of Done Manifesto”in collaboration with Kio Stark in March of 2009. What follows are my suggestions for where and how to apply the 13 elements of the Manifesto. The original numbering has been preserved as section headings. The comments are my observations, extensions, and elaborations.

1. There are three states of being. Not knowing, action, and completion.

For “Not Knowing” I sometimes substitute

Your mileage may vary.

2. Accept that everything is a draft. It helps to get it done.

This is a fantastic insight that helps to inhibit your latent–or sometimes all too active–perfectionism. Think about who you will ask to review your draft and just show it to them as a way of lessening anxiety. A shortlist of potential reviewers is better than just one person. Feedback from any one of them can trigger new insights and revisions, while waiting for a single person can take forever. Subsequent drafts can go to larger audiences.

3. There is no editing stage.

This one I disagree with, I think you do your audience a disservice if you don’t spend some time revising and polishing what you have done. You don’t want obvious mistakes to put potential audience members (or customers) off. And you don’t want to inadvertently communicate a lack of care that may mean your work never finds and audience. Ed Batista offers his interpretation of the implications of this item:

“But this leads to a paradox: “Everything is a draft,” and yet “there is no editing.” So even if we look at life as a series of experiments, there are no rehearsals–we’re live, every moment of every day, and we never truly get a moment back. We only have one shot at it. This creates a tension that can be exhilarating or paralyzing, and coaching is about how to live productively within this tension.”
Ed Batista “Coaching and the Cult of Done“

OK, now I get it. There is synchronous and asynchronous work. A live presentation can benefit from rehearsal (the asynchronous part that is not in front of the audience) but is fundamentally synchronous: it is presented in real-time in front of a live audience. An impromptu presentation would have no specific rehearsal but might be assembled from well-rehearsed (and therefore well-edited) building blocks. An improvised presentation, like answering questions during a talk or a jazz solo, is synchronous and would only allow for iterations or revisions (“Wait, did I just say…What I meant was…”).

Act as if you know what you are doing and be willing to accept a lot of feedback and course correction as you go. The challenge is to maintain your humility and openness to criticism, even as you project a certain amount of confidence. At some level, we only learn from intentional mistakes, where the surprise of failure forces us to update our mental model of the situation or what constitutes a viable solution.

5. Banish procrastination. If you wait more than a week to get an idea done, abandon it.

I think it’s OK to write a file of good ideas or to nurture some projects for longer than a week. I am not sure at what point this becomes procrastination, but I find I often have half a good idea that has benefited from waiting a year or two.  On the other hand, “Rome wasn’t built without deadlines,” as my brother likes to say. So if you are working on a first effort, then setting a deadline of a week to have minimal progress to show for your efforts is a reasonable rule of thumb. It limits the amount of time you spend working without any interim feedback.

“Always set a deadline. A deadline weeds out the extraneous and the ordinary. It prevents you from trying to make it perfect, so you have to make it different. Different is better.”
Kevin Kelly in “68 Bits of Unsolicited Advice“

6. The point of being done is not to finish but to get other things done.

I suppose one damned thing after another beats the same damned thing over and over. More positively, ends become means to new ends, and most summits are just stepping stones.

7. Once you’re done you can throw it away.

I find this very hard. I was in a workshop once where I had to generate a lot  of ideas on index cards. We then had to separate them into two equal piles, the one being the “better” ideas we would continue to work with and the “not as good” ideas that we would no longer pursue. To drive this priority home, the instructor asked us to tear  the index cards with the”less good ideas” into small pieces. I found the prospect of this to be so painful that I slipped the bad ideas into my pocket without tearing them up. But I suppose if you cannot let go of some of your ideas, you cannot make progress on the better ones.

8. Laugh at perfection. It’s boring and keeps you from being done.

Where to draw the line between perfection and excellence is a hard question. Many days I find it difficult to separate the inadequate from the barely good enough. It’s often the case in a startup that you have to pick the “best bad plan” and move forward.

9. People without dirty hands are wrong. Doing something makes you right.

This is another tricky one: in the end, you must take action. But sometimes a conversation with people whose hands are not currently dirty but who have done it before can allow you to start from a better point. Or at least with a better understanding of the constraints and challenges you are facing without having to stumble onto them directly. Even if those people are now dead, they may have written down their experiences, so that your research time is like sharpening your saw before you start to cut down the tree.

“A month in the laboratory can often save an hour in the library.”
Frank H. Westheimer

10. Failure counts as done. So do mistakes.

A documented and well-understood failure, or an intentional mistake, offers a lot of insight into what’s possible. What is sometimes called  “the feasible region.” Your mistakes and failures explore beyond that and can verify there really is a constraint–or not. But the failure has to be intentional and understood to be counted as progress or done. On the other hand, accidents that lead you to remark “that’s interesting” are often the start of a new project.

Most of the really interesting experimental results are unanticipated: “The most exciting phrase to hear in science, the one that heralds new discoveries, is not ‘Eureka!’ but ‘That’s funny …” (an insight attributed to Isaac Asimov). It’s not A or B but the realization that you should be asking a different question.
Sean Murphy in “Market Discovery and Exploration Requires Models from Physics, Biology, and Psychology“

11. Destruction is a variant of done.

The explicit decision to discontinue efforts on a project or initiative can allow you to mark it “done.” In many ways, this is cleaner than leaving it at the bottom half of a list of items that you never even start. Posteriorities–deciding what not to do–are as important as priorities, especially when it comes to organized abandonment: the decision to stop doing things that are no longer working instead of continuing due to force of habit and organizational inertia. For more on this, see “Discovery, Invention, Growth, and Renewal” and “Ebb and Flow.”

The secret of every amazingly productive individual or team is the endless pile of work they decide not to do.
Steve Purcell (@sanityinc)

12. If you have an idea and publish it on the internet, that counts as a ghost of done.

Here is a second one that I take exception to. Writing down your idea or preliminary specification or plan of attack or problem outline at least gets it out of your head and onto paper. It moves you beyond the limits of “I’ll know it when I see it.” It allows others who are so inclined to pick up the baton and carry the idea forward. For me, the ghost of done is a 90% finished blog post in my draft folder that I yet to publish. This is something I am very familiar with I have published 1930 blog posts but have another 1134 ghosts in my draft folder. I am currently attacking this problem by forcing myself to recycle an old post into a new one instead of creating a post from scratch. At my current rate of progress, I will clear this backlog about the time we reach the Singularity in 2033.

I think you have to be intentional in your efforts to promote, remix, and re-purpose older works into your new efforts. There is a certain amount of serendipity in getting your work done and showing it to others. But it’s not enough. No product sells itself. No article promotes itself. You have to be intentional about distribution and promotion, and schedule time for this effort or being done will not be enough.

Perfectionism and procrastination are common afflictions for entrepreneurs, certainly among the less successful. For entrepreneurs, this list neglects any discussion of the audience or the customer. They determine what “done” means. If you can get your ideas out of your head, then you can complement your high standards with a conversation with customers about what would constitute “good enough” or “minimum viable” (to coin a phrase). This will give you a useful definition of  “done.” Even if your efforts are based on the best information you have, they may still fail. But they will provide a lot of value as probes into the unknown. They will allow you to map your ignorance and mistaken assumptions–if you are willing to uncover where your mental map did not match reality. If you are able to persist, you can refine your approach and goals in a sequence of better and more informed efforts.

A Link to the Original Cult of Done

Here is a link to the original version Cult of Done (2009)[Archive.org] which prefaces the list with

Dear Members of the Cult of Done,
I present to you a manifesto of done. This was written in collaboration with Kio Stark in 20 minutes because we only had 20 minutes to get it done.