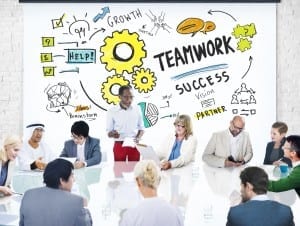 Brian Fuller had an interesting blog post on why you should circle the chairs in a meeting to increase audience participation at “Industry events need to get more social.”

Panels and speeches at events are the live equivalent of newspaper publishing: We talk, you listen. Newspapers and magazines have been pounded for the better part of a decade that the we-say, you read model isn’t what people want in the age of ubiquitous and constant information. Why should it be the same for live events?

Array the chairs in the room in a great circle around the presenter(s). Everyone has to look at everyone else; no one hides; everyone’s forced to be attentive and stay off their laptops and cell phones. The circular set-up makes conversation easier. Up the ante by removing microphones from the speakers and panelists. Make sure the moderators really know how to facilitate a conversation, even if it means calling on people in the audience. Phil Donahue meets sub-threshold leakage.

These are great suggestions but they have a few things working against them. And I say this as someone who really likes the round table  format and has used it many times:

I only mention this to show I like the format and understand its strengths.

The Drawbacks To A Roundtable

Where The Roundtable Format Works Better

I think the roundtable format works better when the attendees are still wrestling with emerging problems where collaboration trumps competitive pressures (e.g. where the “stag hunt” model still holds). This was certainly the case for the blogger BoF’s and the Project Health BoF as well as the Bootstrappers Breakfasts. Everyone is more focused on learning than “getting the word out” about their product or service.

And I think that points up another problem with the format for conferences. Sponsors pay and take part to get the word out about their product. They don’t want to be in a setting where competitors and others can attend in what is effectively a peer position. If you are on a panel, up on a raised platform or stage, there is an unconscious presumption that you must be smarter than the audience. If everyone is sitting around in a circle, then everyone’s opinions matter more or less equally.

This was the inspiration behind the Conversation Central model that had 8-16 around a table having a conversation. The premise was that we would talk about issues facing the EDA industry that had not yet settled into competing solutions from vendors.

Here are some comments that Jeff Jarvis gave at TEDxNYed that mirror Brian Fuller’s:

Why should you be sitting there listening to me? To paraphrase Dan Gillmor, you know more than I do. Will Richardson should be up here instead of me. And to paraphrase Jay Rosen, you should be the people formerly known as the audience.

But right now, you’re the audience and I’m lecturing.

What does this remind of us of? The classroom, of course, and the entire structure of an educational system built for the industrial age, turning out students all the same, convincing them that there is one right answer–and that answer springs from the lectern. If they veer from it they’re wrong; they fail.

Terry Frazier left a long and well thought out comment I wanted to include in the main body of this post:

Industry events are evolving and will adapt over time because they must compete with alternatives. You’ve nicely summarized the limitations of “drum circle confab”-style meetings – which can work wonders in the right setting but are no panacea. No one goes to a Mormon Tabernacle Choir concert to hear the audience sing.

People who live in social media tend to get tunnel vision and forget there are (still, and probably always) large segments of the population for whom social this and social that isn’t all that appealing. And no amount of tweeting is going to change that.

I was really interested in Jarvis’ comments. I’m glad I read the whole link because, out of context, I took a different (and inaccurate) meaning. The world of “Education” is far different from education. It is broken in different ways and needs, in many cases, very different solutions.

Jarvis has good ideas. Sadly I don’t see much evidence that people running Education have any clue how to apply good ideas without making them into bad ideas.

4 thoughts on “Circle the Chairs”