As I grow older I have gained a full appreciation for Laurie Anderson’s observation: “When my father died it was like a whole library burned down.” It’s now 97 months since my father’s death from a heart attack on October 23, 2007 and I still feel the loss.

E-Mail From a Friend 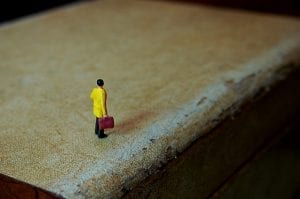 An excerpt from a recent E-Mail from a good friend in response to a suggestion several weeks ago we tag up over the holidays.

Sorry about the lousy response time. Been a crazy couple of months and I’m way behind at work. Two unexpected trips back East–the first to visit my mother in the hospital which resulted in getting her setup for home hospice care, the second for her funeral 3 weeks later.

I started to reply that the death of a parent took a year to recover from–remembering as I did so that when my grandfather was very ill in the hospital, my father had expressed his surprise to me that it had taken him more than a year to get over the death of his mother from an aneurysm a decade earlier.

Instead I wrote, “I am sorry for your loss. I think the death of a parent takes a long time to recover from. Please be well.”

As We Grow Older

“As we grow older we think more and more of old persons and of old things and places. As to old persons, it seems as if we never know how much they have to tell until we are old ourselves and they have been gone twenty or thirty years.  […]

Among the lesser regrets that mingle with graver sorrows for the friends of an earlier generation we have lost, are our omissions to ask them so many questions they could have answered easily enough, and would have been pleased to be asked. There! I say to myself sometimes, in an absent mood, I must ask her about that. But she of whom I am now thinking has long been beyond the reach of any earthly questioning, and I sigh to think how easily I could have learned some fact which I should have been happy to have transmitted with pious care to those who are to come after me. How many times I have heard her quote the line about blessings brightening as they take their flight, and how true it proves in many little ways that one never thinks of until it is too late.”

I came across this passage looking for something else and was struck how well it crystallized my sense of loss and lost opportunity. Pay attention, be curious, ask questions, take notes.

My relationship with my father was a difficult one from my mid-teens to my early thirties, improving with the birth of my older son and my dawning realization of what being a father really entailed. If I am avoiding some old mistakes–and likely making some new ones–I have been trying to have a better relationship with my boys in their late teens and early 20’s than I did with my father. In the end I have learned a lot from my father’s advice, insights, and example–good and bad. I now have to apply the lessons learned and plant what acorns I can.

2 thoughts on “As We Grow Older”