Further Reflections on My Father 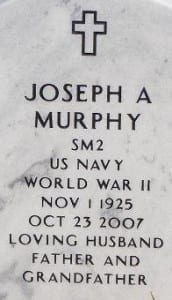 Some further reflections on my relationship with my father seven years after his death.

I figured he had lived through so many things that as long as he stayed indoors and avoided getting hit by lightning he would come to my funeral in a decade or two. At the time I told close friends that it hadn’t really sunk in yet. I would normally talk to him once a week for an hour or so. Now I mainly talk to him in the shower when he chews me out from time to time for a recent stupidity. He asks me what I am going to do to fix or improve a situation and my most common answer is “I don’t know.”

Robert Anderson observed, “Death ends a life, but it does not end a relationship, which struggles on in the survivor’s mind toward some resolution which it may never find.” That’s certainly true in my experience. My father’s advice was especially on point in difficult situations, he could cut to the heart of issues and understood how to calculate downside risk and determine possible courses of action that would minimize the potential damage or worst case scenario. As I work with other attorneys I see this as a not uncommon strength of the profession. It’s certainly a perspective I fit naturally into.

I think it was in the nature of my father’s work as primarily a defense attorney that he was paid to anticipate a wide range of potentially damaging moves by adversaries in pre-trial deposition, in ongoing settlement negotiations, and at trial. His primary mode was one of risk limitation. One area where I am different is that I often see the upside and the opportunities to be grasped. And some trends or harbingers that are not threats but potential sources of opportunity or upside.

When My Father Died A Library Burned Down

Laurie Anderson observed, “When my father died it was like a whole library burned down.” He never had any appreciation for math or engineering or what he called “computers” a word that in his pronunciation seemed to cover a multitude of activities related to technology. In later years he was interested in using computer visualization and animation for court room exhibits, primarily for accident reconstruction, after he worked with a Los Angeles firm on an aviation case that used it to reconstruct a runway collision that blended tower chatter with black box data and animation of aircraft locations and movement. But he was extremely proficient at negotiation and finding ways to step across the table and anticipate a wide range of potential perspectives. He remarked more than once that good attorneys try cases but great attorneys are able to find a settlement before trial.

Now that I have mutated into some oddball species of salesman, the point of customer conversations is not to win the argument but find a win-win settlement.

Jonah Goldberg wrote this in February 2012 one year after the death of his brother. It is not available on-line but reprinted here with his permission (he asked that I let you know you can sign up for his newsletter at http://www.nationalreview.com/newsletters). I found it a poignant encapsulation of the sense of irreplaceable loss at the death of a close family member.

It was a year ago today that my brother died.

A couple weeks after the funeral, I wrote in the G-File:

Unique is a misunderstood word. Pedants like to say there’s no such thing as “very unique.” I don’t think that’s true. For instance, we say that each snowflake is unique. That’s true. No two snowflakes are alike. But that doesn’t mean that pretty much all snowflakes aren’t very similar. But, imagine if you found a snowflake that was ten feet in diameter and hot to the touch, I think it’d be fair to say it was very unique. Meanwhile, each normal snowflake has its own contours, its own one-in-a-billion-trillion characteristics, that will never be found again.

Families are similarly unique. Each has its own cultural contours and configurations. The uniqueness might be hard to discern from the outside and it certainly might seem trivial to the casual observer. Just as one platoon of Marines might look like another to a civilian or one business might seem indistinguishable from the one next door. But, we all know the reality is different. Every meaningful institution has a culture all its own. Every family has its inside jokes, its peculiar way of doing things, its habits and mores developed around a specific shared experience.

One of the things that keeps slugging me in the face is the fact that the cultural memory of our little family has been dealt a terrible blow. Sure, my mom’s around, but sons have a different memory of family life than parents. And Josh’s recall for such things was always not only better than mine, but different than mine as well. I remembered things he’d forgotten and vice versa. In what seems like the blink of an eye, whole volumes of institutional memory have simply vanished. And that is a terribly lonely thought, that no amount of company and condolence can ease or erase.

Alas, that’s still true. I can feel so much of my life fading away like a photograph left too long in the sun, so many memories like a name forever on the tip of my tongue. Punch lines to stories are forgotten, making trying to remember the stories they hang on too painful to bother.