Some thoughts on the half-fast entrepreneur with half-vast experience.  Any resemblance to the author or the reader is purely coincidental.

Not Too Slow, Not Too Fast, More Half-Fast

“Bees are not as busy we think they are. They just can’t buzz any slower.”
Kin Hubbard

True for entrepreneurs with ADD as well. Equanimity and the resulting flow is more productive and than it may first appear. For my part I spend some days interrupting half-finished tasks to half-finish new tasks before I interrupt myself to… I am not too slow and not too fast, most of the time I am a half-fast entrepreneur. 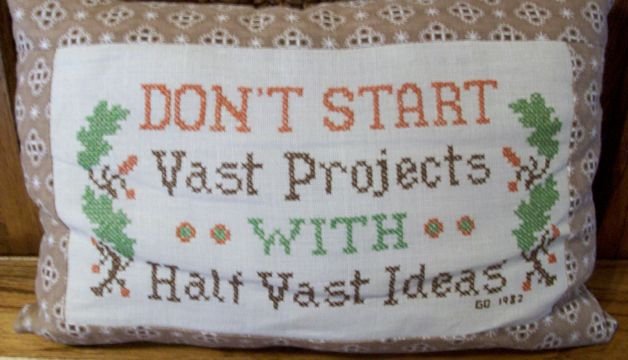 “If a little knowledge is dangerous, where is the man who has so much as to be out of danger?”
Thomas Huxley

How much experience is enough for an entrepreneur to proceed confidently? Sometimes proceeding confidently is what introduces risk. If you are a novice and know it then you are likely to proceed tentatively.

It’s later that you can hatch a catastrophe.  Fred Brooks referred to this as the “Second System Effect” in “The Mythical Man Month:

“An architect’s first work is apt to be spare and clean. He knows he doesn’t know what he’s doing, so he does it carefully and with great restraint.

As he designs the first work, frill after frill and embellishment after embellishment occur to him. These get stored away to be used “next time.” Sooner or later the first system is finished, and the architect, with firm confidence and a demonstrated mastery of that class of systems, is ready to build a second system.

This second is the most dangerous system a man ever designs. When he does his third and later ones, his prior experiences will confirm each other as to the general characteristics of such systems, and their differences will identify those parts of his experience that are particular and not generalizable.

The general tendency is to over-design the second system, using all the ideas and frills that were cautiously sidetracked on the first one. The result, as Ovid says, is a “big pile.”

How To Avoid Becoming a Half-Fast Entrepreneur

I suppose the easy answer is “you’ll have to figure that one out for yourself.” But it seems to me that the key mistakes to avoid are:

“I get a weird feeling these days. If a little knowledge is dangerous, a lifetime of learning is goddamned catastrophic. And so nothing gives me so much pleasure as doing business with old men. The survival of an intelligent, ethical man into old age is the testament of civilization.”
Michael Bowen in “Prick“

1 thought on “A Half-Fast Entrepreneur with Half-Vast Experience”