Quotes For Entrepreneurs Collected in December 2019

My December 2019 collection of quotes for entrepreneurs has a focus on embracing your unique strengths and following through.

Quotes For Entrepreneurs Collected in December 2019 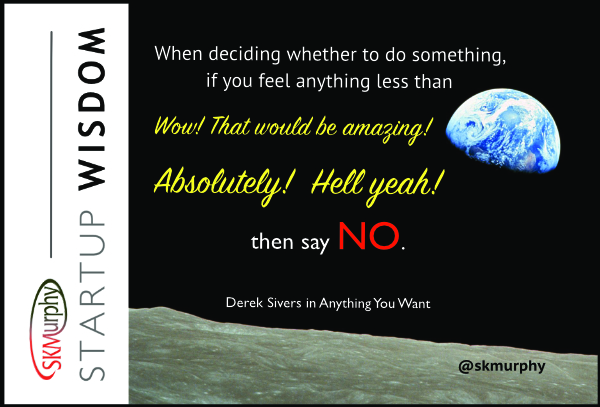 When deciding whether to do something, if you feel anything less than ,
“Wow! That would be amazing! Absolutely! Hell yeah!”
then say NO.
Derek Sivers in “Anything You Want”

“Instead of searching for a magic solution, they instrumented the entire system and just started rebuilding every part that was about to break.

It was a slow and steady approach. It took time. But within six months (or thereabouts), we had a much more stable system.

Grinding isn’t very satisfying. It is hard to stand up in front of everyone and say “we are going to fix things around here bit by bit with a lot of hard work.” Big flashy moves are an easier sell most of the time. But they don’t work nearly as well and are prone to complete and abject failure.

It’s important to take two things away from this story. Growth in demand for the system had already created the “big flashy move.” Now was the time to instrument the system, analyze and debug each failure to root cause, and deliver reliable operation at the new level of load.

“A garden is always a series of losses set against a few triumphs, like life itself.”
May Sarton

Gardening is a good metaphor for managing complexity and fostering emergent opportunities.

“Improvement, when it came, was the result of the creativity of millions, not the state planner.”
Richard Fernandez “Rebels Without a Cause“

“If we are ever in doubt what to do, it is a good rule to ask ourselves what we shall wish on the morrow that we had done.”
John Lubbock

This is backcasting or working backward from a desirable future. Another approach is minimax, which is to minimize the worst case loss.

“I embrace emerging experience, I participate in discovery. I am a butterfly. I am not a butterfly collector. I want the experience of the butterfly.”
William Stafford

“Over the past 60 years, the energy efficiency of ever-less expensive logic engines has improved by over one billion fold. No other machine of any kind has come remotely close to matching that throughout history. Consider the implications even from 1980, the Apple II era. A single iPhone at 1980 energy-efficiency would require as much power as a Manhattan office building. Similarly, a single data center at circa 1980 efficiency would require as much power as the entire U.S. grid. But because of efficiency gains, the world today has billions of smartphones and thousands of datacenters.”
Mark P. Mills in “Energy and the Information Infrastructure Part 3: The Digital ‘Engines of Innovation’ & Jevons’ Delicious Paradox“

Jevons paradox is that increasing efficiency, by lowering the cost of a good or service, can often increase total demand and therefore consumption or use.

“It is wholly a confusion of ideas to suppose that the economical use of fuel is equivalent to a diminished consumption. The very contrary is the truth.”
William Stanley Jevons “The Coal Question” (1866)

“It’s important to have a place where you can show up as you are: where your whole self is welcome.”
Alexander Den Heijer

I hope that bootstrapping entrepreneurs find the Bootstrapper Breakfasts this comfortable and supportive. It’s a safe place to share concerns and challenges and get other perspectives that help you to change tactics and move forward. We are also energized when a bootstrapper shares a recent success.

“What you require to be reported on regularly will improve, but only if you are selective. How you fashion the reporting systems announces your priorities
and will set the institution’s priorities.”
Donald Rumsfeld in “Rumsfeld’s Rules“

“History never tells us what would have happened, only what did happen.”
H.W. Baird in “The Age of Gold“

“The most radical thing you can do is introduce people to one another.”
Glenn Hilke

“There are those who forget that death will come to all. For those who remember, quarrels come to an end.”
The Dhammapada

I can remember I was in the middle of a bitter argument with my mother and I had this epiphany that I would be attending her funeral at some point in the next decade or so and I realized I needed to find a way to get along with her in the time we had left.

“What makes things so difficult is that I have never been at this point in my life before.”
Ashleigh Brilliant 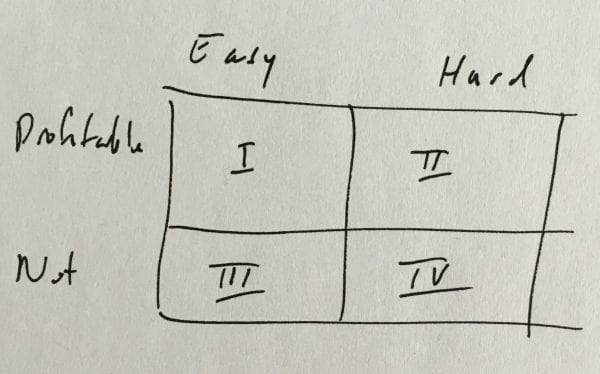 John Cook (@JohnDCook): Evaluating possible projects based on easy vs hard, profitable vs not. Lots of candidates fall in quadrants II, III, and especially IV. Projects in quadrants II and III may be fine, especially if they have the potential to migrate towards quadrant I, but we have to stay outside the event horizon of quadrant IV black holes. It’s hard to navigate. I’ve been burned more often by being too speculative than by being too short sighted. I try steer a middle course, getting to the long-term goal by a sequence of profitable steps.

Sean Murphy (@SKMurphy): I think quadrant IV is particularly attractive for engineers and scientist because they “difficult to accomplish” as a proxy for “highly valued by customer” when it’s often not the case. Many in IV are driven by individual or team idiosyncrasies initiated without customer input.

“An experiment is never a failure solely because it fails to achieve predicted results. An experiment is a failure only when it also fails adequately to test the hypothesis in question, when the data it produces don’t prove anything one way or another.”
Robert Pirsig in “Zen and the Art of Motorcycle Maintenance“

I used this in “Organizing Your Experiment Log.” I was reminded of this when David Perell cited it in his “Coolest Things I learned in 2019”

“One day a man walked by me in the street playing a guitar. He put my fingers on the strings and I played, not as if I were learning but as if I were remembering.”
Andes Segovia

So many things seemed to snap into place when I was younger that I never really learned how to study. I can remember memorizing Latin and French vocabulary words, working math problems, and revising essays in high school and college. But many principles in math and science were clear once they were explained to me. Electronics was always a mystery and for the most part remains one, which is funny given that I spent a decade working in the semiconductor industry.

“Mistakes are a fact of life.
It is response to error that counts.”
Nikki Giovanni

“System 1 [human intuition] excels at constructing the best possible story that incorporates ideas currently activated, but it does not (cannot) allow for information it does not have. The measure of success for System 1 is the coherence of the story it manages to create.

Jumping to conclusions on the basis of limited evidence is so important to an understanding of intuitive thinking that I will use a cumbersome abbreviation for it: WYSIATI, which stands for what you see is all there is. System 1 is radically insensitive to both the quality and quantity of the information that gives rise to impressions and intuitions.”

Kahneman offers an interesting theory of the limits of intuition (the “flash of insight” that is “thinking fast”).  I found this formulation by Morgan Housel more directly actionable:

“The idea that what you don’t see might refute everything you believe just doesn’t occur to us. Take this seriously and you realize that few things matter more than being open-minded and surrounding yourself with people from different backgrounds and experiences.”
Morgan Housel in “Overlooked Truths of Business and Investing Success” (2016)

Sometimes the only way out is through.

“The highest reward for man’s toil is not what he gets for it, but what he becomes by it.”
John Ruskin

Similar to Edwin Land’s observation that, “The bottom line is in Heaven.”

“History never looks like history when you are living through it. It always looks confusing and messy, and it always feels uncomfortable.”
John W. Gardner

Starting an ultimately successful company feels the same way. I think more mistakes are made when you feel comfortable. Overconfidence and panic are equally fatal.

from Nine Lies About Work by Marcus Buckingham and Ashley Goodall

“No policy made in the shadows can survive in sunlight.”
James Kirkup

Always act as if what you are doing will become widely known. Only make plans that an survive public scrutiny. One of the key tasks we help early stage teams with is preparing for and executing successful negotiations.  There is a belief among some engineers that the best marketing and sales people are the most accomplished liars.In my experience nothing could be further from the truth. See Honesty in Negotiations for more.

“The knowledge of personal failure…is the invaluable predicate of all honest compassion.”
Anne Truitt

You have to work actively to acquire and/or transmit the hard won lessons of experience, one marker for effective startups is the active use of project post mortems (also called an “after action” or retrospective). There is a lot of wisdom in Systemantics. Here is another quote I listed in “Ten Quotes To Help You Bring Order Out of Chaos.”

“The Party is a racket. The guys at the top are not any different from the ones you deal with at the bottom. The Party exists to make sure their kids have a spot at the front of the line no matter how much more your kids deserve it. You are not forced to call Xi all these fancy titles because it will help him restore China to its ancestral glory: you are forced to do all of that so Xi Jinping’s daughter gets into Harvard and his family racks up homes in Hong Kong. All of the taxes, the censorship, the ridiculous rules and regulations, the blustering about war, the hero-worship and the propaganda, the detention centers and the cameras—it is all a racket. You live a slave so that someone else’s children can get ahead.”
Tanner Greer (@Scholars_Stage) in “Fissures in the Facade“

This is Green’s perspective on the realities of government of China.

“The face of war changes with new technology. But its essence remains the same, because human nature stays constant.”
Victor Davis Hanson (@VDHanson) in “Recalling the Battle of the Bulge.”

“You see folks here pay it forward every day of the year just as many Americans do, without fanfare and without attention for their good deeds. Everyone here clings to the sense of community that keeps its citizenry connected, stable, and engaged.
Salena Zito in “The Town That Wouldn’t Be Passed By”

“The trouble is, you think you have time.”
Jack Kornfield

Dorai Thodla (@dorait):  what is your idea of a cool conversation?

“Staying in a burning house feels safer than being homeless.”
Slava Akhmechet (@spakhm)

Especially if your room is nicely furnished. See “A Nicely Furnished Room In A House That’s Burning Down.”