Quotes for entrepreneurs curated in January 2021. Theme is co-evolution and making adjustments to reflect new realities.

Quotes for Entrepreneurs Curated in January 2021

I curate these quotes for entrepreneurs from a variety of sources and tweet them on @skmurphy about once a day where you can get them hot off the mojo wire. At the end of each month I curate them in a blog post that adds commentary and may contain a longer passage from the same source for context. Please enter your E-mail address if you would like to have new blog posts sent to you.

Theme for this month is co-evolution or making adjustments to reflect new realities. 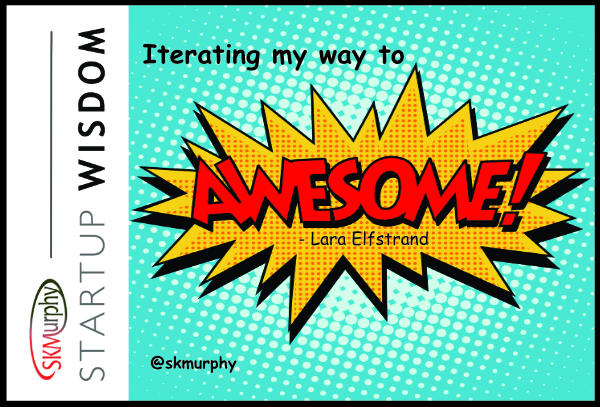 With the departure of 202o,  it’s time to get back to exploring, experimenting, and iterating our way to awesome.

“Walking is really a magic cure for people who want to think straight. “Solvitur ambulando,” said Diogenes the Cynic two millennia ago. “It is solved by walking.”
Austin Kleon in “Keep Going“

I highlighted this in “Austin Kleon’s ‘Keep Going’ Offers Practical Advice on Perseverance.”

“Patriotism is not found in short, frenzied outbursts of emotion, but in the tranquil and steady dedication of a lifetime.”
Adlai Stevenson

“Every storm runs out of rain”
Maya Angelou

“A step backward, after making a wrong turn, is a step in the right direction.”
Kurt Vonnegut in “Player Piano“

“I’ve seen a lot of hard working entrepreneurs fail, and I’ve come to the conclusion that working hard, while never a bad thing, is not really the magic thing that leads to great inventions or successful outcomes. So often people are working hard at the wrong thing. Much more important than working hard is knowing how to find the right thing to work on:

Four prompts that target the psychological roots of the procrastination problem.

Jacob Wessel quoted in “The four keys that could unlock procrastination.“

“When you want to know how things really work, study them when they’re coming apart.”
William Gibson in Zero History

“The time and place to do nothing was yesterday.”
Drew Byrne

“In the end, launching an entrepreneurial venture is hope that persists into a leap to faith.”
Sean Murphy, closing line in  “Christopher Moore’s Coyote Blue.”

Inspired by this quote:

“That’s the scary thing about hope, if you let it go too long it turns into faith.”
Christopher Moore in “Coyote Blue“

“The field of efforts between intention and result is where we learn our craft.”
Michael Wade in “Random Thoughts: Brief Reflections and Moments of Clarity“

“Sometimes the task of rebuilding—of accepting what has been broken and making things anew—is so daunting that it can almost feel easier to believe it can’t be done.
But it can.”
Alan Newhouse in “Everything is Broken“

“As man’s aims change, so too do his artifacts–and vice versa”
Herbert Simon “Sciences of the Artificial”

I think the pursuit of Moore’s Law pushed firms in the semiconductor industry toward design automation, simulation, and verification. I have only recently come to appreciate that design is useful paradigm for entrepreneurs too. We could reframe a mastermind group session as a design review–or an after action–on your business model.

This also reminded me of a passage from “Plagues and Peoples”

“Details of early domestications remain unclear. One must assume a process of mutual accommodation between humanity and various domesticable species. This involved rapid and sometimes far-reaching change in the biological character of domesticated plants and animals as a result of both accidental and deliberate selection for particular traits. Conversely, one can assume that a radical, if rarely deliberate, selection among human beings occurred as well. Individuals who refused to submit to laborious routines of farming, for instance, must often have failed to survive, and those who could not or would not save seed for next year’s planting, and instead ate all they had, were quickly eliminated from communities that become dependent upon annual crops.”
William H. McNeill in “Plagues and Peoples“

“The important thing to remember about aphorisms is that they never, ever apply to you.”
Aaron Haspel

“It is impossible for someone to lie unless he thinks he knows the truth. Producing bullshit requires no such conviction.”
Harry Frankfurt

How committed are you to the truth?  Or is it just, “Hurray for our side.” If you are more concerned with who said something what the content of what they said you may trying to cheerlead or just avoiding the hard work of doing your own analysis.

2021 is a challenging time to find common ground for dialog and deliberation. Reasonable men may differ or agree to disagree. Better men find a way to disagree without being disagreeable, certainly if they want to change someone’s opinion.

“2020 was also the year when media declared Sweden as a failed state, the “World’s Cautionary Tale”, predicting massive deaths unless Sweden, like almost everybody else, fully LockedDown.

And 2020 was the year when a lot of economies, public as well as private, businesses and entire industries went bust, because the response governments took to mitigate the pandemic.

2020 was also the year when China smashed the western world so hard that it will take decades for the west to recover, if indeed ever.

And finally, 2020 was the year when we stopped living due to fear of dying.

Good analysis based on Swedish data. His conclusions “Covid 2020 was real (and continues to be real at least until spring 2021, as all seasonal viruses). The number of deaths 2020 was higher than it should have been, which ever way we define “Excess”. Not exceptionally higher, and far from all the disaster scenarios painted by media, politicians and failed scientists. ”

“Life is a series of choices, all made at too young an age.”
Robert Brault

Of course it’s only be looking back, sometimes years later, to connect that dots that we realize the implications of choices that we made.

“Life can only be understand backward, but it must be lived forward.”
Soren Kierkegaard

I am indebted to Palle Jorgensen for the following detailed sourcing to the original Danish (who notes “Søren Kierkegaard, Journalen JJ:167 (1843), Søren Kierkegaards Skrifter, Søren Kierkegaard Research Center, Copenhagen, 1997–, volume 18, page 306. Thanks to Karsten Kynde, Søren Kierkegaard Forskningscenteret, for the Danish text of the quotation and directions to its location in print. The English translation of the long quote is my own. The Danish short form ‘Life can only be understood backwards; but it must be lived forwards’ is due to Julia Watkin.”)

“It is really true what philosophy tells us, that life must be understood backwards. But with this, one forgets the second proposition, that it must be lived forwards. A proposition which, the more it is subjected to careful thought, the more it ends up concluding precisely that life at any given moment cannot really ever be fully understood; exactly because there is no single moment where time stops completely in order for me to take position [to do this]: going backwards.”
Soren Kierkegaard

I used this in Eliza Calvert Hall: Piecing a Quilt is Like Living a Life

enable people to become not only polymaths but original thinkers– as opposed to people who pursue careers inside established academic departments. After all, where do you go to school to become something that hasn’t been invented yet?”
Richard Fernandez in “What the Education of Batman Teaches about College and Academic Freedom“

“Success: achieving one’s goals. Wealth is a measure of success only if wealth is the goal. Too often people judge the success of others by their own goals.”
Peter Siviglia “The Sidelines of Time“

“Truth, it seems, is always bashful, easily reduced to silence by the too blatant encroachment of falsehood.  The prolonged absence of any free exchange of information within a country opens up a gulf of incomprehension between whole groups of the population, between millions and millions. We simply cease to be a single people, for we speak, indeed, different languages.”
Aleksandr Solzhenitsyn in “The Gulag Archipelago 1918–1956”

“We are not talking about mere instinctive conformity — it is, after all, a perennial failing of mankind. What we are talking about is a rationalized conformity- an open, articulate philosophy which holds that group values are not only expedient but right and good as well. Three mutually supporting ideas form the underpinning: (1) that moral values and ethics are relative; (2) that what is important is the kind of behavior and attitudes that makes for the harmonious functioning of the group; (3) that the best way to achieve this is through the application of “scientific” techniques.”
William Whyte in “Groupthink” (1952)

The term was popularized by Irving Janis in his book “Victims of Groupthink” (1972) with a second edition entitled Groupthink (1982). Janis does not reference Wiliiam Whyte’s article and does not credit him for the coinage of groupthink.

“If a business is built on misleading users on data exploitation, on choices that are no choices at all, then it does not deserve our praise. It deserves reform.”
Tim Cook in his 2021 keynote at Europe’s 2021 Computers, Privacy and Data Protection conference (reported in Telangana Today)

“And I want to say something to the schoolchildren of America who were watching the live coverage of the shuttle’s takeoff. I know it is hard to understand, but sometimes painful things like this happen. It’s all part of the process of exploration and discovery. It’s all part of taking a chance and expanding man’s horizons. The future doesn’t belong to the fainthearted; it belongs to the brave. The Challenger crew was pulling us into the future, and we’ll continue to follow them.”
Ronald Reagan