Ipaiku is a character in a “science fiction detective novel” that I wrote some drafts for in 1975-78. This vignette is one of the early scenes in the novel that tries to capture a particular sense of movement beneath the surface or the potential energy latent in apparent stillness.

Ipaiku sat on the edge of his bed 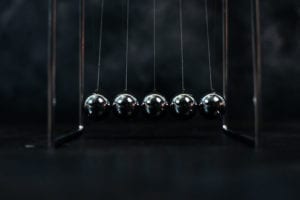 Ipaiku sat on the edge of his bed with one sock on his left foot and another in his right hand, gazing out of his apartment window at the Toronto skyline. He was in a drowsy mood that gave a strange clarity to his vision–more accurately he was focusing his mind’s eye on the city.

Toronto was a silent grey city in the brittle light of dawn. Twilight purpled the frozen mist overhead and the snow at its feet. A rapitrans train floated idly above its tracks on a thin gap of magnetic repulsion. From a distance it looked like an intricately detailed component of a child’s model railroad. Not a car was moving on the streets and his building was silent except for the reassuring white noise of the heater.

For an instant the city stood still, like a jugglers club at the top of it’s arc in the moment it has stopped ascending and just before it starts descending, or an athlete in that brief period of meditation and preparation before the lifting of a great weight.

Ipaiku was reminded of a five ball pendulum in the moment after a ball on one end has struck the ball next to it: all five balls form a contiguous line that contains the kinetic energy from the one that fell, yet none move. A quick glance would reveal five placid ball bearings.

The digital alarm clock on the end table next to his bed clicked and as he glanced at the 6:20 on the readout he was not sure whether it was dusk or dawn, whether he should put his right sock on and get ready for work or take his left sock off and lie down for a nap before dinner.

But only for an instant and then the stillness departs: the club speeds back to he juggler’s hand, the barbells ascend over the weightlifter’s head, and one ball bearing arcs away from the rest. Ipaiku had already realized subconsciously that the click was the precursor to his alarm buzzer turning on and sent a trickle of adrenaline into his system: he reached over to turn the alarm off just as it started to buzz.

The city stirred in front of him. Streetlights winked out as the subzero haze yellowed into day. The morning rapitrans began their first runs.

I tried to capture the sensation of getting your second wind after waking from too little sleep, and the boundary state of consciousness that occurs between sleep and full awakening called hypnopompia. Ipaiku is dreaming of awakening, and the city awakening with him, just as his alarm goes off and he is fully awake.

I wrote and revised this between 1975 and 1978; I remember reading an article where Toronto was heralded as “the city of the future.” The story was set in 1990. From the perspective of 1975 –six years after the first moon landing fulfilled an objective set when we could put objects but not men in space–15 years of additional progress seemed full of possibility. And they were, but perhaps not in the ways that I envisioned.

I think this is the first piece of fiction I have knowingly published on the blog. It’s a “spiritual Sunday” piece of a different sort. I thought the sensation of waking up and not knowing what time it was is a not infrequent result of entrepreneurs pushing themselves to the edge of exhaustion. And the sense that of things becoming, of the balls in motion, not being apparent to someone taking a quick look at a situation.