Founder: Sean Murphy’s advice to “zoom in for traction” encouraged me to shift my focus from a region to a single city. This allowed me to generate references that encouraged other prospects to sign up.”

Zoom In for Traction, Then Slowly Zoom Out for Impact 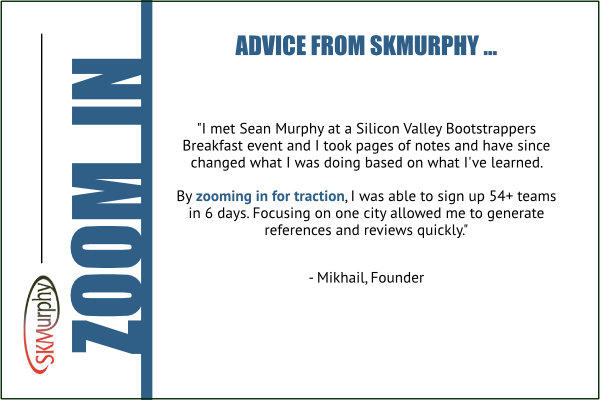 ”I met Sean Murphy at a Silicon Valley Bootstrappers Breakfast event and I took pages of notes and have since changed what I was doing based on what I’ve learned. By zooming in for traction, I was able to sign up 54+ teams in 6 days. Focusing on one city allowed me to generate references and reviews quickly.”
Mikhail, Founder

SKMurphy Take: You need to zoom in for traction, then slowly zoom out for impact.

If you can get to 5% or so of the market, the reference effect begins to kick in. If it doesn’t kick in 10% you have a problem with the product. At 15% or roughly 1/6 of the market, you can only be displaced if you screw up badly.

A market is defined as people who reference each other’s purchase decisions. Initially, the buyer’s decision is one of “should I” purchase. But as you develop traction and attract competition, it will become “which one” do I buy. Remember that competition does not always match your solution’s form/fit/function (e.g. iPhone Directions App replacing TomTom).