Two speeches by Werner Heisenberg from the play Copenhagen by Michael Frayn. The first is a clever description of the uncertainty principle and the second explores the horrors of war.

Copenhagen is a play by Michael Frayn, based on a meeting in Copenhagen in 1941 between physicists Niels Bohr and Werner Heisenberg, and Margrethe Bohr. I watched the 2002 film version recently and found it fascinating. The three principles meet in the afterlife, where they revisit the 1941 meeting and related events, trying to understand them. Frayn did extensive research on the 1941 meeting and the deeper question of why Germany did not develop atomic weapons under Heisenberg’s leadership. His conclusion, based in part on surveillance audio of Heisenberg and other German nuclear scientists reacting to the US bombing of Hiroshima while they were in British custody, is that Heisenberg miscalculated the amount of material needed for critical mass as a ton and not kilograms. As a result, he decided to pursue atomic reactors instead.

In an extensive 50 page Postscript (actually two postscripts) to the play, Michael Frayn writes: “Heisenberg’s experiences in Germany before and during the war is taken from the historical record. I have filled out some of the details, but in general what he said happened to him during his nocturnal walk in Faelled Park and during the Berlin air-raid is based very closely upon the accounts he gave in life.” So these speeches, while not verbatim, are grounded in what he said. Below are two passages, one about his visualization of the uncertainty principle and another drawn from his account of surviving the firebombing of a city. 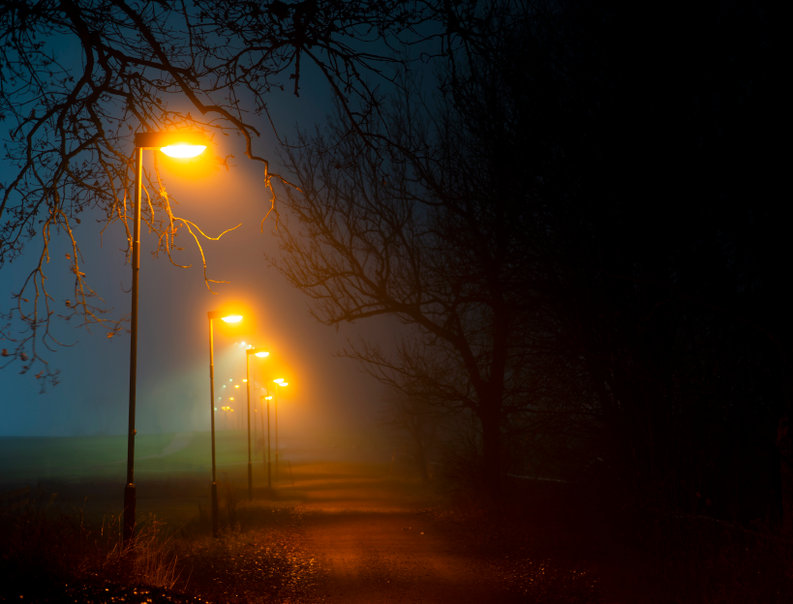 HEISENBERG: And that’s when I did uncertainty. Walking round Faelled Park on my own one horrible raw February night. It’s very late, and as soon as I’ve turned off into the park I’m completely alone in the darkness. I start to think about what you’d see, if you could train a telescope on me from the mountains of Norway. You’d see me by the street-lamps on the Blegdamsvej, then nothing as I vanished into the darkness, then another glimpse of me as I passed the lamppost in front of the bandstand. And that’s what we see in the cloud chamber. Not a continuous track but a series of glimpses – a series of collisions between the passing electron and various molecules of water vapor. Or think of you, on your great papal progress to Leiden in 1925. What did Margrethe see of that, at home here in Copenhagen? A picture postcard from Hamburg, perhaps. Then one from Leiden. One from Gottingen. One from Berlin. Because what we see in the cloud chamber are not even the collisions themselves, but the water droplets that condense around them, as big as cities around a traveler–no, vastly bigger still, relatively complete countries–Germany…Holland…Germany again. There is no track, there are no precise addresses; only a vague list of countries visited.
Michael Frayn in Copenhagen [Archive.org]

HEISENBERG: “You never had the slightest conception of what happens when bombs are dropped on cities. Even conventional bombs. None of you ever experienced it. Not a single one of you. I walked back from the center of Berlin to the suburbs one night, after one of the big raids. No transport moving, of course. The whole city on fire. Even the puddles in the streets are burning. They’re puddles of molten phosphorus. It gets on your shoes like some kind of incandescent dog-muck– I have to keep scraping it off –as if the streets have been fouled by the hounds of hell. It would have made you laugh– my shoes keep bursting into flame. All around me, I suppose, there are people trapped, people in various stages of burning to death. And all I can think is, ‘How will I ever get hold of another pair of shoes in times like these?'”

“Copenhagen is again, problems I’ve been thinking about for a long time, about quantum mechanics and indeterminacy. And then I happened to read a book by Thomas Powers called Heisenberg’s War which told the story of Heisenberg’s trip to Copenhagen in 1941, much written about then, but I had never come across it, and since I’d read it, I thought: this suggests, this seems to encapsulate something about the difficulty of knowing why people do what they do and there is a parallel between that and the impossibility that Heisenberg established in
physics, about ever knowing everything about the behavior of physical objects.”
Michael Frayn in an interview for the British Library with Ursula Canton on 27 February 2004

“We have to remember that what we observe is not nature in itself, but nature exposed to our method of questioning.”
Werner Heisenberg

I used this quote to close  “Q: Is Building The Wrong Product A Waste of Time?” I originally curated it in July  2012 and again in October 2019.

The “path” comes into existence only when we observe it.
Werner Heisenberg

I originally curated this in November 2014.

“Every tool carries with it the spirit by which it has been created.”
Werner Heisenberg

I originally curated this in February 2013.