Eight memories of my father from my youth. They have an emotional salience that underscores one or more lessons I took away–eventually.

Father’s Day 2022: Some Memories of My Father

Here are eight distinct memories of my father

Suddenly Realizing How Careworn His Expression was

Our family took a two-week vacation in the Ozarks when I was in fifth grade. I brought my Minolta camera along. We sent to Silver Dollar City, and one of the pictures I took was my father relaxing at a picnic table after lunch, smoking a cigarette. I can remember looking at that picture a few years later–my father had quit smoking by then–and suddenly realizing how careworn his expression was.

Later insights:  I was ten or eleven when we went to the Ozarks. My parents were not getting along–they had a long and quarrelsome marriage but stayed together. It took me a while to realize that many other parents did not argue as much as mine did. When I got to college and found my first serious girlfriend I was surprised that we got along most of the time and thought there might be something wrong with us because we did not fight as much as my parents did. There were certainly challenges in my father’s law practice as well that he was more candid about when we would speak in later years.

Why Can’t They Sing in English?

In sixth grade, I got an enlarger for my birthday, and we set up a darkroom in the basement. Every few weeks, my father and I would drive into the city and shop for photographic supplies at St. Louis Photo. Texaco sponsored Metropolitan Opera radio broadcasts that we would often listen to on the way home. I would ask, “Pop, what are they singing? I cannot understand it. What language is that?” He would answer, “It’s Italian “or “It’s German,” followed by “but listen to the music, it’s beautiful.” It took me a while to gain an appreciation for opera. I purchased the London Symphony version of “Tommy,” but although Pete Townsend called it a “rock opera,” it was more of a concept album. I can remember my grandfather and my father listening to Handel’s Messiah. It took me until my 30’s to understand it. Then, early this year, my younger son told me how much he liked “Hamilton.” I listened to a song or two, and it did not click. Then I sat down and watched the video recording and was hooked. But I think it’s more of a musical than an opera.

Later insight:  I was going to have different tastes and a different career from my father. Although we had a lot in common.

“The Commercial Utilization of Noise”

My father, like my grandfather, had an extensive classical music record collection that he would listen to often. As a result, I did gain an appreciation for many classical composers, including Beethoven, Mozart, Bach, and Handel. My brother and I both enjoyed listening to a wide range of music, but my father never liked rock. I remember him listening for 30 seconds to a record I was playing on his stereo and remarking, “That’s not music. That’s the commercial utilization of noise.”

He later bought headphones for Kevin and myself so that he would not have to listen to our music. I guess he got tired of saying “turn that !@%&! off” and could now say “please use your headphones.” I can remember watching several football games with the sound off and classical music as the soundtrack, he could follow the game from the scoreboard and did not like listening to the announcers or the commercials.

Later insight: my grandfather had an extensive classical music collection. I think my father expected me to share more of his musical taste. I would listen to the same music as my children–and with the exception of the boy bands that my daughter liked–I enlarged the scope of what I listened to as a result.

Please Don’t Bother Me When I Am On the Phone

My father would often take calls at home, and over the years, I learned quite a bit about negotiation just by hearing his side of the conversation. When my older son was seven, he drew a Father’s Day card that observed, “Papa talks on the phone.” I suppose I would tell him to stop making noise as my father asked me to be quiet when he was on the phone. 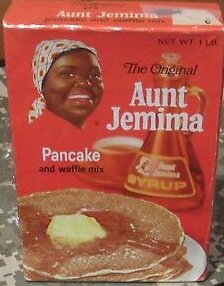 When my parents bought the house I grew up in, my father moved in first, and my mother and I lived with her family for several months as my father worked on remodeling part of the house on nights and weekends. I was almost three, but I can remember we came for a visit, and my father was working in the kitchen with a red checked dish towel tied to his head like a bandanna to keep the sweat out of his eyes. It looked strangely out of place, like a poor attempt to impersonate Aunt Jemima from the pancake box.

Later insight: as I grew up I would also sweat quite a bit from my forehead, so when I worked as a furniture mover or did yard work, I would wear a large red bandanna folded over several times and stretched over my forehead. I would tie it in a simple knot in the back to keep it in place.

“Pop, He Can’t See Your Hands”

We were shopping at Sears for tools and materials and my father called home from a payphone to talk to one of the workmen helping him with the remodeling to get clarity on what he should purchase. He held the phone with his left hand against his left ear and gestured extensively with his right. I suppose it helped clarify his thinking.

Later insight: look for the reason someone is doing something, they have a rationale for their actions.

My father was not particularly helpful with my regular math homework, but fortunately, most of the time, math just made sense to me when a teacher first explained it. It was as if I were remembering the concept, not learning it, at least in grade school and high school. In college, real analysis, differential equations, and the pure mathematics aspects of linear algebra often eluded me. But he was quite helpful when it came to geometry and geometric proofs. He would often doodle complex geometric shapes in the margins of the yellow legal pads he took notes on while on a phone call. I don’t think he was comfortable with algebra but relied on geometric models to reason through problems.

Later insight: I had to learn how to study when things did not come easily.

A Mighty Fortress is our God

I have a very clear memory of our family attending Easter services and singing, “A Mighty Fortress is our God.” There was still snow on the ground, with the Jonquils poking through here and there, and the Easter Eggs seemed easier to find against a white background. That’s the last time I remember us singing together as a family in church. I continued to attend Sunday School, but my parents did not come. Like his father, my father continued to believe in God but drifted away from organized religion.

Later insight: you can go it alone but a community can help you maintain your ethics and help you reach a deeper understanding of moral obligation and action. Christianity embeds a lot of practical insight for living.