Two extracts from “The Poet at the Breakfast Table” by Oliver Wendell Holmes, Sr. on intellect and character, with additional commentary for entrepreneurs. 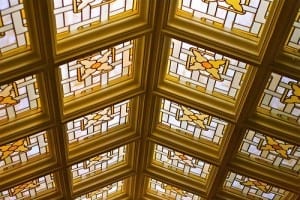 “I applied myself more particularly to the contemplation of the Order of Things…I don’t want to shut out the mystery of the stars and the awful hollow that holds them. We have done with those hypaethral temples, that were open above to the heavens, but we can have attics and skylights to them. Minds with skylights,—yes,—stop, let us see if we can’t get something out of that.

All fact-collectors, who have no aim beyond their facts, are one-story men.

Two-story men compare, reason, generalize, using the labors of the fact-collectors as well as their own.

Three-story men idealize, imagine, predict; their best illumination comes from above, through the skylight.

There are minds with large ground floors, that can store an infinite amount of knowledge; some librarians, for instance, who know enough of books to help other people, without being able to make much other use of their knowledge, have intellects of this class.

Your great working lawyer has two spacious stories; his mind is clear, because his mental floors are large, and he has room to arrange his thoughts so that he can get at them,—facts below, principles above, and all in ordered series; poets are often narrow below, incapable of clear statement, and with small power of consecutive reasoning, but full of light, if sometimes rather bare of furniture, in the attics.”

An interesting model from 1882 by a man who was both an accomplished physician and poet. Holmes developed a theory of infection that paralleled Semmelweis’ theory and was developed based on careful observation and case studies or puerperal infections. He was dean of the Harvard Medical school 1847 to 1853 and was a professor there until 1882.

His model allows for thinking and analysis to be built up from the careful assembly and curation of facts and observations and for inspiration. I think it’s also applicable to entrepreneurial insight that proceed from a mix of careful observation, hypothesis testing, and flashes of insights.

“I should like to see any man’s biography with corrections and emendations by his ghost.

We don’t know each other’s secrets quite so well as we flatter ourselves we do. We don’t always know our own secrets as well as we might.

You have seen a tree with different grafts upon it, an apple or a pear tree we will say. In the late summer months the fruit on one bough will ripen; I remember just such a tree, and the early ripening fruit was the Jargonelle. By and by the fruit of another bough will begin to come into condition; the lovely Saint Michael, as I remember, grew on the same stock as the Jargonelle in the tree I am thinking of; and then, when these have all fallen or been gathered, another, we will say the Winter Nelis, has its turn, and so out of the same juices have come in succession fruits of the most varied aspects and flavors.

It is the same thing with ourselves, but it takes us a long while to find it out. The various inherited instincts ripen in succession. You may be nine tenths paternal at one period of your life, and nine tenths maternal at another. All at once the traits of some immediate ancestor may come to maturity unexpectedly on one of the branches of your character, just as your features at different periods of your life betray different resemblances to your nearer or more remote relatives.

The Poet at the Breakfast table was written in 1872 when Holmes was 63–he would live another 22 years until 1894. I find this passage reminds me of Soren Kierkegaard‘s observation in his 1843 journal that “It is perfectly true, as the philosophers say, that life must be understood backwards. But they forget the other proposition, that it must be lived forwards.” (often condensed into “life can only be understood backwards but it must be lived forward” and plagiarized by Steve Jobs as “You can’t connect the dots looking forward; you can only connect them looking backwards”).

Record to Remember, Pause to Reflect.

Further reflection on past experiences can yield new insights. This is why post mortems on failed startups can be so useful. Freed of the need to hype or justify decisions an entrepreneur can revisit–as a ghost would–past judgement and outcomes and come to new insights.