George Murray offers a wealth of aphorisms in “Glimpse.” 409 to be exact. It’s a fantastic collection, and definitely worth reading 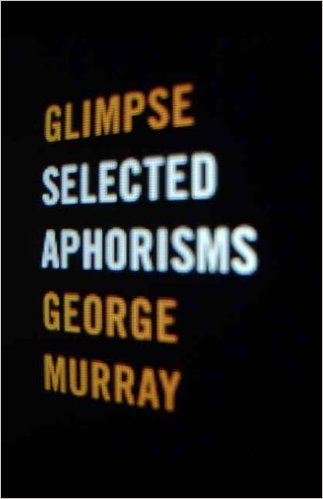 George Murray offers a wealth of aphorisms in “Glimpse.” 409 to be exact. You will be seeing a number of them sprinkled throughout my blog posts and “Quotes for Entrepreneurs” roundups for the next few months.

It’s a fantastic collection, and definitely worth reading if you enjoy aphorisms. James Geary reviewed Glimpse when it came out in 2011 and observed:

“The deep strangeness of the images and juxtapositions takes a while to sink in, mostly because of Murray’s deadpan delivery. Reading his aphorisms is like talking on a phone with a slight delay; you understand what’s been said a beat or so after it has been spoken. And that split-second delay, filled with thoughts and speculation, is where the wonder lies, of aphorisms in general and these aphorisms in particular. The charm of Glimpse is that so many of the aphorisms in it make you do a double take.”
James Geary in Aphorisms by George Murray

Since it’s Sunday I selected these 13 as the more spiritual ones. Those that are more directly related to entrepreneurship will show up on the blog in the coming months.

“Do not discount the stupid bravery of the first to arrive.”
George Murray in “Glimpse“

Pioneers, explorers, people running from their past, and the lost who, looking for something else, often leave before anyone else arrives. I can judge how interested I am in a speaker by how early I arrive and whether I sit: in the back or near the door means I am not sure of the value and may want to leave early, in the middle means I am fairly confident it will be a good presentation but I am not particularly interested in talking with the speaker, and in the front row means I a very confident of the value and want to talk to the speaker–perhaps both before and after the talk.

“The first born drives himself into the world like a nail without a head.”
George Murray in “Glimpse“

As a first born I can relate.

“I am sometimes disappointed by plenty, but too satisfied to do anything about it.”
George Murray in “Glimpse“

The man with four aces never calls for a new deal hoping for a straight flush, nor does the woman with a full house throw away the pair in hopes of four of a kind.

“Coincidence harnessed” could also be :

Stories are more memorable than rules, something to bear in mind when instructing children or trying to change corporate culture.

“Nothing but doubt can hold my attention,
nothing but attention can ease my doubt.”
George Murray in “Glimpse“

Taking the counsel of my doubts and fears is one of my favorite pastimes.

“Your intention is a single rail of train track stretching into the distance.”
George Murray in “Glimpse“

If you work at it you can visualize not just your primary axis of advance but a branching tree of contingencies–at least a Plan B and a  Plan C.

The trick is to recognize and accept the inevitable with as much grace and fortitude as you can summon.

“As we age we study anatomy by witnessing it fail.”
George Murray in “Glimpse“

First our grandparents, then our parents, and then it’s our turn and those of our former classmates.

“There is nothing like the unexpected divorce of friends to remind you that you are not watching closely enough.”
George Murray in “Glimpse“

It’s hard to judge any relationship from the outside unless one of the parties is clearly abusive, or selfish, or alcoholic. A marriage can absorb many mishaps. I think one of the biggest predictors of a long marriage is happily married parents for both parties.

“Sleep is the rough draft of death.”
George Murray in “Glimpse“

Perhaps death is awakening from the sleep of this life.

“There is some part of me that’s eager to find out what I’ll be like as an old man, perhaps a close cousin to that part of me that hopes I ‘ll make it there.”
George Murray in “Glimpse“

As I mentioned in “Connect With Your Purpose” I hope to explore the 2040’s on foot–to not only remain conscious and healthy but also curious.

“Stepping out from the well-lit lobby into full sunshine is a good, painful way to be reminded you don’t know light.”
George Murray in “Glimpse“

We equilibrate so quickly to our surroundings we can forget the true range of possibilities.