This post explores three insights from Dr. Edward Baker’s “Scoring a Whole in One.” First, individuals must understand the enterprise context they operate in; second, leaders must serve and connect; and third, practice is necessary for improvement but does not lead to perfection.

Insights from Dr. Edward Baker’s “Scoring a Whole in One” 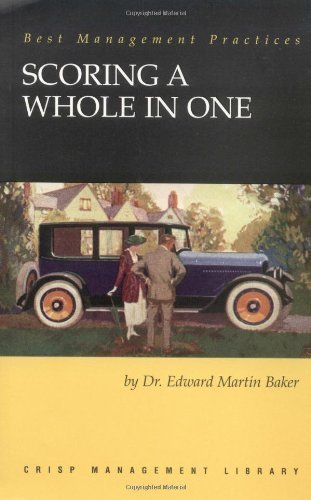 Dr. Edward Baker outlines the premise of “Scoring a Whole in One” in the flyleaf introduction:

“Human enterprise is more productive and rewarding if there is a chance to within a whole-system view. The key element is the interdependence of activity and how it can affect the performance of the whole system. The model envisions working like performing arts systems where harmony and interdependence are assumed. Many managers fear abandonment of tight hierarchical control, but this book offers a new way to organize and measure efforts that recognize interdependent activities.”

This post complements and extends Charles Lambdin’s “Systems as Mental Interfaces.” His post explored key concepts in “Scoring a Whole in One.” He addresses visualizing interactions, understanding interdependence, and avoiding local optimizations that can make the system as a whole worse off. I encourage you to start with “Systems as Mental Interfaces” first. My goal is to explore the soft skills and practices that enable the holistic perspective Baker encourages managers to adopt. My section headings match three section titles from the book:

“The motives, standards, and behaviors found in communities of professionals may provide some ideas about how a system of cooperation might work within an enterprise of free people. It already exists to some extent when people from different companies work together in industry and professional associations for everyone’s benefit.

Michael Polanyi wrote [in “Meaning”] that a free society works best when individuals can choose to cooperate with other individuals to pursue ends that all deem worthy. This is especially evident in the behavior of professionals such as scientists, judges, clergy, artists, writers, journalists, philosophers, historians, and economists. They associate with others in their field to achieve personal aims, yet each is part of the same whole because everyone accepts the same professional and ethical standards and recognizes the same precedents and traditions.

There is no central control, yet a spontaneous ordered whole emerges from the continual interaction of people. There is a system of control; it is one of mutual adjustments and mutual authority. Science, for example, has made tremendous progress operating in this manner. Scientists influence each other through their sharing of information and facts. One’s authority comes from the respect one is given by colleagues for his or her knowledge. Scientists tend to work with others in closely related fields, but science as a whole is a system of overlapping neighborhoods.”

There is a lot to unpack here. I like Baker’s focus on a community of practice paradigm as a way to organize learning and professionalism. He omits two elements that Polanyi included:

Michael Polanyi suggests that scientific research is guided by plausibility, scientific value (a combination of accuracy that ensures trustworthiness, systemic importance, and intrinsic prescientific interest), and originality as measured by surprise at the unexpectedness of the contribution. Plausibility and scientific value encourage conformity to tradition, where originality encourages dissent.

Mutual authority implies a commitment to delegation that enables local initiative and improvisation. Mutual adjustment suggests a shared commitment to negotiating win-win outcomes. Overlapping neighborhoods allows multidisciplinary work on interstitial challenges or opportunities and a flexible approach to team assignments and team charters that may foster some conflict but also collaboration.

If you cannot delegate and want to play zero-sum games the you end up with rigid team and function boundaries that lead to silos and the sub-optimizations outlined in part 1. The end result is small wins for some teams that lead to losses for the firm as a whole. As C. Northcote Parkinson observed, “Perfection of planned layout is achieved only by institutions on the point of collapse.”

Baker opens this section with a reference to a term coined by Robertson Davies, “Fifth Business.” Here is definition from the preface:

“Those roles which, being neither those of Hero nor Heroine, Confidante nor Villain, but which were nonetheless essential to bring about the Recognition or the denouement, were called the Fifth Business in drama and opera companies organized according to the old style; the player who acted these parts was often referred to as Fifth Business.”

He then elaborates on what this involves in a business context.

“There are individuals in various enterprises who play this role. They are almost invisible, but they can be recognized when people say, “I don’t know what she does, but when she’s around, everything seems to go better.” That person is the Fifth Business. She helps people more fully express their individual talents and connect with each other so that the performance can come to life. Such a person does not seek credit: it is not in their nature. Seeking credit is incompatible with the role; the person must stay in the background to be effective. The role is similar to that of ‘servant leader.’

Servant leadership is a term coined by Robert Greenleaf, “A new moral principle is emerging which holds that the only authority deserving one’s allegiance is that which is freely and knowingly granted by the led to the leader in response to, and in proportion to, the clearly evident servant stature of the leader.”

Servant leadership (or “The Fifth Business”) is an underappreciated but essential aspect of any team’s success. In the best teams, every team member is able to subordinate their individual needs to the goals of the team. Will Wright has a similar perspective, “I consider some team members glue: they motivate and improve the morale, they bring the team together tighter and tighter.”

“The business is performing continuously. This makes it impossible before the performance to practice interacting–there is no “before,” there is only “during.” People are continuously rehearsing for future actions, future adjustments. Planning is part of this rehearsal. […]

Whole individuals plan for the whole in which they will act. Planning helps people expand their mental model to encompass more of the ecosystem and thereby learn how to support each other better. They ‘Think Globally, Interact Locally, Make Adjustments.’”

I think Baker’s perspective that business is continuous is a powerful organizing paradigm. Teams are now global, incessant, and transparent. Even bootstrapping startups can now start with a core team of three or four who span a half dozen time zones: someone is always awake.

Paul Saffo has suggested that the “Best strategy used to be ready, aim, fire. Now the best strategy is ready, fire, steer.” I think Baker recognizes that it’s essential to set a direction and get started. It’s hard to anticipate every challenge and setback you may need to manage. But, good enough allows you to begin moving, making adjustments as you continue to head toward your goal.

“The lessons that we constantly forget when it comes to new technologies is: you should never mistake a clear view for a short distance. It’s that sense of standing on a ridge, looking out across a great forest at a distant mountain goal. The peak is so close it seems you could reach out and touch it. That is, until you get in among the trees and start beating your way to the mountain.”
Paul Saffo and “The 30 Year Rule” in Design World Number 24 (1992)

“Well, in opera in a permanent company of the kind we keep up in Europe you must have a prima donna—always a soprano, always the heroine, often a fool; and a tenor who always plays the lover to her; and then you must have a contralto, who is a rival to the soprano, or a sorceress or something; and a basso, who is the villain or the rival or whatever threatens the tenor.

So far, so good. But you cannot make a plot work without another man, and he is usually a baritone, and he is called in the profession Fifth Business, because he is the odd man out, the person who has no opposite of the other sex. And you must have Fifth Business because he is the one who knows the secret of the hero’s birth, or comes to the assistance of the heroine when she thinks all is lost, or keeps the hermitess in her cell, or may even be the cause of somebody’s death if that is part of the plot. The prima donna and the tenor, the contralto and the basso, get all the best music and do all the spectacular things, but you cannot manage the plot without Fifth Business! It is not spectacular, but it is a good line of work, I can tell you, and those who play it
sometimes have a career that outlasts the golden voices.

Are you Fifth Business? You had better find out.”

Robertson Davies in “The Fifth Business“

You can have each new blog post in your inbox

Please enter your E-mail address if you would like to have new blog posts sent to you.