Theresa heard a radio interview with Barry Moltz in 2003 and suggested that I get his book. In December 2003 I purchased a copy of You Need to Be a Little Crazy and when it arrived from Amazon I put it on my to-be-read pile where it languished until early this morning when I read it in one setting, making notes in the margin and jotting down page numbers for quotes I was going to harvest for later re-use on a 3×5 card as I read. 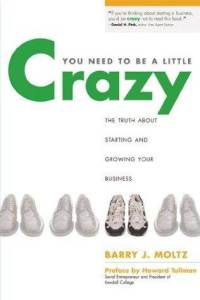 You Need to Be a Little Crazy

This is a great book that I now wish that I had read the week that I got it. It’s only 208 pages but packed with some very powerful insights into entrepreneurship.

I want to quote a long passage from the Preface by Howard Tullman that offers a nice overview of the book and explains why Barry Moltz’s perspective on entrepreneurship is focused on the real issues: Identity, Family, and Failure. The passage was originally all in plain text, I have added bolding to highlight what I consider key points.

When I first met Barry Moltz, I was struck by his unique perspective on the trials and tribulations of entrepreneurship. He took as a given all of the typical questions and concerns (about deal making, valuation issues, control issues, etc…) and turned instead to much more interesting and harder personal issues. Identity. Family. Failure. These aren’t soft subjects and it’s not easy talking about what no one wants to hear. But that doesn’t make them any less important.

Family is important because it’s a much more important extension of ourselves than any work we’ll ever do. There’s always more work but you’ve only got one family.

Failure is important because the first time you win (or lose), it could be luck, it could be timing, or it could be talent. It’s only after you fail once or twice and learn to rely equally on thought, analysis, and anticipation–in addition to speed, talent, and execution–that you can really call yourself an entrepreneur. […] In the long run, it’s mind over muscle, strategy over strength, and a healthy perspective–not just a lot of perspiration–that make someone a real success in his or her business and in the equally important rest of his or her life.

And one final (abridged) quote from Moltz himself in the Introduction makes a point I have made to a number of folks who are not entrepreneurs (sometimes even to their spouses or others they have invited to be “a passenger in the race car”).

Entrepreneurs start businesses because..they have no choice. Passion and energy drive them on good days and sustain them on bad days.

I even remind myself of this from time to time. Some mornings when I am in the shower and contemplating the day ahead, I will remind myself that “This is the life that I have chosen” because it’s never easy and it’s never dull.

15 thoughts on “You Need to Be a Little Crazy”