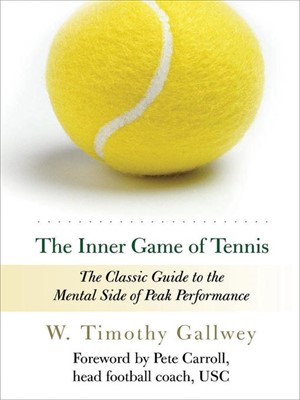 “Neither mastery nor satisfaction can be found in the playing of any game without giving some attention to the relatively neglected skills of the inner game. This is the game that takes place in the mind of the player, and it is played against such obstacles as lapses in concentration, nervousness, self-doubt and self-condemnation. In short, it is played to overcome all habits of mind which inhibit excellence in performance.”
Timothy Gallwey in “The Inner Game of Tennis“

The inner game is about self-mastery.  And the path to self-mastery starts with humility because the humble are willing to observe and listen. As Wynton Marsalis observed: “the humble improve.” This is a tough challenge for any entrepreneur. You have to have the courage of your convictions in starting a new business, but you have to be alert to what you can learn by observing and listening to prospects, customers, partners, competitors, employees, and others.

The First Step Is To See Things As They Are

“When we plant a rose seed in the earth, we notice that it is small, but we do not criticize it as “rootless and stemless.” We treat it as a seed, giving it the water and nourishment required of a seed. When it first shoots up out of the earth, we don’t condemn it as immature and underdeveloped; nor do we criticize the buds for not being open when they appear. We stand in wonder at the process taking place and give the plant the care it needs at each stage of its development. The rose is a rose from the time it is a seed to the time it dies. Within it, at all times, it contains the whole potential. It seems to be constantly in the process of change; yet each state, at each moment, it is perfectly all right as it is.

Similarly, the errors we make can be seen as an important part of the developing process.  […]

The first step is to see your strokes as they are.”

Timothy Gallwey in “The Inner Game of Tennis“

Startups have a natural life cycle that bears little resemblance to the articles in TechCrunch. Too many entrepreneurs judge themselves by the wrong metrics: published origin stories often omit key mistakes and setbacks that are often only disclosed privately.

In my experience it’s exceptionally difficult to get the real story on either success or failure. I have learned about reasons for success and serious mistakes and what people who were less involved thought they were about only a dozen companies. Much of what you read is often not true or a good explanation but not the real explanation.  Real information and insights can be very hard to come by. It’s often better to start with what you personally know to be true or have learned from others you trust who have direct experience.

Jack said, “I’ve always had a terrible backhand. Maybe you can help me.”

I asked, “What’s so terrible about your backhand?”

“I take my racket back too high on my backswing.”

“Because at least five different pros have told me so. I just haven’t been able to correct it.”

[…] What was keeping him from doing it I wondered.

I asked Jack to take a few swings on the patio where we were standing. His backswing started back very low, but then, sure enough, just before swinging forward it lifted to the level of his shoulder and swung down into the imagined ball. The five pros were right. […]

“Your backhand is all right,” I said reassuringly. “It’s just going through some changes. Why don’t you take a closer look at it.” We walked over to a large windowpane and there I asked him to swing again while watching his reflection. He did so, again taking his characteristic hitch at the back of his swing, but this time he was astounded.

“Hey, I really do take my racket back high! It goes up above my shoulder!”

There was no judgment in his voice; he was just reporting with amazement what his eyes had seen.

What surprised me was Jack’s surprise. Hadn’t he said that five pros had told him his racket was too high? I was certain that if I had told him the same thing after his first swing, he would have replied,

“Yes, I know.” But what was now clear was that he didn’t really know, since no one is ever surprised at seeing something they already know. Despite all those lessons, he had never directly experienced his racket going back high. His mind had been so absorbed in the process of judgment and trying to change this “bad” stroke that he had never perceived the stroke itself.

Looking in the glass which mirrored his stroke as it was, Jack was able to keep his racket low quite effortlessly as he swung again.

“That feels entirely different than any backhand I’ve ever swung,” he declared.

By now he was swinging up through the ball over and over again. Interestingly, he wasn’t congratulating himself for doing it right; he was simply absorbed in how different it felt.”

Timothy Gallwey in “The Inner Game of Tennis“

When I first read this passage more than two decades ago it hit me like a lightning bolt. The insight that you had to give someone learning a new skill the ability to see their performance has been brought home to me many times since.

Upgrading my personal presentation skills was much improved–as painful as it was at the time–by watching video tapes of my performance and hearing the instructor critique it while we both watched it. When I started to do video I realized that I could not easily incorporate direction or suggestions for improvement without reviewing the tape. The inner sensation and memory of my performance were no match for watching the recording.

It’s also the case that you cannot tell other entrepreneurs what to do or how to improve.  You can suggest the next waypoint to aim for as an improvement but you have to “run the numbers” with them or meet customers or prospects together and hear it directly, or have them make all of their assumptions explicit in a simple model so that they can be tested.

One corollary is that you cannot be fully immersed in performing a task and trying to critique you performance at the same time. Which means you need to prototype and plan for iterations if you want to improve, much less succeed.

Three approaches entrepreneurs should make extensive use of:

“In the effort to understand how to use technical knowledge or theory, I believe that it is more important to recognize that, fundamentally, experience precedes technical knowledge. […] Words can only represent actions, ideas, experiences. […] When verbal instruction is passed on to another person who does not have in his bank of experience the action being described, it lives in the mind totally disconnected from experience. […] If we let ourselves lose touch with our ability to feel our actions, by relying too heavily on instructions, we can seriously compromise our access to our natural learning processes and our potential to perform.”
Timothy Gallwey in “The Inner Game of Tennis“

I see many entrepreneurs who are trying to follow a Lean Startup approach get caught up in trying to fill out one of the many business model canvases or charts or checklists without developing any real feel for how their prospect understands and assess the value of their offering. I see too many riffs on “lean” and “minimum viable” as a way to substituting verbal gymnastics for a deep understanding of customer needs. Too many conversations in various forum ask questions–or answer them–based on a detailed analysis of a passage from a blog post, article or book without talking about a real situation or need.

This is not to discount the value of a terminology that can be agreed upon by experienced practitioners, but too often it leads beginners into a tangle when they would be better served to describe their situation and view of the problem directly. If they can start instead with how they are experiencing a failure or disconnect, it allows peers or more experienced entrepreneurs to start from their current understanding.

The Usual Way of Learning

The Inner Came Way of Learning

To the extent that you can agree on the goals and are objective about results and how you may try to improve them you are likely to learn much faster.

2 thoughts on ““Inner Game of Tennis” for Entrepreneurs”